Vaccine passports in pubs 'not going to work' says Schofield

With just a few weeks to go until pubs and restaurants welcome patrons back up and down the country, Boris Johnson has hinted at the idea of landlords being able to turn customers away if they haven’t yet had the Covid vaccine. The proposed measure has been met by a number of critics who’ve blasted it as an unfair and unfeasible way to police those wanting to return to the hospitality sector. And This Morning’s Phillip Schofield is just one of those voices blasting the notion, tearing into the idea on the ITV show on Thursday.

The debate of “no jab, no pint” was brought up during This Morning’s Morning View segment.

Phillip and co-host Holly Willoughby welcomed guests Gyles Brandreth and Michelle Gayle on to the show to share their thoughts on the measure – and all were pretty unanimous with their verdict.

This Morning’s Phillip was vocal in his criticism of the supposed policy, insisting it “wouldn’t work”.

The panel also agreed mandatory vaccines for pub-goers would create a system of “haves and have-nots”. 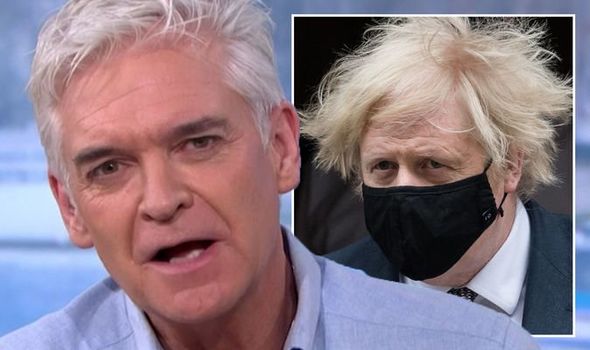 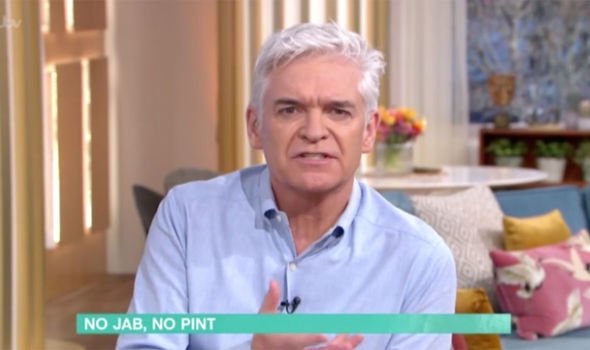 Kicking off his stance, Phillip firmly put to the panel: “Surely then what we’ve created is a have and have not society for a period of time.”

Michelle nodded in agreement as Phillip continued with his rant.

“If that is the case, well, if you’re under 50 you can’t go to the pub, you probably can’t fly, maybe you can’t go out for a meal.

“All of those things that everybody has been looking forward to – ‘Well, yay, I’ve got my vaccine certificate, I’m above 50’… 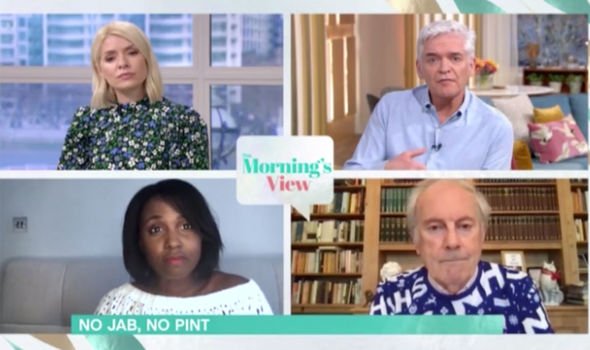 “Surely that’s going to create an enormous, quite rightly, an enormous amount of resentment.”

Gyles and Michelle echoed Phillip’s anger before the This Morning host weighed back in later in the discussion to address Boris directly.

“It’s the fact that – look, not necessarily (people) don’t wanna go out and get drunk, they wanna meet their mates, they wanna sit outside in a park.

“I don’t wanna be sat fiddling about for some (passport). No Boris, no Boris – it’s not gonna work!”

And it appears many viewers at home sided with Phillip and the rest of the This Morning panel’s stance on the issue.

One said on Twitter: “20-45 yr olds use pubs the most. Delaying them going to the pub will kill an industry already on its knees. #ThisMorning #pubs #vaccine.” (Sic)

A second agreed: “@thismorning how can they expect you to have a covid vaccine to go in a pub when a majority of staff are students and under 25year olds. This age group won’t get it yet.”

While a third firmly put: “#ThisMorning any pub, restaurant,  cinema or arena that even asks me for a vaccine certificate will have lost my trade forever.”

However, one viewer was keen to point out: “When it comes to the vaccine passport to go to the pub. Boris never said the government is going to legislate for this but, it wouldn’t be illegal for individual pubs and restaurants to do so themselves.

“It’s unworkable but, bit of an overblown story. #ThisMorning.”

This Morning continues weekdays at 10am on ITV.

03/25/2021 TV & Movies Comments Off on ‘No Boris – not going to work!’ Philip Schofield furious at ‘jabs for pints’ proposal
Recent Posts