The other day Ian Chillag was scrolling through his phone and came across something he’d tapped into his notes app six years ago. He’d completely forgotten about it and what he read both shocked and tickled him. 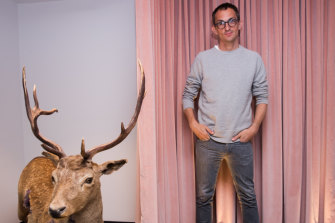 Ian Chillas has interviewed a lamp-post and a grain of sand.Credit:Edwina Pickles

The note read: Found myself getting sad about the fact the food was alone in the dark in the fridge.

“So maybe I was thinking about inanimate objects way back then and forgot about that idea until now,” he says.

Now Chillag’s life is all about inanimate objects. The 40-year-old New Yorker interviews them for his podcast Everything Is Alive, working with improv actors and comedians who take on the roles of a lamp-post, a pregnancy test, a grain of sand, a can of off-brand cola or a set of Russian dolls.

It might seem like a daunting task to turn this concept into compelling audio but Chillag got the best possible grounding in the interview process. The long-time National Public Radio producer got his first break in his early twenties at Fresh Air, working for Terry Gross, one of the greatest interviewers in the business. What did he learn from her?

“I learned a lot, mostly in ways that I didn’t realise at the time,” he says, sitting in a Surry Hills hotel room while in Sydney for the Audiocraft Podcast Festival. “I think the most important thing is being curious. It’s something we do naturally when we’re kids but Terry is someone who still asks those questions. Early on in my time there someone had written a book about blood and Terry asked ‘What’s in blood?’ She doesn’t accept things on face value. She asks the curious questions. She’s not afraid of that.” 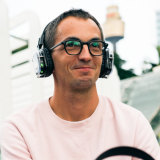 Ian Chillag : “I like to go against type.”Credit:Ash Berdebes

Personifying objects around him has always been a source of humour for Chillag but a year before Everything Is Alive debuted in July 2018, he got serious about turning the idea into a show.

Chillag keeps a list of possible objects that keeps growing. He does some basic research into each one to see if it has potential and his producer keeps an eye on the improv scene for actors and comics who might suit the show. Surprisingly, considering how many of the episodes can arc beautifully from funny and surreal to touching and thought-provoking, the show is unscripted and preparation is kept to a minimum.

“I look for people who are funny but don’t need to be funny all the time,” says Chillag. “If you have too many jokes it punctures the suspension of disbelief. I’m also very deliberate in asking them to do no research. I don’t want trivia or a lot of history. That would make the show like edutainment.

“We get on the phone for around 20 minutes beforehand because usually I don’t know them. We’ll talk about how being the thing they are would inform their personality. With the can of cola, Louis [Kornfeld] was saying things like ‘I bet I’m going to be kind of anxious because I’m going to be on the shelf for a long time and people are always going to be choosing the brand sodas instead of me.’ Maeve [Higgins], who played the lamp post, said ‘I bet I can see into apartments’ and that became the seed of her story.”

I'd like to do the rock that was the first wheel.

Chillag has a few objects he really wants to cover in the future, each with their own challenges.

“I like to go against type. I really want to do a rainbow at some point and I want it to have the lowest, most dour voice. I have this idea I’m not sure about where I’d like to do the rock that was the first wheel, who is still somewhere in the world and has observed thousands of years of human progress.

“And I’d like to do a gun. I feel like I have to wait until I do the show well enough that I can do it right. The show works better when things enjoy being what they are, because it’s more genuine. So the gun has to like being a gun, but how am I going to do that considering the way I feel about guns and people who have experienced guns feel about them?”

And he knows exactly how he wants to eventually end the show.

“The final episode has to be an ice cube played by Ice Cube,” he says, his eyes twinkling behind owlish glasses. “If I can pull that off I’ll retire the show, because what can I possibly do after that?”

07/12/2019 TV & Movies Comments Off on Podcasting: Object lessons from interviews with the inanimate
Recent Posts