It’s no secret that The Bachelor world is plagued by rumors and false stories.

Some of the rumors are confirmed by Reality Steve, and others remain in the rumor mill and eventually settle to the ground.

But some rumors are so outrageous that Bachelor contestants feel that they have to set the record straight, because the rumors may involve their family members.

This week, Peter Weber and Kelley Flanagan learned that there was a rumor about them being engaged.

Someone claimed that they knew someone who had received a save-the-date card for their upcoming wedding.

The only problem? They are not engaged and they are not in the middle of planning a wedding.

Peter and Kelley issued a statement, saying that they were not engaged. Reality Steve thanked them for speaking out and called out a gossip account for spreading unverified rumors.

The account responded to Reality Steve, “Well, you’re rather rude. And no, we don’t post EVERY tip we get.” 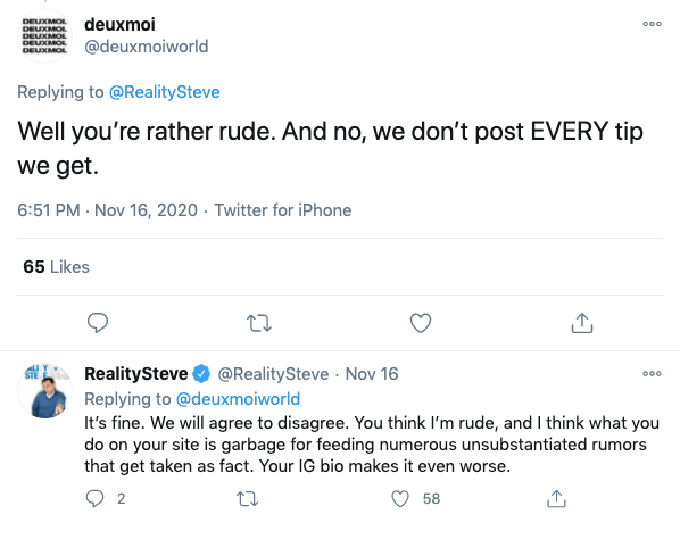 “It’s fine. We will agree to disagree,” Reality Steve shared in response to the gossip account.

“You think I’m rude, and I think what you do on your site is garbage for feeding numerous unsubstantiated rumors that get taken as fact. Your IG bio makes it even worse.”

At the time of this reporting, the account’s Instagram bio reads as follows: “Statements made on this account have not been independently confirmed. this account does not claim any information published is based in fact.”

Reality Steve is happy that the rumor has been settled as he was getting many messages about the rumor.

It was yesterday that Peter and Kelley decided to speak out against the engagement rumors, sharing that they are still very happy and are enjoying getting to know each other on a deeper level after The Bachelor.

They have been open with fans about the future.

The couple has plans of moving to New York City once COVID-19 settles down. Peter isn’t working as much as a commercial pilot these days because of the pandemic. Kelley would like to live in a big city, such as New York City or Chicago, and doesn’t see herself in Los Angeles where Peter was living with his parents prior to The Bachelor.

11/18/2020 TV & Movies Comments Off on Reality Steve calls out blogger accounts who spread fake Bachelor gossip involving Peter and Kelley
Recent Posts
We and our partners use cookies on this site to improve our service, perform analytics, personalize advertising, measure advertising performance, and remember website preferences.Ok