Ramona Singer from The Real Housewives of New York City says she regrets not telling Dorinda Medley she was being way too hard on Tinsley Mortimer. 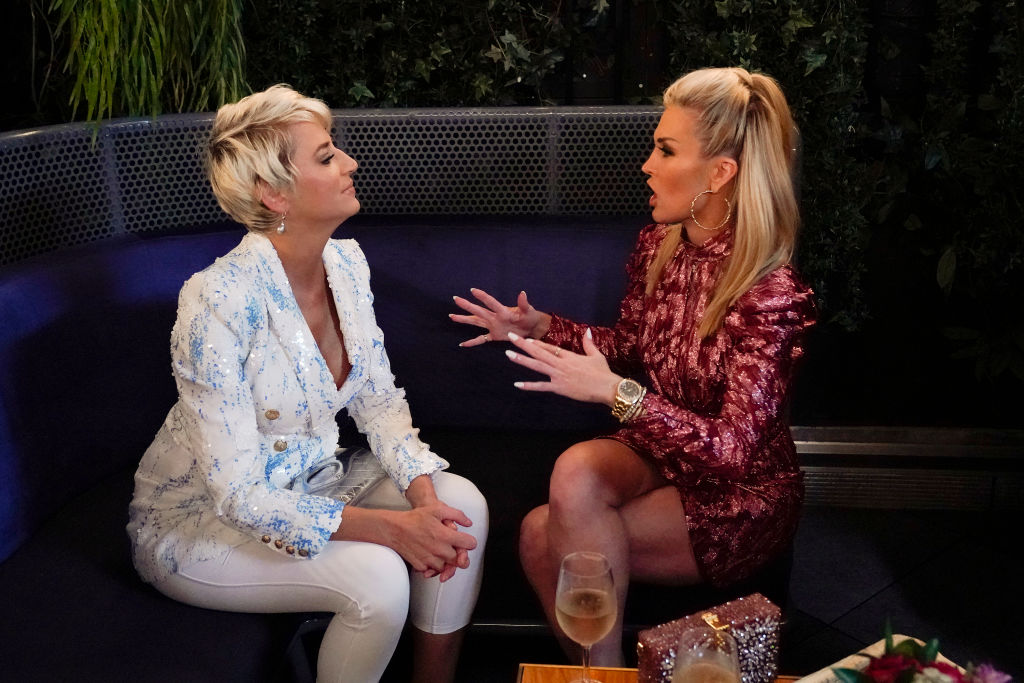 Medley has lashed out at Mortimer all season, starting with the first episode. Medley is irritated that Mortimer doesn’t share every aspect of her life and the rest of the cast is open. A large amount of the intrigue centers on Mortimer’s on and off relationship with Scott Kluth.

The two were broken up at the beginning of the season, but the cast wasn’t entirely sure they would stay broken up. Obviously they were right. Kluth proposed to Mortimer in November and she’s since moved to Chicago, where he is based. While other cast members may not feel as though Mortimer is as open, Medley seems enraged by Mortimer’s behavior.

Singer appeared on Watch What Happens Live with Andy Cohen. During the After Show, host Andy Cohen shared a viewer question about Medley and Mortimer’s dispute. The viewer wanted to know which side Singer was on, but Singer says she refused to take sides. Well … sort of.

“I really was on Tinsley’s side,” she admits. “But Dorinda has been very … erupting so easily, that I felt not to take a side would maybe quiet her down.”

Getting glammed up to go on with @bravoandy @bravowwhl tonight with @pamelaanderson. I love wearing my night gowns around my home !

RELATED: ‘RHONY’: Ramona Singer and Sonja Morgan Get Shady About Each Other’s Weight

However, staying quiet was maybe not the right thing to do. “I do actually regret not telling Dorinda that she’s being way too hard on Tinsley and just shut up,” Singer adds. “It’s not right.”

Prior to her appearance on WWHL, Singer shared a photo of herself wearing a nightgown while getting her hair styled. Her stylist is wearing a mask, but Singer is not. She ended up getting a slew of remarks from fans about the image. “He’s wearing a mask to protect you but you aren’t doing anything to protect him!!!” She also shared a video of the same scene telling viewers she loves her music and little nightgowns while she’s hanging in the house.

Medley admits the season has been tough to watch

Medley is aware that she’s been unhinged this season and said watching events play back has been difficult. “Yes. Absolutely it was a tough episode to watch,” she told Us Weekly. “But I think the thing is — that there’s a lot of things going on and obviously we can’t break the fourth wall.”

“There’s a lot of things coming up and a lot of things, like, that I am going through myself that are making me definitely on edge and uptight,” she added. “I think I say it at the winery — I just feel vulnerable and scared and overwhelmed.”

She reflected on the flood at Blue Stone Manor and breaking her rib. “I literally would cry to my mother, ‘I don’t know what’s going on. Nothing’s working out anymore,’” she said. “And she would say to me, ‘It’s exactly where it should be. There is a reason. Well OK, you broke your rib. Guess that means you got to slow down.’”

Related posts:
05/22/2020 TV & Movies Comments Off on 'RHONY': What Does Ramona Singer Regret About Dorinda Medley and Tinsley Mortimer's Fight?
Recent Posts
We and our partners use cookies on this site to improve our service, perform analytics, personalize advertising, measure advertising performance, and remember website preferences.Ok