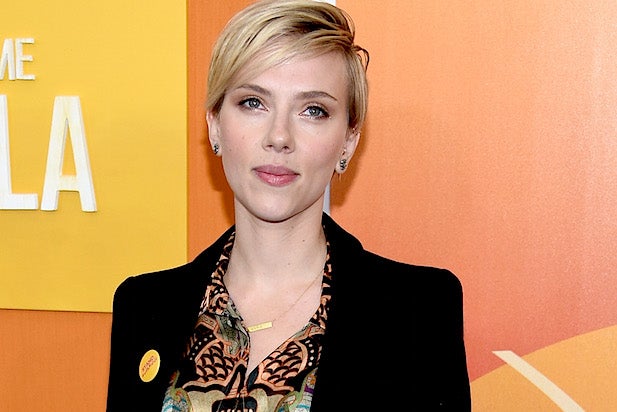 Scarlett Johansson said Sunday that portions of an interview she did with As If magazine discussing diversity in casting “has been edited for click bait and is widely taken out of context.”

In the piece published in Daily Mail Saturday, Johansson was quoted from the As If story responding to critics who objected to her playing a transgender man in the film “Rub & Tug,” and saying, “You know, as an actor I should be allowed to play any person, or any tree, or any animal because that is my job and the requirements of my job.”

Johansson tells TheWrap, “The question I was answering in my conversation with the contemporary artist, David Salle, was about the confrontation between political correctness and art. I personally feel that, in an ideal world, any actor should be able to play anybody and Art, in all forms, should be immune to political correctness. That is the point I was making, albeit didn’t come across that way.”

Her statement continues: “I recognize that in reality, there is a wide spread discrepancy amongst my industry that favors Caucasian, cis gendered actors and that not every actor has been given the same opportunities that I have been privileged to. I continue to support, and always have, diversity in every industry and will continue to fight for projects where everyone is included.”

“Rub & Tug,” the film that triggered the line of questioning, is based on the life of Dante “Tex” Gill, a massage parlor owner in Pittsburgh in the 1970s and ’80s, who, according to an obituary, was known as “the woman who prefers to be known as a man.” The Pittsburgh Post-Gazette obit also said Gill may have undergone “the initial stages of a sex change that made her appear masculine.”

Online critics took that to mean Gill was a transgender man, and questioned whether Johansson, a woman, was the right person for the role.

Johansson, ultimately, exited the movie as the backlash grew.

“In light of recent ethical questions raised surrounding my casting as Dante Tex Gill, I have decided to respectfully withdraw my participation in the project,” Johansson told Out Magazine. “Our cultural understanding of transgender people continues to advance, and I’ve learned a lot from the community since making my first statement about my casting and realize it was insensitive. I have great admiration and love for the trans community and am grateful that the conversation regarding inclusivity in Hollywood continues.

Johansson faced similar criticism for starring in 2017’s “Ghost in the Shell.” The character was Asian in the original manga comics, which earned Johansson criticisms of white washing.

The three limited-edition As If art covers with Johansson is available for order now.

07/14/2019 TV & Movies Comments Off on Scarlett Johansson: My Comments on Casting Were 'Edited for Click Bait'
Recent Posts