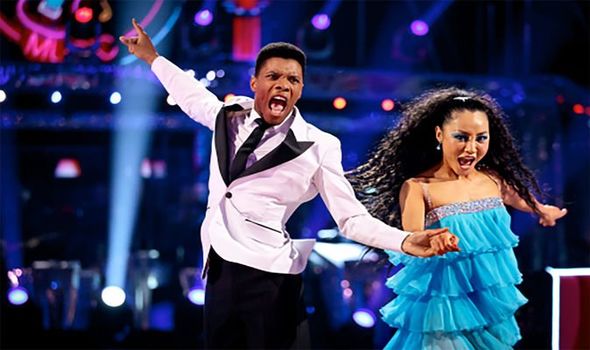 The presenter said: “I’m playing Miles Morales from 2018 film Into the Spider-Verse. Nancy plays Spider Gwen, so it’s not a case of Spider-Man and a damsel in distress.

Rhys, who grew up in Romford, east London, added: “We’re playing these new Spider characters, but we’ve got the original music, with a bit of a hip hop vibe, so the young and older audiences will really be able to connect to it.”

Rhys, 27, said: “I came to Strictly quite late… I was already at uni”. He recalls the first time he watched the BBC show and was hooked by the jive from The Wanted’s Jay McGuiness and Aliona Vilani in the 2015 series.

“I’ll always remember my dad just flicking randomly on to Strictly and it was the Pulp Fiction dance. Ever since then, the jive’s been my favourite. They absolutely smashed it and I thought, ‘Right, I need to watch them win the whole series’ – and they did.

“So it’s a really special week for me. I like the idea that there could be a little boy or girl out there now who might flick past the show, see our dance, and become a lifelong fan like I did.”

Rhys and Nancy have already impressed the judges so far. They came third on the leaderboard in week one with a stunning Viennese waltz and they opened last week’s show with an energetic cha-cha-cha.

Rhys, who joined the National Youth Theatre in 2013, hopes that losing himself in a character will help to take the edge of the nerves he has struggled with.

The presenter said: “”I love being on the stage, but it’s always the bit before that’s the worst.

You feel like you can’t really move until you take a tentative step on to the stage and see the crowd and your energy builds again.

“I’m hoping this week will be different because I’m playing a character, and I’ll be coming out throwing web shooters and stuff like that!”

Rhys has a positive attitude about judges’ comments – unlike some other celebrity stars – even Craig’s vicious take-downs – which he sees as “a service”. Rhys said: “They’re all lovely. Craig’s lovely too. Everything he’s said I’ve agreed with. They don’t want you to fail. All Craig is doing is saying the truth. It’s all constructive criticism.”

Rhys looks back to the day he told his family (parents Sandra and Michael and younger sisters Zhaania and Michaylia) that he was appearing on Strictly.

“I had on a T-shirt and opened my shirt and revealed it to them like that,” he says. “My sisters screamed, one of them jumped on me.”

Rhys is also an ambassador for Place2Be, a children’s mental health charity. He says that he feels Britons need to take mental health “seriously” if the country is to overcome the impact of the pandemic.

However, at the moment he is fixed on winning the Glitterball prize. “I think Nancy and I are the right sort of competitive,” he added. “I’d rather win with everyone at their absolute best.You want everyone to excel and be proud of themselves.”