In the end, The Big Leap‘s production of Swan Lake really soared. But can the same be said of its dancers and their love lives?

The Season 1 finale opened with the cast and producers giving post-mortem confessional interviews about the show-within-a-show’s live finale, which was — in Mike’s words — “a real s–tshow, a total clusterf–k.” He’s not wrong: The blackout caused by Alan’s plugging in his mini Christmas tree caused the entire theater to fall into chaos. As Nick tried to breathe his way out of a panic attack, Aja (who is an electrician) and Mike ran to the breaker to see if they can fix things, and Brittney and Simon scurried to the drugstore for flashlights, batteries and a home pregnancy test. (Turned out, Brit was two months late.)

Eventually, the show got underway, with the dancers using hand-held lights to illuminate their moves, the audience training their mobile phone flashlights on the stage to help and production trucks routing their power inside to run the cameras. Nick lamented that the show was a bust before it even got underway, but Monica kissed him and told him it would be fine, which helped. 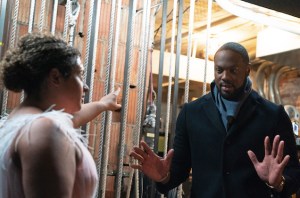 Aja managed to get the electricity turned back on by the middle of Justin’s first number, and Reggie made it back just in time to surprise Gabby by standing in the wings during her debut dance. But the shock of his arrival caused her to fall, which angered her so much that she ordered him to forego his grand gesture and go watch the finale from the green room.

Meanwhile, Nick was so high on the reformative/restorative power of dance that he asked Monica to join him for a month-long holiday in the United Kingdom. She said she’d think about it, and seemed inclined to say yes. But when discussing the matter with Wayne later, his hot mic picked up her musing about how Nick was a “sleazy reality-show producer” — which was really just posturing, because she very much wanted to accompany him on vacation. Nick didn’t hear the part where she said she really wanted to go… and after Monica stepped in to join House of Lush for their number, Nick found her to rescind the invitation, calling their relationship “transactional” after all. Both of them pretended like their hearts weren’t broken, and sigh.

Why did Monica join House of Lush on stage, you might wonder? Because she fell through a hidden (and poorly maintained) trap door, hurting her foot and stranding herself there… until Justin fell through, as well. They eventually made it out, and she learned that she was, indeed, pregnant with Reggie’s baby. But she admitted that she’d pressed Simon to break up with Justin and prompted Justin to tell her brother how he really feels about him.

Amid all of this, Mike danced his number without Paula — but with some young dancers from her program standing in, which was sweet — and Gabby was a vision in her empowered final routine. “In that moment, I felt about me like I feel about Sam,” she later told the confessional cameras. “Like I want to protect me, and like I love myself. And I was proud of myself. And it was suddenly so clear that there is always another chance for everybody, and you just can’t always see it right away.” And when Reggie stepped on stage to fill in for the missing Justin, at Nick’s insistence, she wasn’t willing to back down so easily. “We can grab an afternoon coffee!” she told him, which slightly mollified the “Grabby” ‘shippers in the audience. (Later, she dragged him backstage for a makeout session, of course. The woman’s not crazy.) 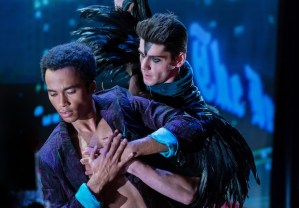 Just then, Justin rushed in to tell Simon that he loved him, and they un-broke up. In a sweet confessional interview later, Justin introduced Simon to his dad and brother, who were kind to — if not completely comfortable around — Justin’s new man.

While everyone was celebrating the end of the live show, Nick found the drugstore receipt and realized that Brittney was preggo. He offered her an increased role in Season 2, adding “Everybody loves to hate you,” which didn’t make her happy. Then Gabby, who was completely in the dark about the pregnancy, gleefully accepted Nick’s offer to be a choreographer on Season 2 — not realizing that he was setting up another round of Gabby vs. Brittney (and possibly Monica?). And then Nick wrapped it all by telling Wayne he was definitely in for another season: “It’s gonna be full of surprises.”

TVLINE | This episode seemed like a much bigger production than most of your other episodes.
Oh my God. It was huge. It was huge. There were over 120 scenes in this episode. It was crazy. We had to really wrangle it and make some hard choices about what to include, but Jason Winer — who directed the pilot and the second episode and has been an EP on the show and has been my partner through all this — is so talented. And he just was not letting me make it too small. He just kept saying, “Yes. You can do it. You can do it. You can do it.” It wasn’t going to be a problem. Yeah. [Laughs] It’s huge.

TVLINE | Talk to me about some of those hard decisions you had to make about what either to cut or leave out of the last episode.
Gabby’s son and mother were not on the finale, which was a giant bummer. And Mike’s three guy friends who like are so, you know, willing to talk about feelings. [Laughs They are not on the finale.

TVLINE | I definitely did not notice until you just said that, which probably makes me bad at my job.
[Laughs] Well, no. I mean, it’s really fast and furious, and there’s a lot of scenes, and it’s really bold… Part of that is also, you only have 42 minutes and change on a network show to tell whatever story you’re telling. 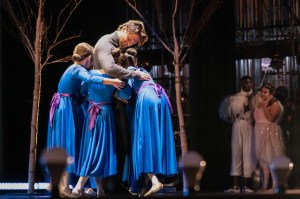 TVLINE | The show excelled at giving us fleshed-out supporting characters. I’m wondering if there were any that you wished you’d had more of a chance to delve into or who might be primed for more screen time in a potential Season 2.
Oh. Sure. What I’m happy about is that we were able to get into, like Comfort Fedoke, who’s such a beautiful dancer, who plays Aja, who’s part of House of Lush. It was really great that we got to slowly give her more and more and more to do. She’s actually one of our choreographers on the show, too, so she does double duty for us. The House of Rush is a really good example of characters that are totally primed to explore more in a Season 2.

TVLINE | I don’t think I’ve ever talked to someone whose show is on the bubble for Season 2 about a show that so heavily references getting a Season 2 in its finale. The meta aspect here is real.
Oh, my God. It makes me blackout sometimes. [Laughs]  You just can’t not do it on the show. You have Thomas Lennon playing the network executive and Scott Foley [as] know, Nick, who’s the showrunner, who I very heavily identify with. It just is so much fun to get into those questions about a potential Season 2 and about what you have to do to get the Season 2 and the overnights [ratings] and all that stuff. It was just such low hanging fruit for us in the writer’s room that we just couldn’t not do it.

TVLINE | A few weeks back, there was news that the show wasn’t getting a pickup for a full season. But this finale feels like a definite stopping point. Was this a fully formed season?
It was always going to be 11 episodes. We talked about it a lot in advance of the [initial] pickup about whether we were going to be fall or mid-season, but it was always a closed-ended season that was going to end in the final performance of Swan Lake. 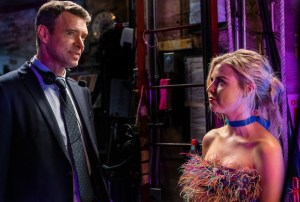 TVLINE | Let’s say you get a renewal tomorrow. What’s the first character or storyline that pops into your head, like, “I can’t wait to dig into this?”
We set it up in the finale, with the pregnancy and the Gabby/Brittney/Reggie triangle, and so that’s a story that we’d immediately start leaning into.

TVLINE | Which reminds me: When we (and Gabby) initally saw Brittany with Reggie, we saw some, to put it delicately, non-baby-making activities. But obviously, there was more happening there that we weren’t privy to?
[Laughs] They were together a little bit. They were hooking up. For him, it was casual. For her, it meant a little bit more.

Now it’s your turn. Grade The Big Leap‘s finale and Season 1 as a whole via the polls below, then hit the comments with your thoughts!