Plus, Malcolm Spellman offers a few hints about the “new” Captain America 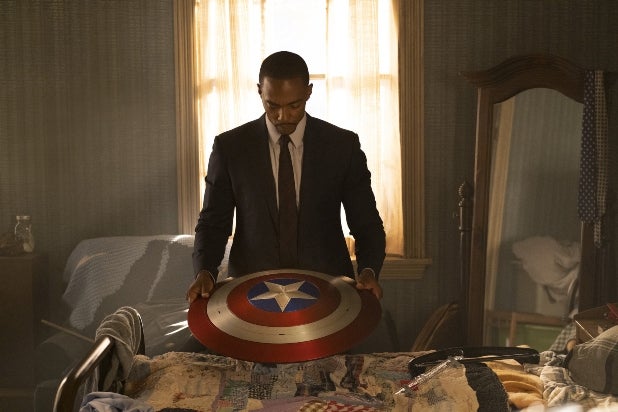 (WARNING: The following post contains spoilers from the premiere episode of Disney+’s “The Falcon and the Winter Soldier.”)

There’s no way to put this nicely: Sam Wilson (Anthony Mackie) gets royally screwed over by his own government. Following his noble gesture of returning Steve Rogers’ shield so it could be part of the Captain America Smithsonian exhibit, he gets thanked by it being handed over, along with Cap’s name, to Wyatt Russell’s John Walker.

“Well, a Black man being betrayed by his government?” Malcolm Spellman, head writer of “The Falcon and the Winter Soldier,” told TheWrap. “It is a profound situation he find himself in, because it’s a common situation.”

Spellman added that Sam being forced to watch some unknown white guy take over his old friend’s mantle is part of why he felt like he couldn’t take on the Captain America mantle himself. If you’ll remember, an elderly Steve Rogers (Chris Evans) hands Sam his shield at the end of “Avengers: Endgame,” to which Sam replied back that it feels “like it’s someone else’s.”

Sam apparently takes those words to heart, which makes that final scene all the more painful to witness, Spellman says. “It’s the reason he said ‘No’ to the shield. The doubt that this nation is ready to move into the future for him is alive and urgent, and in every scene he’s in. It’s a difficult journey for him.”

As far as John Walker, we don’t find out a whole lot about him, given he only shows up at the very end of the episode and doesn’t have any lines. In the comics, Walker, who also goes by the name U.S. Agent, serves as a replacement for Steve Rogers after he abandons the shield and gives up being Captain America. It doesn’t go super smoothly, as Walker, who possesses the same super soldier abilities, is a more aggressive version of Captain America (though he initially does his best to live up to the ideals behind the shield).

Spellman says Wyatt’s version of Walker  will be different than what comics readers might expect.