Jordan Peele was the perfect filmmaker to bring back “The Twilight Zone,” melding his dark satire with Rod Serling’s. The result makes an uneasy bridge between past and present, where fear, paranoia, and hate continue to rip away at the fabric of American society. And this is apparent in “Nightmare at 30,000 Feet,” a re-imagining of the William Shatner-starrer, “Nightmare at 20,000 Feet,” which slips comfortably beside Peele’s “Get Out” and “Us.”

For production designer Michael Wylie and editor Scott Turner, the challenge was to channel both Serling and Peele in this story of PTSD-suffering journalist Justin Sanderson (Adam Scott), who discovers a strange podcast aboard Flight 1015 that predicts their crash which he inadvertently helps facilitate. “We wanted to pull in some of the flavor of the original, not only because it’s incredibly familiar to everyone but because we’re trying to create a timelessness in the show, and a more old-fashioned kind of airplane really helped,” said Wylie of the Emmy-submitted episode.

Because “The Twilight Zone” exists in a parallel universe, you see a production design split between the new and old. While the airport contains computers and scanning equipment, we step into a retro-looking plane. “We wanted to build an airplane that was an homage to the Shatner episode,” Wylie added. “If they could have an art-directed, almost fake-looking plane, so can we.” 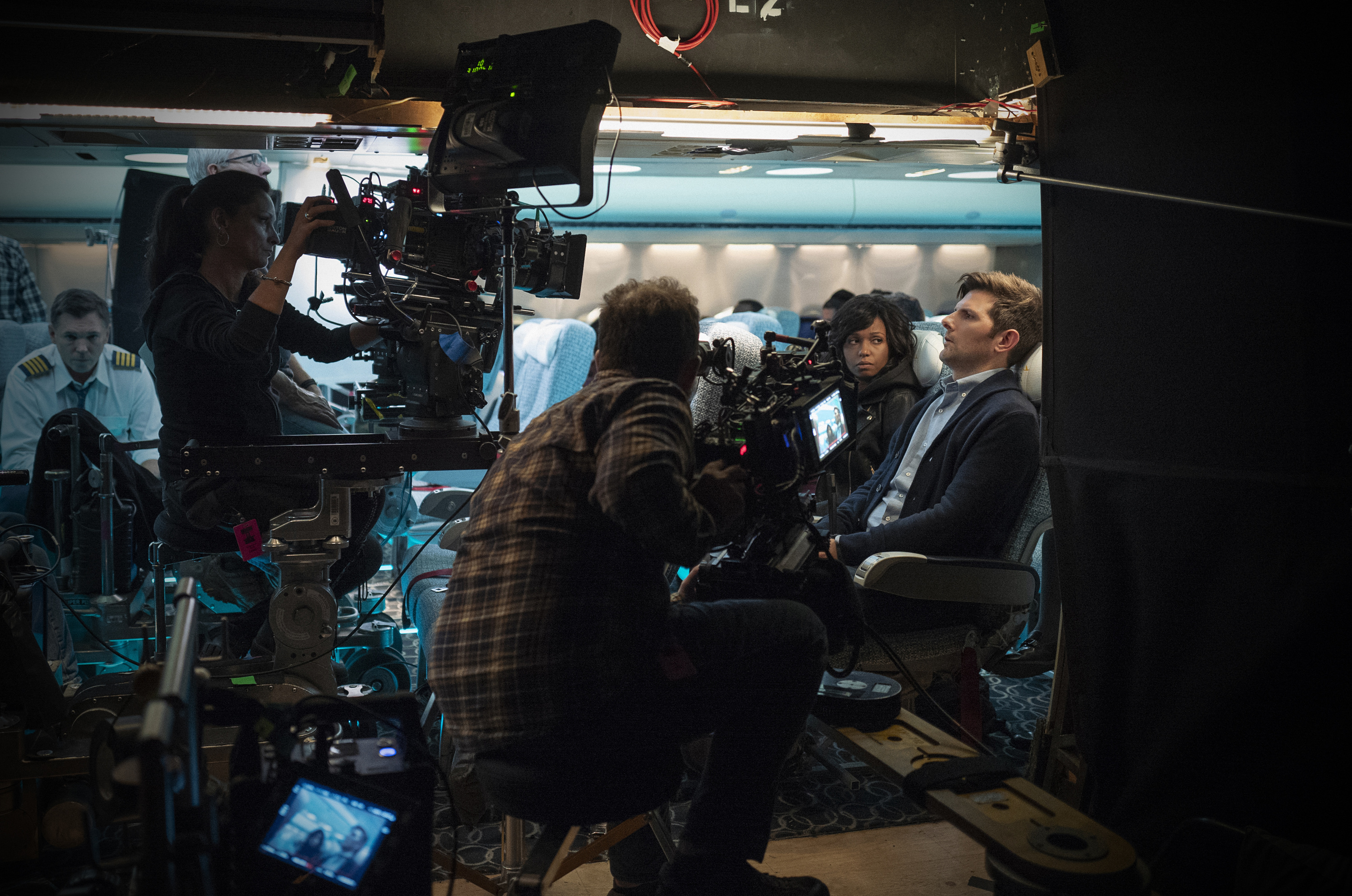 They rented an airplane set from Los Angeles and had it delivered to the stages in Vancouver. It was then reassembled and set dressed with old-fashioned carpeting, wall papering, and seat covers. “You get on the airplane and there’s still a bar cart and these other [retro] touches,” Wylie said. “He’s listening to a podcast on what looks like an old transistor radio with clunky buttons. We carefully thought out a design scheme to keep the viewer from not being able to have a touchstone in reality, which helps to tell this story of things that happen to people that may or may not be possible.”

The lighting was also integrated into the design, with LEDs strung throughout the ceiling and along the tops of the windows in different configurations. “Once the lights were on, they could lighten and darken things and change the color temperature of the lights,” Wylie said.

The claustrophobic setting fed into the editing style as well, with escalating fear and paranoia. There are lots of tight shots overall and numerous close-ups of Sanderson, alternating between his watching the passengers and being eyeballed by them as well. “Adam does a great job of modulating his performance, starting off as an over-anxious passenger and building to where he doesn’t know what reality is,” Turner said. “And there’s a cry wolf element in there as well. 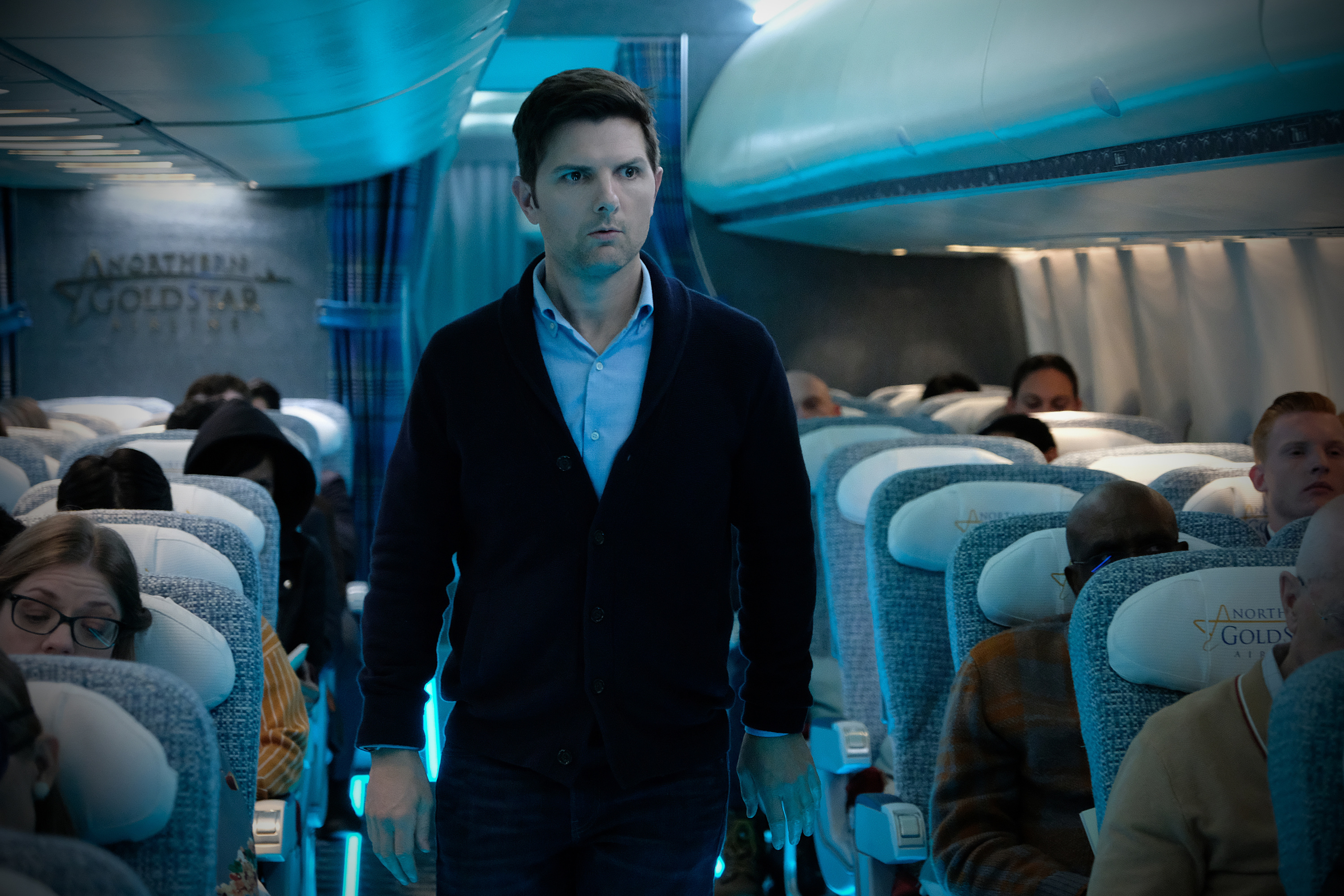 Finding the right rhythm for the podcast, meanwhile, became a mini-editorial challenge. Political commentator and podcaster Dan Carlin (“Hardcore History”) provided the voice over for his celebrated camp fire-like ethos. “Dan came in to do the voice over relatively late in the process, and so I substituted my voice as a temp for pacing,” Turner said. “I was trying to imagine how he’s going to sound as a reader, moving fast enough to create suspense, but also drawing it out enough to create mystery. When Dan came in, I was able to see how he played the character and then land it in the right spot, the way he draws you in, especially that podcast of ‘Hardcore History.’”

For the ironic twist on a desert island, the editor culminated the sense of paranoia with wider and wider shots before revealing the payoff. “And I really like how they integrated Jordan on the beach as well and had him walk into camera to do his finale,” Turner said. “I think that’s more playful and adds a devilish quality that Rod Serling had.”