For two extremely promising acts, The Voice’s Tuesday episode dished out a harsh slice of life: They were sent packing following their Knockouts performances. But for Blake Shelton, Kelly Clarkson, John Legend and Ariana Grande, the installment served up actual cake to celebrate the show’s 500th episode and the fact that, per Carson Daly, it had become “the most-watched television show of the decade on a single network.” Which of the evening’s vocalists made it a show worth watching? Read on, and after I raid the fridge for cake crumbs — even a frozen waffle? — we’ll discuss. 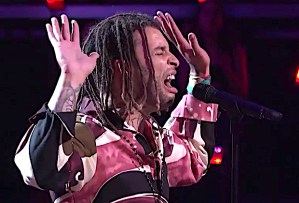 Team Legend: Samuel Harness singing “Bruises” (Grade: A+) defeated BrittanyBree singing “Best Part” (Grade: B+) | After a rehearsal in which BB was encouraged by her coach and mentor Ed Sheeran to be vocally a little tenderer, less belt-y, and Samuel was told to maybe remain chill through the verses so that his chorus could really explode, the teammates hit the stage. Singing first, BrittanyBree opened her mouth, and out poured a pitcher full of warm sunshine. Her jazzy performance played like a love letter come to life. Following her up to the mic, Samuel unleashed a vibrato that sounded like a shiver in his throat, then a kickass rasp that did more to clean out my ears than a Q-Tip ever did. He was so raw, so fierce, so emotionally open and present, I couldn’t believe Kelly didn’t join the other coaches in giving him a standing O. Beyond impressive, unbeatable.

Team Kelly: Hailey Mia singing “Arcade” (Grade: A-) defeated The Cunningham Sisters singing “Oceans (Where Feet May Fail)” (Grade: C+) | After running through their respective numbers for Kelly and Ed, Hailey was advised to check the nerves before she started (’cause once she had them under control, she slayed), and the sibs… They had their arrangement stripped down by Ed to highlight their voices rather than the band. The kids also had Ed demonstrate for them that “you can achieve anything in this world” by playing them an old clip of himself singing hilariously out of tune. On stage, Hailey delivered a solid, confident performance that was impressive, period, never mind the fact that she’s 13. Up second, hmm. Now you know I love the C Sisters — there are baby bunnies that only wish they were that cute — but here, some of their harmonies weren’t as tight as they needed to be. And though they certainly happened upon a lovely moment now and then, the overall impact of their number was an unfortunate “eh.” 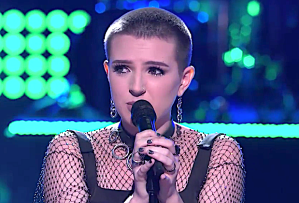 Team Ariana: Ryleigh Plank singing “Midnight Sky” (Grade: B) defeated David Vogel singing “Lose You to Love Me” (Grade: A) — David stolen by John | Following David’s run-through of his Selena Gomez cover, Ed marveled that he was making the song a stadium anthem with only an acoustic guitar for accompaniment. Neither he nor Ari had any notes, they were just wowed. As for Ryleigh, Ed suggested that she take her Miley Cyrus number half a step down to ensure that she could hit the notes with confidence. And in the moment of truth, Ryleigh put forth an energetic performance that had a bit of a theatrical flair to it. She obviously has a fine, range-y voice, but this felt disjointed — like a bunch of interesting puzzle pieces that didn’t necessarily come together to form the same puzzle. Not bad, just not a slam dunk. By contrast, David gave a very cohesive performance that played like a confessional. Sure, he got cheers just by tossing his lustrous mane, but he earned his bigger applause with a rock-solid vocal that gave the impression that he was singing with his heart in his throat.

So, who did you think gave Tuesday’s standout performance? Would you have used a Steal to keep BrittanyBree or the Cunningham Sisters instead of David? Vote in the poll below, then hit the comments with your thoughts.