The Netflix series, The Witcher had a riveting first season about Geralt of Rivia (Henry Cavill) and his intertwined destiny with Princess Cirilla (Freya Allen) and Yennefer (Anya Chalotra). The storyline for the season had four different timelines fans had trouble piecing together. Two of the timelines occur simultaneously, while Cirilla’s take place in the present. Soon the stories of all three characters intersect.

[Spoiler warning: This article contains spoilers for The Witcher Season 1.]

Trying to understand the timeline in The Witcher can get a bit confusing. According to Forbes, Yennefer’s journey takes place first, despite being introduced in episode 2. The story begins in 1210 when Yennifer is sold by her father to Tissaia de Vries (MyAnna Buring) and taken to Aretuza. She goes through her training, her grand transformation and attends the ball.

At the same time Yennefer’s story occurs, Geralt of Rivia meets Renfri (Emma Appleton) in episode 1 of The Witcher. He is given a small reminder of his destiny and is nicknamed the “Butcher of Blaviken.” In the series’s second timeline, there is a time jump. 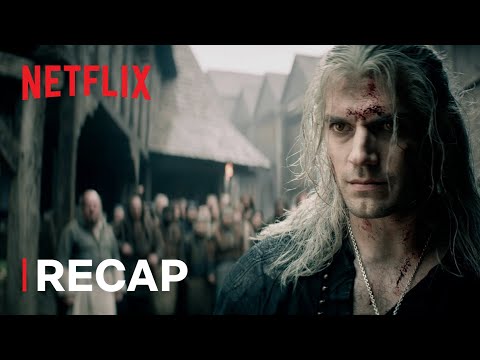 The second timeline is more about Geralt and Jaskier (Joey Batey). After Yennefer’s story and Geralt meeting Renfri, there was a time jump of roughly 30 years. At a town pub, Geralt meets Jaskier. Keep in mind Geralt ages slower than normal humans.

In this timeline, Jaskier coined the famous song “Toss A Coin To Your Witcher.” The duo takes a job from King Foltest of Temeria (Shaun Dooley) about a striga. While this story occurs, Yennifer is escorting Queen Kallis of Lyria (Isobel Laidler), who is ultimately assassinated.

Timeline #2 can easily be tied into timelines #3. Some time has passed, and Jaskier and Geralt attend Calanthe’s (Johdi May) feast for Pavetta (Gaia Mondadori). This is where Geralt saves Pavetta’s cursed true love and takes the Law of Surprise as the reward. Everyone soon learns Pavetta is pregnant.

Later on, Geralt and Yennefer meet for the first time trying to save Jaskier from a djinn-inflicted wound. Sometime later, they meet again while trying to find a dragon.

An important factor about Cirilla’s timeline and story is that it occurs in the present in The Witcher. Fans are watching the evolution of the rest of the characters’ storylines leading up to Cirilla’s timeline. Fans are already aware of what happened to Cirilla, her powers, her grandmother, and the Nilfgaardian Empire taking over Cintra.

After many years in Geralt’s timeline, it starts to catch up to Cirilla’s. He returns to Cintra to take her due to the Law of Suprise after realizing she might be in danger. Calanthe refuses and has him arrested. This is where the beginning of Cirilla’s timeline occurs.

Cintra is attacked, and Geralt misses Cirilla by only seconds. Everything that happens to Cirillia, from escaping to the forest, being aided by allies, and escaping Nilfgaard, occurs as Geralt wanders the forest and fights monsters.

At the same time, Yennefer and the other mages band together to fight Nilfgaard. When a man takes Geralt to his home to rest from his wounds, he learns the wife took in a young girl. Geralt realizes destiny has finally arrived and finds Cirilla in the forest.

12/08/2021 TV & Movies Comments Off on 'The Witcher': Breaking Down the Different Timelines in Season 1
Recent Posts