“Yellowjackets” is a series you might think you’ve seen before. Feature films like “Alive” and “Lord of the Flies” have shown what happens when people, especially children, are stranded in an isolated location and turn to the darker side of living off the land. Even Amazon Prime Video’s “The Wilds,” released earlier this year, has a similar situation of teen girls surviving a plane crash. But none of them are quite like what creators Ashley Lyle and Bart Nickerson have done with “Yellowjackets.”

Set in 1996, the Yellowjackets are a high school girls soccer team whose success at the game gives them a bid at Nationals. Unfortunately, their plane crashes into an unknown wilderness, leaving the girls to survive on their own. Stranded in the woods for 19 months, the few who returned have all gone wildly different paths, but it’s clear that what happened in the woods might run deep into their blood.

The opening scene, showing a young woman running in the snow only to be impaled by some sort of trap gives you a good indication of what the team does to survive those 19 months. But it’d be too easy to give audiences all that at once, so the wilderness narrative runs alongside what the surviving Yellowjackets have been doing with their lives 25 years later. And, like most high school narratives, the answer is they haven’t done a whole helluva lot.

Shauna (Melanie Lynskey), who once had plans to attend Brown University, is a housewife with a terrible daughter and an absentee husband. Lynskey’s perfected playing the disaffected woman who’s underestimated at every turn; she’s also superlative at playing a woman who could easily kill you. As a youth, just as adeptly played by Sophie Nelisse, Shauna is deemed the less attractive, chunky best friend to the teen queen Jackie (Ella Purnell) and it’s something Lynskey lets thrive as an adult. It’s obvious Shauna still internalizes the high school belief that she’s less than and her “screw it” attitude toward it all sees her engaging in a relationship with the kindhearted Adam (Peter Gadiot) who is open to letting her relive her teenage dreams.

Her life feels far more normal than that of Natalie (Juliette Lewis), a hard-drinking and drugging rebel recently out of rehab. Or Misty (Christina Ricci), a hospice nurse whose idea of humor is tormenting her patients. Then there is Taissa (Tawny Cypress), who is running for public office and fears what’s happening to her young son, who claims he’s seeing a lady in a tree. 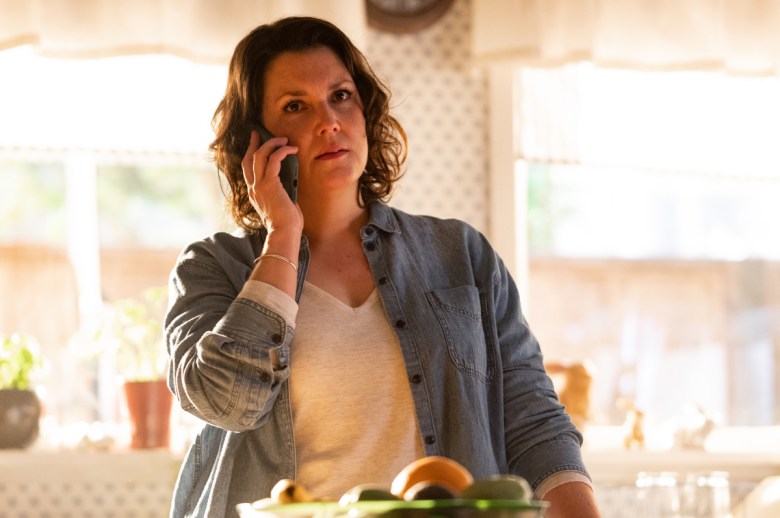 These disparate storylines all feel like elements pulled from individual Showtime series and after six episodes it’s still unclear how they all come together. Shauna’s attempt at reliving her youth sees her clashing with her own teenage daughter, though it brings up interesting discussions of how high school labels still travel with us. As Shauna says, she doesn’t even really like her daughter and it’s unknown whether it’s that her child reminds her of Jackie or that she’s living the life Shauna wishes she could have had. Natalie also retreats to the past, becoming consumed in the death of someone close to her. Misty appears to believe she’s moved on, but that’s only because she’s psychotic enough to believe it herself.

As far as the adult storyline goes, Lynskey may be the straight man to Cypress propelling a dark conspiracy, but the fun of “Yellowjackets” is in watching Ricci and Lewis tear up the scenery and each other. Whether it’s Lewis rocking a shotgun in her first reunion with Misty, or threatening to light a man’s penis on fire, she is a panther who stalks every scene. She brings a necessary grit that you’d expect from someone who spent 19 months in the wilderness, but an inner vulnerability. As we see in the moments with young Natalie (Sophie Thatcher), she’s experienced heavy amounts of trauma even before the plane crash and the cracks run deep. Ricci is equally wonderful to watch, giving a Patrick Bateman-level turn with a smile and deep-seated psychopathy that is terrifying.

But, overall, the storyline with the teenage girls actually enduring the wilderness is superior, and that might explain why it’s parceled out so deliberately to the audience. Thatcher, Nelisse, Purnell, Samantha Hanratty as young Misty, and Jasmin Savoy Brown as young Taissa are all fantastic, as well as the other girls associated. Where the individual adult actors are such defined personalities — and Ricci and Lewis are so grandiose in their performances — the teen girls have to illustrate not just their dynamics in an ensemble but their state of becoming. In the case of Shauna and Jackie, their relationship is so fraught with those unspoken power dynamics that exist between girls that much of the actresses’ power comes from the silent glances between them.

This is also the plotline where the true weirdness of “Yellowjackets” comes through. The group eventually finds shelter in an abandoned cabin, but with it comes the fear of an otherworldly threat. A mysterious symbol is found at various points, both past and present, in the girls’ lives and the paranoia of classmate Lottie (Courtney Eaton) leads one to believe there might have been a reason for the cannibalism. The entire thing is drawn out, so much so that people not gripped by the series could jump ship, and it’ll be interesting to see if the show sticks the landing or goes too far into “Lost” territory. That being said, the show doesn’t shy away from the blood and gore of being stranded in the woods. Director Karyn Kusama helmed the pilot and the subsequent directors — which includes Billie Woodruff and Daisy von Scherler Mayer — all have a fantastic ability to capture the visceral nightmare that is living in the wild without medical care, and especially antibiotics.

Right now, “Yellowjackets” is all kinds of fun, focused on a messy story and the messy people who rose from the ashes of it. With so many disparate threads being cast out, it’s still unknown whether everything will come to a satisfying conclusion. But, in the meantime, I’m ready to see more of what these girls dish up.