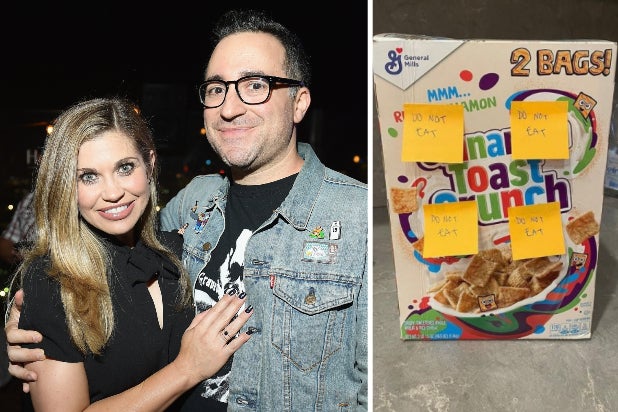 Days after going viral for apparently finding shrimp tails in his Cinnamon Toast Crunch, Jensen Karp is still trending Twitter. Why? Because the Internet has discovered that he’s married to a ’90 sitcom icon.

Some fans may recognize Karp by his stage name: Hot Karl. He began performing at 11 years old, and in his 20s signed a deal with Interscope Records for nearly a million dollars. In 2016, Karp released a book titled “Kanye West Owes Me $300” that details his rap career, recounting experiences with West, as well as pop icons Sisqó, and will.i.am. Ironically, Karp described the book to EW at the time as “a fish-out-of-water tale.” Fast forward to this week, and once again, fish puns — and literal sea creatures — surround Karp once more.

On Monday, Karp posted a picture of his cereal, expressing concern over finding what looked like shrimp tails in the bag. Karp tweeted “Ummmm @CTCSquares – why are there shrimp tails in my cereal? (This is not a bit).”

In response, Cinnamon Toast Crunch assured Karp that the objects in the bag weren’t actually shrimp tails, but cinnamon sugar that had accumulated “that sometimes can occur when ingredients aren’t thoroughly blended.”

From there, the saga only got weirder. Karp played into the humor of the situation, but was still genuinely concerned over what he had eaten. As a precautionary measure, Karp had his wife check the other bag of Cinnamon Toast Crunch they had (as part of a family pack).

While the findings in the bag were concerning, people seemed to be more blown away by the discovery of who Karp’s wife actually is: Danielle Fishel.

Best known for playing Topanga on “Boy Meets World” and its subsequent spin-off series “Girl Meets World,” Fishel married Karp in 2018, and the Internet seems to have had no idea that it happened. (For those who are curious, Fishel and Karp also have a son together, born in June 2019. His name is Adler).

Fishel herself has been relatively quiet on the situation, but hasn’t ignored it entirely. Shortly after Karp first posted about the situation, Fishel joked on Twitter that she would “usually wait for lunch to eat shrimp.”

And yet, the twists in the story continued from there. Karp went back through the bag, checking to see if he missed anything else. Upon his second search, he found a piece of string and some pieces of cereal with black marks baked in.

The general consensus on Twitter seemed to be that the black marks were baked-in rat droppings, leading Karp to call poison control.

On Tuesday, Karp posted an update saying that he felt fine, but was going to get the black pieces tested. He was sent to pest control, and has not posted an update on the findings. Karp did however post an update on the objects that kicked this saga off, revealing that a professional “crustacean researcher” is now working to definitively identify the pieces as shrimp tails.