1,000 Orthodox Jews crowd the streets of Jerusalem, breaking Israel lockdown rules, for funeral of Rabbi leader who died from Covid-19

Around 1,000 ultra-Orthodox Jews crowded the streets of Jerusalem on Thursday, breaking Israeli lockdown rules, for the funeral of a prominent Rabbi leader who died from Covid-19.

Coronavirus restrictions in Israel limit gatherings to 10 people indoors and 20 outdoors, and people must stay within their groups or ‘bubbles’.

During permitted gatherings – such as weddings and funerals – people are required to maintain a distance of two metres (six feet) much as they can, and wear face masks.

The funeral comes as Israel continues to battle the coronavirus outbreak, after relaxing a national lockdown in October. 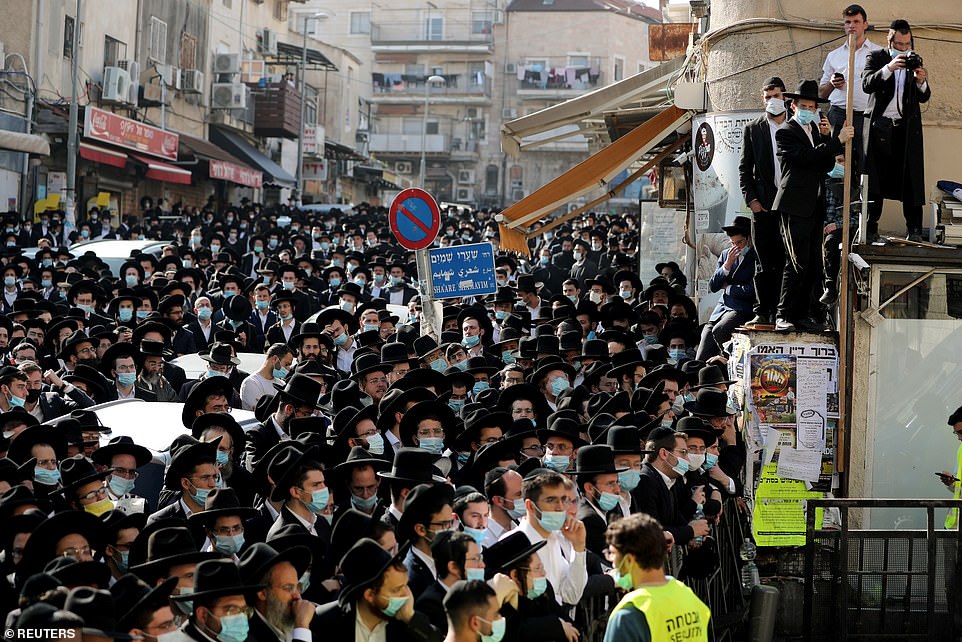 A large crowd of ultra-Orthodox Jews gathered in Jerusalem on Thursday (pictured) for the funeral of prominent Jerusalem Rabbi Aharon David Hadash, who died earlier in the day 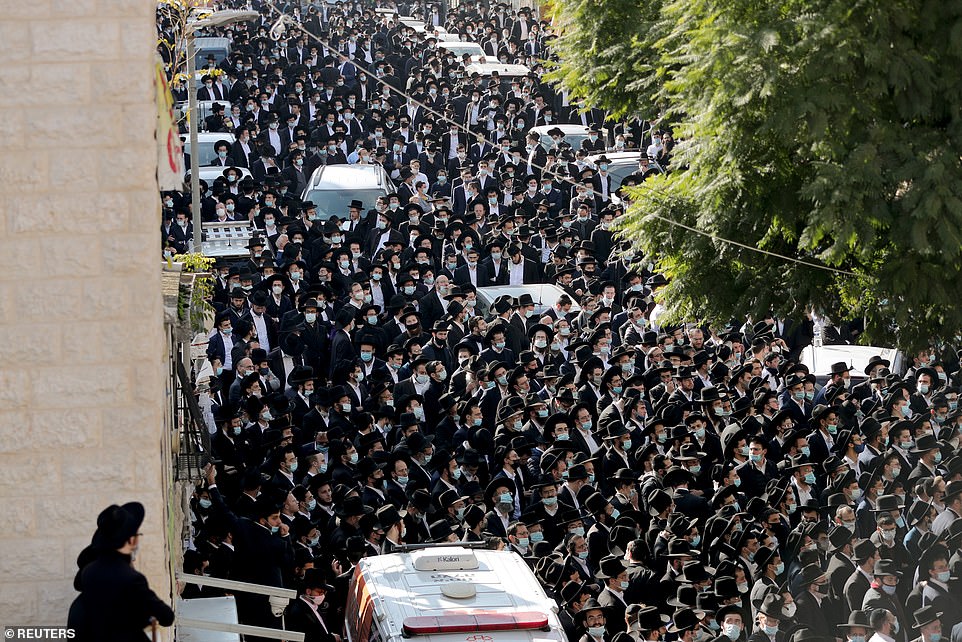 An estimated 1,000 people gathered in the streets outside Jerusalem’s Mir Yeshiva seminary building, despite the country’s restrictions on gatherings saying up to 10 people can gather indoors, or a maximum of 20 outdoors – due to the coronavirus pandemic 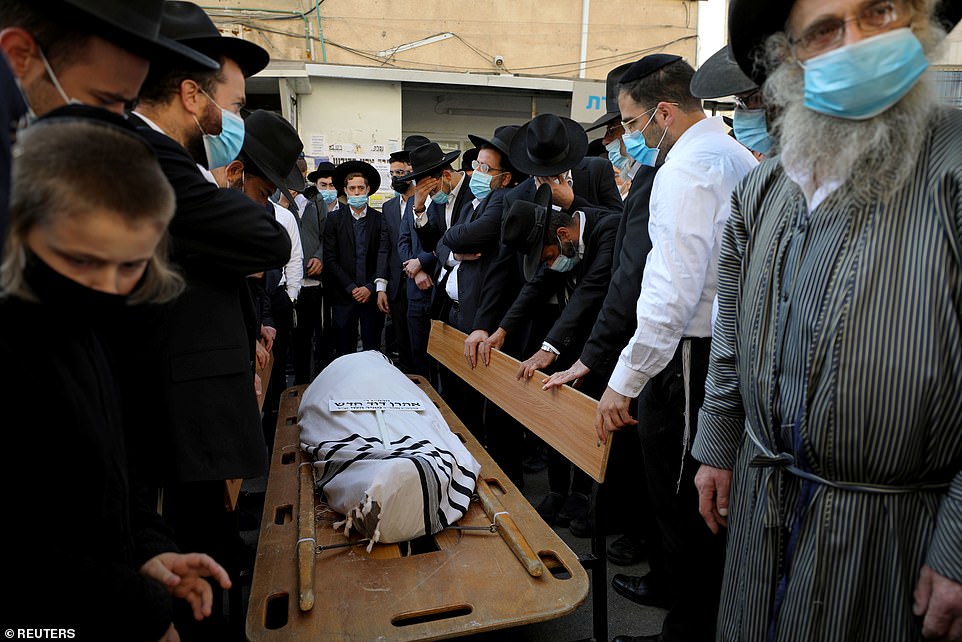 Rabbi Aharon David Hadash died earlier on Thursday morning, two months after he tested positive and was hospitalised for Covid-19. Pictured: Orthodox Jews gather around the body of the Rabbi on Tuesday outside the building

Pictures from the streets around where the funeral was held showed huge crowds of people wearing traditional Orthodox clothing in close proximity to one-another.

According to Israeli news channel Ynet, the majority in attendance of the funeral itself refused to wear masks, although pictures of the crowd showed many masked faces outside.

Israeli police were at the scene, encouraging people to maintain a distance and observe the country’s coronavirus rules, the channel reported.

The Mir Yeshiva organisation –  a Jewish educational institution – reportedly met with police officials on Thursday ahead of the funeral to make arrangements that would allow the community to mourn the rabbi while observing safety measures.

An agreement was made to close the Mir Yeshiva building and to only allow family members and the group’s leadership inside, and to divide roads using barricades.

But pictures suggested this did little to deter the large crowd from making its way to the building in Jerusalem on Thursday at around midday, with hundreds lining the streets, climbing on walls and standing on staircases to see the proceedings. 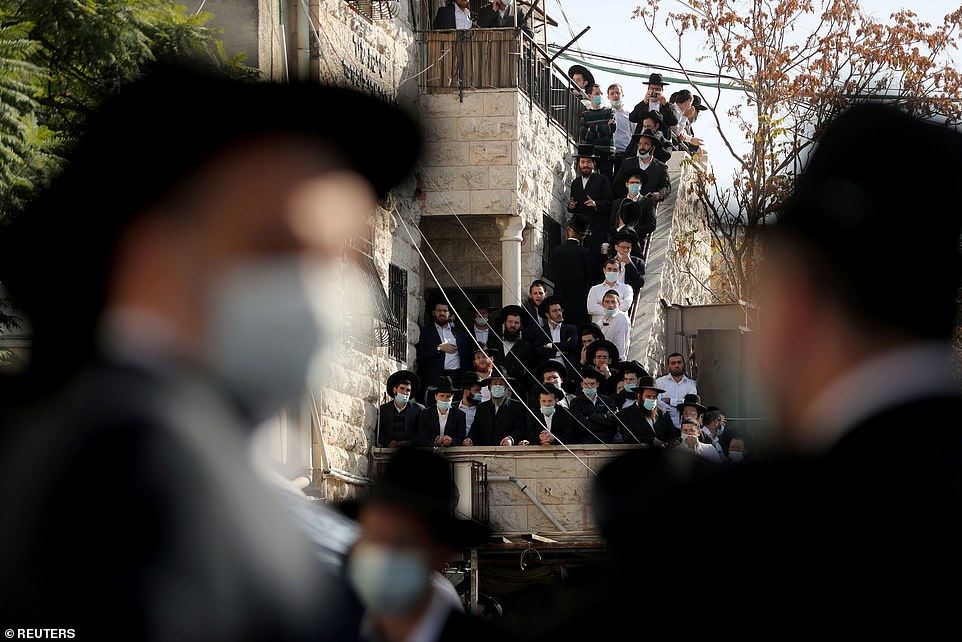 Pictures from the streets around where the funeral was being held showed huge crowds of people wearing traditional clothing in close proximity to one-another, with some climbing nearby staircases to get a better view of the procession 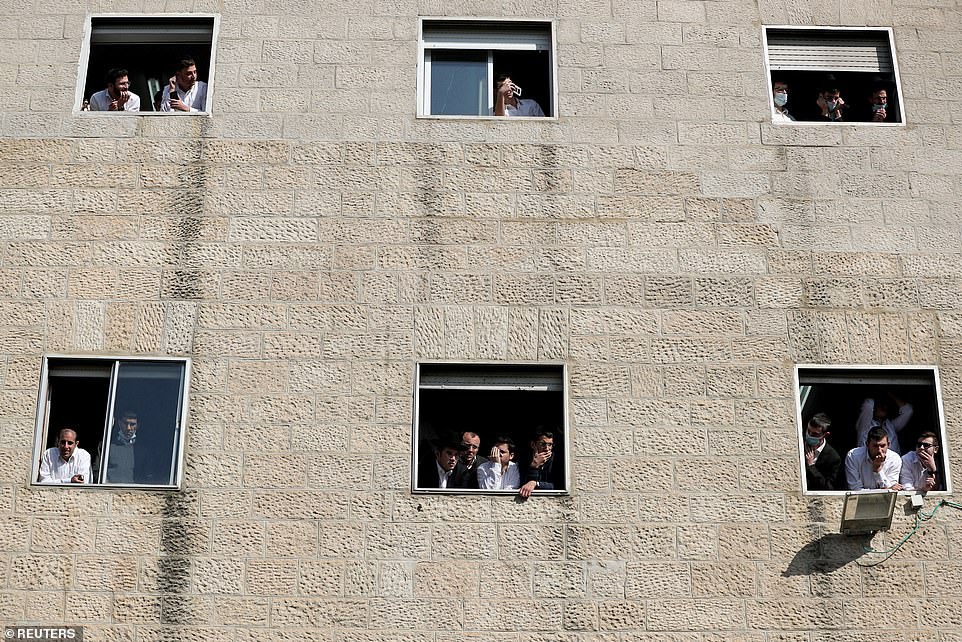 People attend a mass funeral for Rabbi Aharon David Hadash, the spiritual leader of Jerusalem’s Mir Yeshiva, one of the largest Jewish seminary in Israel (pictured)

Such violations of lockdown rules by segments of the ultra-Orthodox population have angered a broader Israeli public that is largely complying with the restrictions imposed to halt a raging coronavirus outbreak.

The ultra-Orthodox claim they are being unfairly targeted by the authorities. They point to large weekly protests, mainly by secular Israelis, against Netanyahu’s handling of the pandemic that have continued into the second wave. 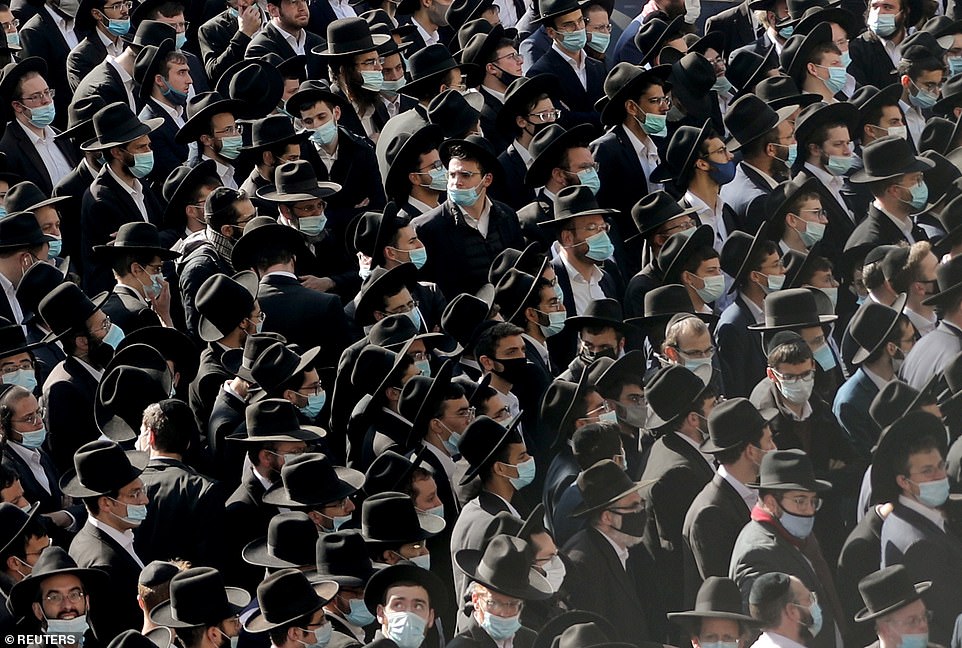 An agreement was made to close the Mir Yeshiva building and to only allow family members and the group’s leadership inside, and to divide roads using barricades – but this did not seem to deter the crowd from gathering outside (pictured) 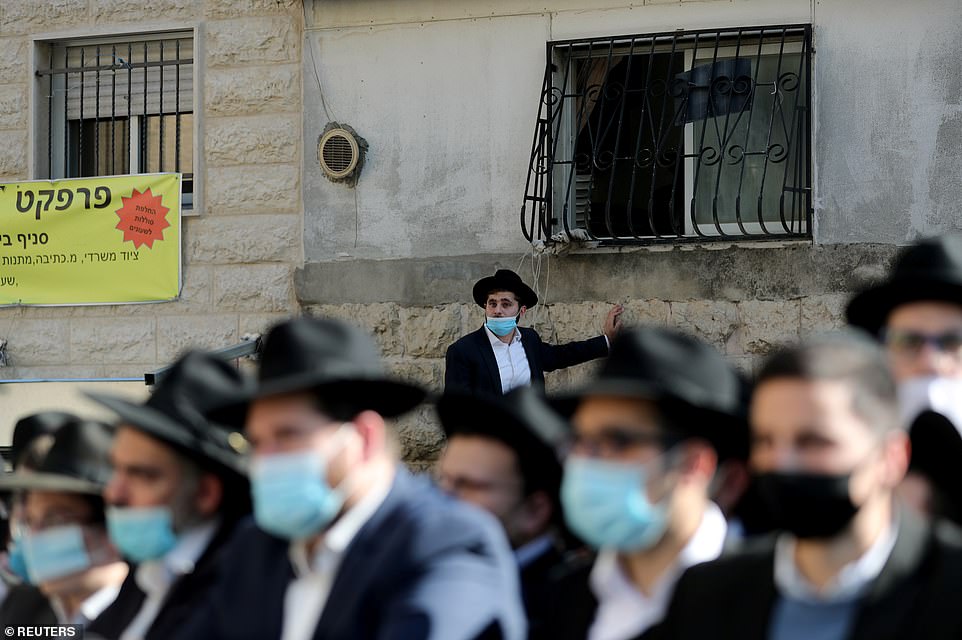 At the beginning of October, the government finally placed limits on the size of the protests, citing violations of public health guidelines.

A deep chasm has long divided religious and secular Israelis, wrought by years of seemingly preferential treatment for the ultra-Orthodox who are granted government stipends to study full-time.

Ultra-Orthodox support is the lifeblood of Netanyahu’s coalition and has helped secure his position as Israel’s longest-serving leader.

Israel imposed a second nationwide lockdown ahead of the Jewish New Year in September, aiming to keep people at home as new infections regularly reached over 5,000 per day. This lockdown was relaxed in October. 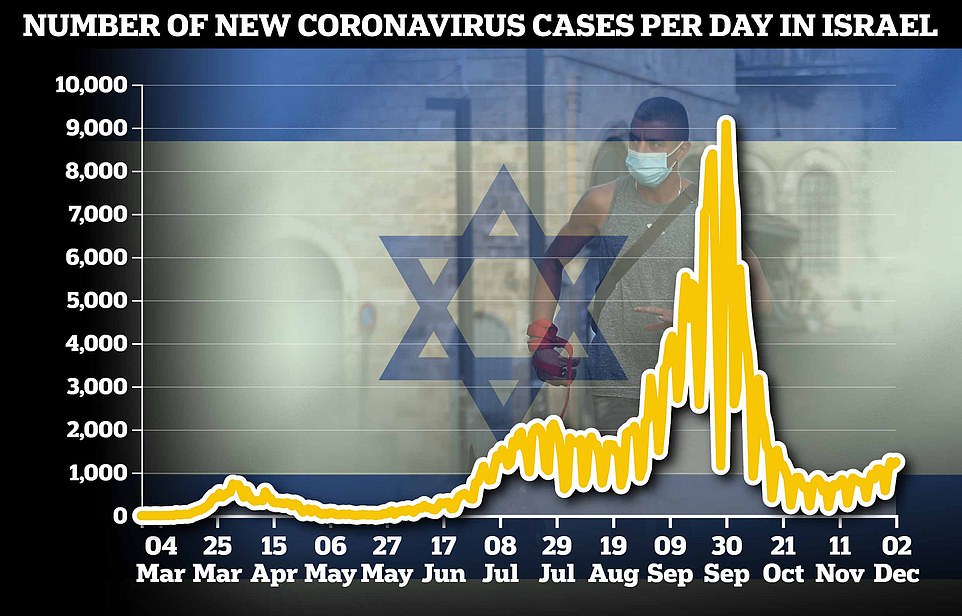 Israel saw a large spike in coronavirus cases over the high holiday period in September (pictured) which resulted in a national lockdown, that was relaxed in October. After getting the cases back down, they have begun to creep up once more – with the country reporting its first day of 1,500 new cases on December 3 for the first time since the lockdown 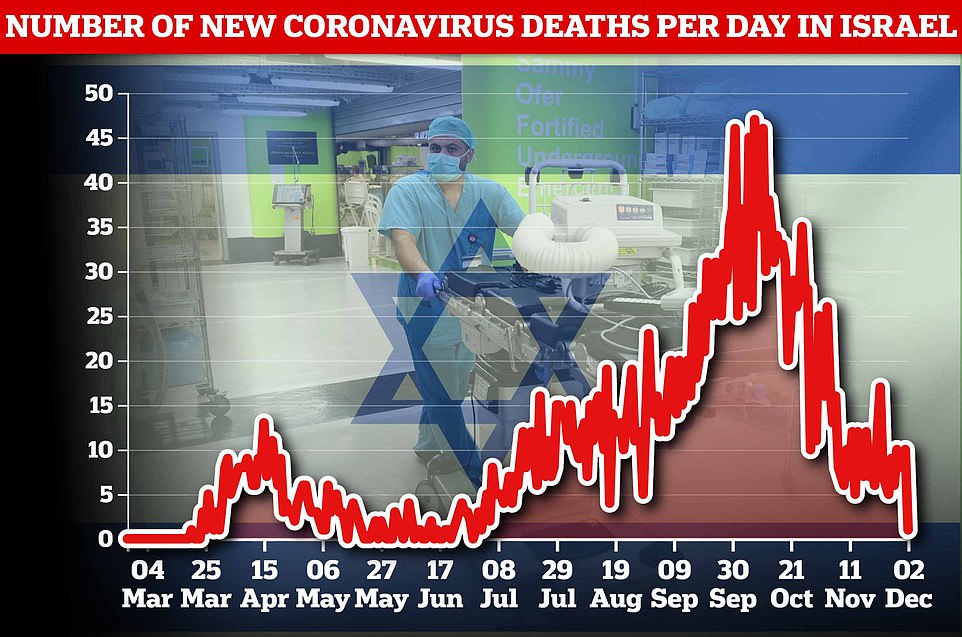 Since the beginning of the pandemic, 2,883 people have died from the disease. There are currently 267 in critical conditions

The funeral comes as Israel reported its daily new Covid-19 case count exceed 1,500 for the first time since it relaxed its national lockdown.

The country carried out 69,000 tests on Wednesday, suggesting a 2.2 percent positivity rate, indicating the ‘R’ rate – an indication of community spread – is now at 1.2 in the country.

Israeli media also reported that there are currently 539 people hospitalised with Covid-19, 267 of which are in a serious condition. Since the beginning of the pandemic, 2,883 people have died from the disease.

12/03/2020 World News Comments Off on 1,000 Orthodox Jews gather for funeral of Rabbi who died from Covid-19
Recent Posts
We and our partners use cookies on this site to improve our service, perform analytics, personalize advertising, measure advertising performance, and remember website preferences.Ok