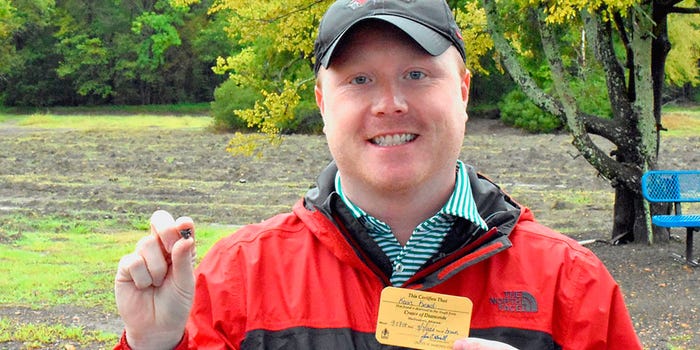 A 33-year-old Arkansas bank teller found the second-largest diamond at a state park earlier this month, according to the Associated Press.

According to a news release by Arkansas State Parks, Kevin Kinard found the 9.07-carat diamond at Crater of Diamonds State Park on September 7. The news release said that Kinard is a frequent visitor to the park and has been searching for diamonds since he was a child, but never came across one.

Kinard went to the park with friends prepared to wet sift — an easier method to discover a diamond in the dirt— but instead decided to look for gems on the surface, the news release said.

"I only wet sifted for about 10 minutes before I started walking up and down the plowed rows," Kinard said, according to the news release. "Anything that looked like a crystal, I picked it up and put it in my bag."

During his search in the southeast area of the park, Kinard found a "marble-sized crystal" with a "rounded, dimpled shape" that he thought "might've been glass" and placed it in his bag, according to the news release.

Following a long day at the park, Kinard and his friends arrived at the Diamond Discovery Center, where employees of the park assist visitors with the materials they found, the news release said.

"I almost didn't have them check my finds, because I didn't think I had found anything," Kinard said, according to the release. "My friend had hers checked, though, so I went ahead and had them check mine, too."

Kinard said he was in "complete shock" when park staff identified that his finding was the 9.07 diamond, which is the second-largest diamond found in the park since 1972. A superintendent of the park said that "conditions" were perfect for Kinard's findings.

"Park staff plowed the search area on August 20, just a few days before Tropical Storm Laura dropped more than two inches of rain in the park," assistant superintendent Dru Edmonds said in the news release. "The sun was out when Mr. Kinard visited, and he walked just the right path to notice the sunlight reflecting off his diamond."

Kinard registered the diamond as "Kinard Friendship Diamond," as an ode to his friends, according to the news release.

"We love to travel together and had such a great time out here," Kinard said. "It was a very humbling experience."

An Irish tourist in Rome defaced the Colosseum by carving his initials into the walls of the ancient structure, according to a report

Honey is one of the most faked foods in the world, and the US government isn't doing much to fix it