Singapore: China has opposed sanctions “or other coercive measures” to stop the bloodshed in Mynamar following a meeting of the United Nations Security Council but the south-east Asian nation’s closest ally said it hopes for peace and a “democratic transition” following two months of killing.

China’s ambassador to the UN, Zhang Jun, released a statement after Christine Schraner Burgener, the UN’s special envoy on Myanmar, implored the 15-member security council to consider action “to prevent a multi-dimensional catastrophe in the heart of Asia”.

The news followed the announcement of a one-month ceasefire by Myanmar’s military regime offered to the country’s ethnic armed organisations, after airstrikes in the borderlands forced villagers across the border to Thailand. It insisted, however, it would continue to clamp down on “actions that disrupt government security and administration”, giving itself licence for more violence and savagery against pro-democracy protesters. 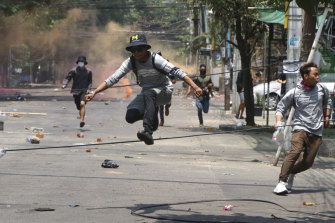 At least 536 victims including 43 children have been killed since the February 1 coup, according to the Assistance Association for Political Prisoners, which has been tracking deaths and detentions.

The escalation of brutality from the junta since the military’s Armed Forces Day last Saturday led an “appalled” Britain to convene an emergency session of the UN security council on Wednesday. Schraner Burgener, a Swiss diplomat, used the gathering to warn that a “bloodbath is imminent” in Myanmar and urged the council to “consider all available tools to take collective action and do what is right”.

A group of 45 former world leaders including former Australian Prime Minister Kevin Rudd had earlier in the week written to UN secretary-general Antonio Guterres calling for the security council to intervene and the Responsibility to Protect principle to be invoked in Myanmar.

However, arriving at a consensus in that arena was always going to be challenging with China and Russia, who sent its deputy defence minister to rub shoulders with junta leader Min Aung Hlaing at a troop parade in the capital Naypyitaw last weekend, having veto power as permanent council members.

The United States, which has sanctioned coup leaders and family members, blacklisted military conglomerates and suspended all trade with Mynamar, would intensify pressure on the junta, said its ambassador to the UN, Linda Thomas. It is not an approach China favours.

“One-sided pressure and calling for sanctions or other coercive measures will only aggravate tension and confrontation and further complicate the situation, which is by no means constructive,” China’s ambassador to the UN said.

“China hopes that Myanmar will restore peace, stability and constitutional order as early as possible and continue to steadily advance democratic transition.

“We hope that all parties in Myanmar can keep calm, exercise restraint, and take actions with a constructive attitude to de-escalate and cool down the situation. Lives and properties of the people of Myanmar and foreign nationals and businesses should be protected, and any attack on them is unacceptable.”

China last month voiced outrage at the burning of its factories in the Yangon, prompting the junta to impose martial law in the city.

Myanmar’s superpower neighbour maintained close relations with previous military rulers during the country’s decades in international isolation but also developed positive links with elected leader Aung San Suu Kyi in recent years. It has an interest in protecting its investment, principally the oil and gas pipelines that stretch from Kunming in Yunnan province to the Bay of Bengal, giving China access to the Indian Ocean.

“Should Myanmar slide into protracted turbulence, it will be a disaster for Myanmar and the region as a whole,” ambassador Zhang Jun said. 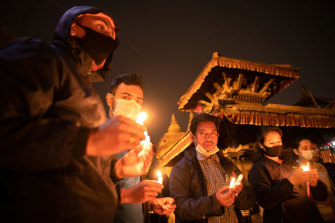 Candlelit vigils for Myanmar’s dead have been held across the country and internationally, including this one on March 31 in Kathmandu, Nepal. Credit:Getty

He added that China supported the holding of a special summit by the Association of South-East Asian Nations, of which Myanmar is one of 10 members, to try and find a diplomatic solution.

It is one that has far eluded ASEAN despite Indonesia leading an attempt to resolve the crisis via the regional forum.

In China, meanwhile, there is further concern about an outbreak of COVID-19 cases on its border with Myanmar, with the city of Ruili placed into lockdown after six positive tests on Wednesday, three of them Myanmar nationals, according to health officials. While hundreds have fled Myanmar into India and more than 2000 sought refuge in Thailand, the appearance of the virus has triggered China to tighten its border.

On Thursday, Suu Kyi was also due to return to court via video link on a series of charges brought by the junta including illegal possession of six walkie-talkies, breaching of coronavirus restrictions and incitement of public unrest.

She has been under house arrest since the coup was launched but on Wednesday was for the first time able to speak to and be seen by her lawyers, who said she told them she was healthy.