Mark Woodley really did not want to go to work on Thursday, and he wasn’t afraid to tell you.

Woodley, a sports anchor and reporter for KWWL, an NBC News affiliate in eastern Iowa, was pressed into service as the massive storm system moved across the plains. Temperatures plunged to minus 11 degrees in the morning and continued to drop, and it was snowing — heavily at times — as Woodley broadcast live from the streets of Waterloo for more than three hours. 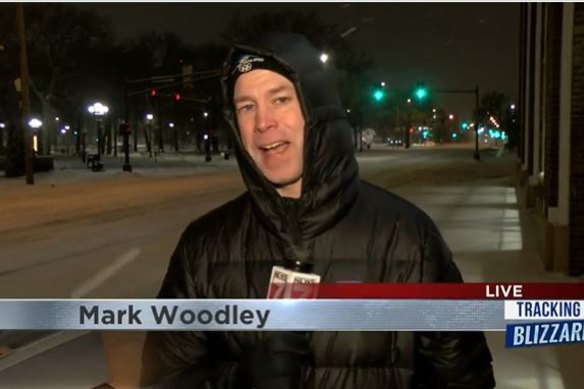 “What better time to ask the sports guy to come in about five hours earlier than he would normally wake up, go stand out in the wind and the snow and the cold and tell other people not to do the same?” Woodley told Ryan Witry, an anchor who was back in the warm, dry studio. “I didn’t realise that there was a 3:30 also in the morning until today.”

One grown man’s full-throated irritation was a gift to the internet that kept on giving.

As Witry continued to check in over the course of the morning, Woodley became increasingly annoyed.

“Tune into the show for the next couple hours to watch me get progressively crankier and crankier,” he said, before bemoaning missing an assignment that would have kept him inside a car.

“How do I get that Storm Chaser 7 duty?” he asked. “That thing is heated, the outdoors currently is not heated.”

As the minutes and hours passed, his efforts to enunciate became more strained.

And as the sun began to rise, Woodley wondered aloud if the joke was on him. 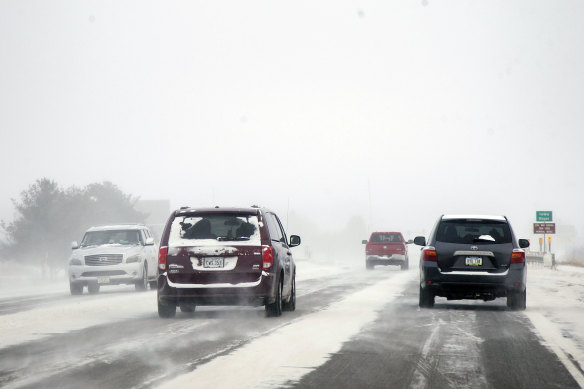 Blizzards resulting in power outages and cancelled flights are being experienced across the US.Credit:AP

“Can I go back to my regular job? I’m pretty sure, Ryan, you guys added an extra hour to the show just because somebody likes torturing me,” he said. “Compared to 2 1/2 hours ago it is just getting colder and colder.”

He signed off at daybreak — “thankfully for the last time this morning” — with large piles of snow behind him.

In an interview, Woodley, who has worked at KWWL on and off for 20 years, said that the previous 24 hours had “been insane” and that the response had been overwhelmingly positive, including from his employer.

“The whole thing was incredible, I don’t understand how celebrities do anything,” he said. “It’s exhausting. I love it because it’s something new for me but I never saw anything like this coming.”

Woodley said he did 14 live stand-ups over the course of 3 1/2 hours but selected the funniest parts to splice together “like a trailer for a terrible comedy” and post on social media. He originally posted the montage to his personal Facebook page, but his friends and family encouraged him to put it on Twitter. The next thing he knew, director Judd Apatow and actor Josh Gad were retweeting him.

While Woodley was a little worried that he’d get in trouble with his bosses at the station, he said “they know who I am on air,” and adding a little snark and sarcasm was not out of character. The station has been “completely onboard,” he said.

Woodley managed to talk his way out of doing a second round of coverage on Friday morning and instead planned to return to his regular 6 pm time slot to preview the Music City Bowl in which the University of Iowa will play the University of Kentucky in Nashville, Tennessee, next weekend.

“I was excited to not be that guy again, and if the good Lord is willing I will never do it again,” he said. However, if his team is short-handed, as was the case this week, he said he would grudgingly step in.

As a local reporter, Woodley said he imagined making it “big” someday.

“Being known for being the crotchety old sports and weather guy was not on the list,” he said, “but it is what it is.”

This article originally appeared in The New York Times.

12/24/2022 World News Comments Off on A US sports reporter was sent to cover the weather. He did not like it.
Recent Posts