The results of the 2020 election should force us all to admit that we underestimated Joe Biden.

Not only were his chances of winning underestimated but the manner of his victory. His greatest weakness became his electorial strengths in the COVID election of 2020. 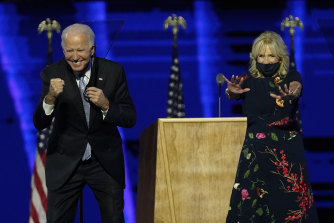 The former vice-president’s campaign was essentially left for dead at the beginning of the year, when the aged candidate had scant funding and little to distinguish himself from the pack of other Democrats running for the nomination.

At 77, he was deemed too old, too white and too male. His meandering style of speech caused concern, not to mention his word choice ("malarky"), all seemed to hark back to another era of politics. Not just to the Obama era-but to the 1980s when Biden first ran for president.

At the Democrat debates, on the stage with the likes of Pete Buttigieg and Andrew Yang, Kamala Harris and Cory Booker, Biden appeared unprepared for the Trump-era.

When Biden came in 4th place in the all-important Iowa caucus in February, his campaign was nearly broke.

Then came Super Tuesday in March when Biden upended expectations and pulled off a huge upset: zooming ahead of socialist rival Bernie Sanders, by drawing in support from a spectrum of voters –black and white, women and men – who he would need to defeat Trump.

Even then, however, pundits failed to fully recognise Biden’s viability.

Perhaps these expectations remained while Biden kept a low profile. With the pandemic, most in-person campaigning was halted which forced Biden from the public’s eye.

But again, images are deceptive. Not only was he observing social distancing during the pandemic, Biden was also following the oldest rule in politics: “Never interfere with the enemy when he is in the process of destroying himself.” 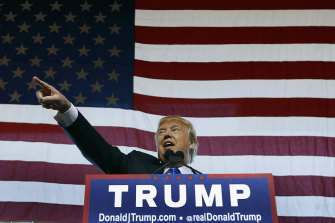 ”I’m the only thing standing between the American Dream and total anarchy, madness, and chaos,” Donald Trump said in a speech on Friday.Credit:Getty

Trump’s chaotic, response to the pandemic was one the biggest negative ads in the campaign:starring the President himself.

Voters need only be aware of the victims in their own community and to keep checking the Johns Hopkins Coronavirus tracker to see how badly Trump was doing in combating COVID-19. The death toll moved from handfuls of fatalities in March to about 158,000 dead during the Democratic National Convention in August.

With half the US on lockdown, Biden even raised prodigious amounts of money, amassing $US1billion in combined funding, just as Trump blew through $US1.4 billion over the course of the year, when many people were stuck at home.

Not only had the pandemic rocked US society, the fallout of protests after the death of George Floyd in Minneapolis began to shape the political agenda. Biden said he entered the race because he saw "a battle for the soul of America" after the white nationalist rallies of 2017.

Suddenly, many of the fatherly, even grandfatherly, traits of Biden didn't look so bad. He spoke reassuringly about the US, he urged communities to get along and look past differences, he said trust the science on coronavirus, wear a mask, build coalition, and "keep the faith."

When Biden spoke at length before the US, during the Democratic National Convention in August, he spent a lot of time discussing his own personal struggles, including with stuttering.

There, plain for the world to see, was the explanation of Biden’s halting, sometimes disconnected speech: a struggle with stuttering. Biden's all-too human struggles assumed a totemic quality for a nation struggling with coronavirus, inequality – both racial and economic – and division and uncertainty.

At one point, the attention of the virtual Democratic National Convention shifted to Brayden Harrington, a 13-year-old with the stutter who credited Biden with helping him.

Few who watched Harrington patiently communicate despite his stutter were unmoved, including Republicans, who recognised the universality of personal struggle and the human will to overcome it.

Biden’s embrace of the stuttering story during the prime time convention was a political judo move that may be studied for decades to come.

In single moment, Biden used the convention to refute specious claims about his mental acuity while recasting the terms of politics from Trumpian combat to compassion.

Biden was also frank and fatherly about the loss of his son Beau in 2015 to cancer, after the earlier loss of his wife and daughter in 1972 when he was just elected to the Senate.

Biden’s ability to convert tragedy into traction with voters – in the course of three days in August, no less — recalled how FDR used his confinement in a wheelchair to understand the suffering of the poor and marginalised.

After the convention, it seemed that to support Biden, to connect to him, meant to participate in a human story.

Contrast this to the sort of conspiracist, digital warfare the Trump campaign is associated with.

Biden personalisation of the political reset the tone and stood in contrast to the four years of Trumpian division and conspiracy theory.

Biden, as a former VP, and lifelong creature of Washington, was, in the language of 2016, part of the “rigged” system.

So Biden and his campaign, created a new language for the 2020 campaign. Decency. Hope. “Keep the faith,” he has repeated.

Somehow, Biden employed what appeared to be old-fashioned human politics to defeat every accusation and conspiracy theory lobbed at him over the internet.

Despite our own disbelief, Biden’s won an election that less than a year ago no one believed he would be in the running.

How is this possible? Maybe too many of us had written him off too soon.

11/10/2020 World News Comments Off on Admit it, we underestimated Joe Biden
Recent Posts
We and our partners use cookies on this site to improve our service, perform analytics, personalize advertising, measure advertising performance, and remember website preferences.Ok