The South Carolina Supreme Court has suspended the law license of Alex Murdaugh’s best friend, Corey Fleming, amid allegations Fleming was involved in a scheme to embezzle millions obtained in wrongful death settlements from the sons of Murdaugh’s longtime housekeeper, Gloria Satterfield.

South Carolina Chief Justice Donald W. Beatty on Friday issued the temporary suspension of Fleming’s law license “until further order of this Court.” The order cited a rule allowing the interim suspension of lawyers over misconduct allegations “upon receipt of sufficient evidence demonstrating that a lawyer poses a substantial threat of serious harm to the public or to the administration of justice.”

Beatty did not elaborate further on the specific reasoning for Fleming’s suspension, which came eight days after Fleming, his Beaufort-based law firm, Moss, Kuhn and Fleming, and their malpractice insurance carrier reached a settlement with the Estate of Gloria Satterfield on Oct. 1.

Fleming admitted to “material mistakes” in the handling of insurance settlements negotiated following Satterfield’s 2018 death weeks after an alleged trip and fall at Murdaugh’s home in Colleton County, but “maintains he was not a willing participant in Mr. Murdaugh’s scheme but was used,” according to a joint statement from Fleming’s lawyers, Thomas Pendarvis and David Overstreet, and attorneys for Satterfield’s estate, Eric Bland and Ronald Richter, provided to Fox News Digital Thursday. Fleming also agreed to pay back legal fees. 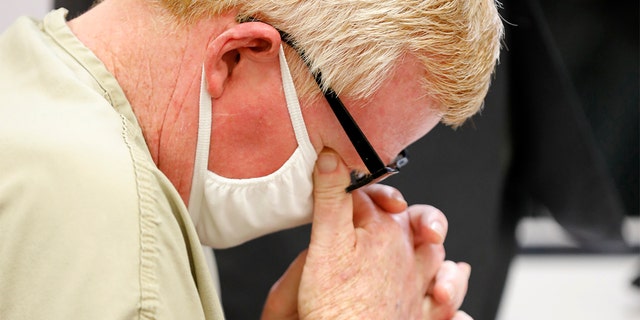 Alex Murdaugh weeps during his bond hearing, Thursday, Sept. 16, 2021, in Varnville, S.C. Murdaugh surrendered Thursday to face insurance fraud and other charges after state police said he arranged to have himself shot in the head so that his son would get a $10 million life insurance payout. (AP Photo/Mic Smith)
(AP Photo/Mic Smith)

Satterfield, a 57-year-old housekeeper and nanny for the Murdaugh family for over two decades, supposedly tripped over dogs and down steps at the Murdaugh’s home in Colleton County on Feb. 1, 2018. Sustaining a head injury, she died at the hospital weeks later on Feb. 26, 2018, without ever regaining consciousness. After her funeral, Alex Murdaugh told Satterfield’s sons that he was responsible for their mother’s death and introduced them to an attorney, Fleming, to handle a wrongful death suit against him. But her sons were never informed of a possible conflict of interest, as Fleming was also Alex Murdaugh’s former college roommate and godfather to Paul Murdaugh.

Fleming convinced one of the housekeeper’s sons, Tony Satterfield, to sign representation of his mother’s estate over to Chad Westendorf, vice president of Palmetto State Bank, citing potential “business issues” that might arise. During a Dec. 19, 2018, court hearing with Westendorf, Judge Carmen Mullen approved a partial settlement of $505,000. Fleming then began dispersing that money weeks later on Jan. 7, 2019, sending a check in the amount of $403,500 to a payee named Forge, according to Tuesday’s filing.

“This check was not sent to Forge Consulting in Atlanta, Georgia. Rather upon Murdaugh’s directive was sent by Fleming to a P.O. Box address given him by Murdaugh,” the filing says.

Fleming continued to pursue additional insurance policies, and through a mediation in March 2019 was able to secure an additional settlement in the amount of $3.8 million. The total settlement amounted to about $4.3 million. Mullen later signed off on an order that said about $2.8 million of that money was entitled to the beneficiaries of the estate, and that Westendorf, as the representative or the estate, was to later pay that amount to Satterfield’s sons. But the sons were never made aware of any hearing or settlements in their mother’s death and were never given a dime.

The order also was never properly filed into public record as required under South Carolina law.

Separately, Fleming was named in a different lawsuit filed last month on behalf of Connor Cook, one of the passengers injured in the February 2019 boat crash that also killed 19-year-old Mallory Beach.

A drunken and underage Paul Murdaugh allegedly steered the boat into a bridge in Beaufort County, but the lawsuit claims that Alex Murdaugh started a “whisper campaign” to spread the false rumor that Connor, and not his son, Paul, was driving. Cook also claims Alex Murdaugh sought him out at the hospital after the crash to tell him to “keep his mouth shut” and later introduced Cook to Fleming, who as his attorney, directed the teen not to talk to law enforcement investigating the accident.

Boating under the influence charges were dropped against Paul Murdaugh after his death in June when he and his mother, Maggie Murdaugh, were found shot on the family’s property in Colleton County. No arrests have been made in connection to their double murder.

Meanwhile, Alex Murdaugh was released from jail and allowed to travel back to an out-of-state rehabilitation facility without GPS monitoring last month to treat a supposed opioid addiction. He had confessed to South Carolina’s State Law Enforcement Division (SLED) to hiring his former legal client and alleged longtime drug dealer, Curtis Eddie Smith, to shoot him so his surviving son, Buster Murdaugh, could collect a $10 million life insurance policy.

Alex Murdaugh claims he provided Smith with a gun and the two went to a rural Hampton County road on Sept. 4. But Smith allegedly missing, only grazing Murdaugh in the head. The incident happened days after the Hampton-based law firm, PMPED, acted for Murdaugh’s resignation, alleging he misappropriated millions from the practice founded by his great-grandfather. PMPED filed a lawsuit of its own against Alex Murdaugh last week.