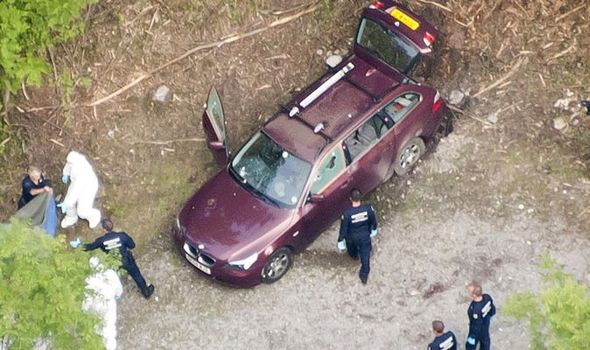 The man was arrested following a “cold case review” into the mystery deaths of the four victims in 2012. According to some reports he was interviewed as a witness before but has now been detained over alleged “inconsistencies” in his statement.

The murdered relatives ‑ engineer Saad al-Hilli, 50, his dentist wife, Iqbal, 47, and her mother Suhaila al-Allaf, 74 ‑ were shot dead in their car while they were on holiday near Chevaline in eastern France.

Despite being shot and pistol-whipped, the couple’s seven-year-old daughter Zainab survived.

Her sister Zeena, four, escaped injury by hiding in the footwell of the family’s BMW.

Yesterday’s dramatic development is the latest in a series of arrests. But police still have no clear idea why any of the victims were targeted.

Detectives have picked apart the lives of Iranian-born Mr al-Hilli and his wife, who lived with their daughters in Claygate, Surrey.

By extraordinary coincidence, Mrs al-Hilli’s American former husband, Jim Thompson, died of a heart attack in the US on the day of the murders. But police ruled out any link.

Inquiries into Mr Mollier found no connection with the British family and it is believed he was simply in the wrong place at the wrong time.

In a statement yesterday, French prosecutor Line Bonnet-Mathis confirmed: “A person was taken into custody on January 12, 2022 at 8.05am by investigators from Chambery in connection with the assassination of the al-Hilli family and Sylvain Mollier.”

The man being quizzed is said to be “living in a couple” in the Lyon area, around 100 miles from the scene of the murders. Officers were searching his home and nearby properties.

In April 2013, former soldier Patrice Menegaldo took his own life after he was interviewed as a witness.

He had left a suicide note saying the interrogation made him feel “like a suspect”, but French authorities insisted the session, which lasted about two hours, had been “routine”.

Ms Bonnet-Mathis said yesterday: “There have been a lot of arrests in this case, so we mustn’t get carried away. I won’t be saying any more until the suspect has been heard.

“We have already had a suicide…in this case so must remain cautious and measured about its outcome.”

She added: “I don’t want to give anything away that identifies this person or where he comes from.”

A source said police are examining the alleged “inconsistencies in the suspect’s original testimony and checking out his alibi.”

The suspect’s lawyer, Jean-Christophe Basson-Larbi, said the man had “already been heard in this case” so must “benefit from the right to respect for his private life, and from the presumption of innocence”.

Other arrests in the case include that of Mr al-Hilli’s brother, Zaid, who was questioned in 2013 and later told he would face no further action.

Police also ruled out convicted killer Nordahl Lelandais, who was quizzed while he was being investigated over two unrelated murders.

An Iraqi prisoner, known only as Mr S, was questioned after allegedly claiming he was paid to shoot the al-Hillis. And a former police officer was arrested because he owned a gun similar to the murder weapon.

They too were ruled out. As was a motorcyclist seen in the area at the time. Police only tracked him down in 2015 ‑ but then confirmed he was on a paragliding trip.

The Alps murders have prompted a range of theories about the motive, including Mr al-Hilli’s past life in Iraq and Mr Mollier’s job as a welder in the nuclear industry.

Police have also considered the possibility the victims were killed by a “lone wolf” psychopath. But none of the theories has stuck.

01/13/2022 World News Comments Off on Alps murders: Man arrested over mystery deaths of British family and cyclist in 2012
Recent Posts