Washington: Just when you’re feeling proud of America, she finds a way to break your heart.

At the end of June, it looked like the US was about to pass a remarkable milestone in its fight against the coronavirus.

After plummeting for months, the seven-day average of new cases appeared poised to drop below 10,000 for the first time since March 2020.

That day never came. Instead, cases began rising and have been going up ever since. 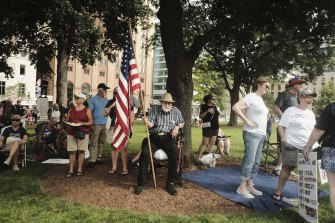 A demonstrator holds an American flag during a protest against Covid-19 vaccination mandates in Lansing, Michigan, on Friday, August 6, 2021. Credit:Bloomberg

Daily new cases are now back to 118,000 a day – the highest since February when only a small proportion of the country was vaccinated against the virus.

Other countries like the United Kingdom and Israel have experienced big increases in cases in recent months. But, thanks to their high vaccination rates, the surges did not lead to a big increase in deaths.

It’s a different story in the US. After falling as low as 180 in early July, the average number of daily deaths is back over 600 and climbing rapidly.

On Tuesday, local time, the US recorded 1049 COVID-19 deaths, the highest since March.

The reason is simple, tragic, and entirely preventable. Not enough Americans have been willing to get vaccinated, despite having access to an abundance of free and stunningly effective vaccines.

Media outlets across the country are full of stories of Americans fighting for their lives in hospital and expressing regret at not getting vaccinated when they had the chance.

“I messed up big time, guys,” Virginia father Travis Campbell said through an oxygen mask in a video posted to Facebook last week. “I didn’t get the vaccine…I made a mistake, I admit it.”

Compare the US to Canada, which has no vaccine manufacturing capacity and had to beg to gain access to America’s stockpile of unused AstraZeneca vaccines.

At the end of May, just 6 per cent of Canadians had been fully vaccinated against COVID-19 compared to 41 per cent of Americans.

Just two months later, Canada had overtaken its neighbour: 63 per cent of Canadians are now fully vaccinated compared to 51 per cent of Americans.

Americans have been offered all manner of incentives to get vaccinated from free beer to donuts and even guns.

Yet 30 per cent of the adult population has declined to get vaccinated – a far higher level of resistance than comparable countries such as Canada, the UK and, based on current trends, Australia.

Communities with large numbers of white conservatives and African Americans stand out for their low vaccination rates.

Loopy conspiracies that the vaccines contain microchips or make you infertile get a lot of attention when explaining vaccine refusal.

But something else was at play in late June when The Sydney Morning Herald and The Age visited Mississippi, the state with the lowest vaccination rate in the nation.

Some of the hold-outs were ideologically opposed conservatives; others were lazy, apathetic or worried about potential side effects. What they all had in common was that they perceived getting vaccinated as an entirely personal decision about what they put into their bodies.

There was no sense that they had a role to play in a shared, nationwide effort to prevent the spread of the virus and prevent people from dying.

The dark side of American individualism and liberty is selfishness and a lack of empathy.

As a result, vaccinated Americans are feeling increasingly angry at their fellow citizens for refusing to get the jab. The sense of bliss and relief of just a few months ago is quickly giving way to fear and frustration.

New Orleans had to cancel its beloved jazz festival for a second year in a row. Residents in Washington DC and Los Angeles have to wear masks while exercising at the gym, even if they’re fully vaccinated.

Especially alarmed are the parents of young children who are about to return to school but are not yet eligible to be vaccinated.

The Republican governors of Florida and Texas – two states with the highest COVID rates in the nation – are heightening parents’ anxiety by trying to block local school districts from requiring students to wear masks while in the classroom. 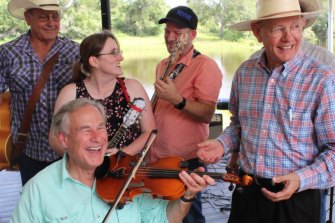 Appealing to the Republican base by prosecuting a culture war on masks is more important to them than limiting the spread of a deadly virus.

The Biden administration is not blameless either.

It’s baffling that Biden has not yet appointed someone to run the Food and Drug Administration, the federal agency responsible for approving vaccines and medications.

Perhaps a strong leader would have found a way to speed up the tortuously slow process for the vaccines to be granted full approval, rather than their current “emergency use authorisation”. This designation has led some to mistakenly view the vaccines as experimental and risky.

And while the administration did a good job at getting jabs into the arms of the willing, it has been far less successful at converting the doubters.

The White House could have played a useful role by creating a national app that allows people to demonstrate their vaccination status, but was likely spooked by conservative opposition to any form of “vaccine passport”.

There has been some recent good news. The average pace of new vaccinations this week topped 500,000 people a day for first time since June, according to the Centres for Disease Control and Prevention.

Part of the reason for the uptick may be compulsion. With many Americans refusing to do the right thing of their own accord, US businesses and government agencies are increasingly compelling them to get the jab.

On Thursday (AEST) California Governor Gavin Newsom announced that all teachers in his state will have to provide proof of vaccination or submit to regular testing. Amtrak, the national passenger train service, announced the same policy for its employees.

Even more importantly, the surge of COVID cases and deaths appears to be convincing some hold-outs to get vaccinated as they realise their decision could literally be a matter of life and death.

Hopefully the number of vaccinations continues to rise, and the case numbers eventually drop. But it didn’t have to be this hard, or this deadly.

08/12/2021 World News Comments Off on America had a chance to crush COVID, but blew it
Recent Posts