An American hoops star has lashed out at Basketball Australia for ‘clear racial discrimination’ after she was threatened with a ban over her braided hair.

Melbourne Boomers’ US import Tiffany Mitchell, 27, was told she’d never play in the WNBA until she put her long braids into a bun to stop them flicking into rivals’ faces.

But the rule Basketball Australia cited has been axed by the sport’s international body – and should have gotten the chop in Australia too.

Team-mates took the knee in protest against the ‘racist’ veto before their game on Saturday after Basketball Australia admitted the mistake and scrapped the edict. 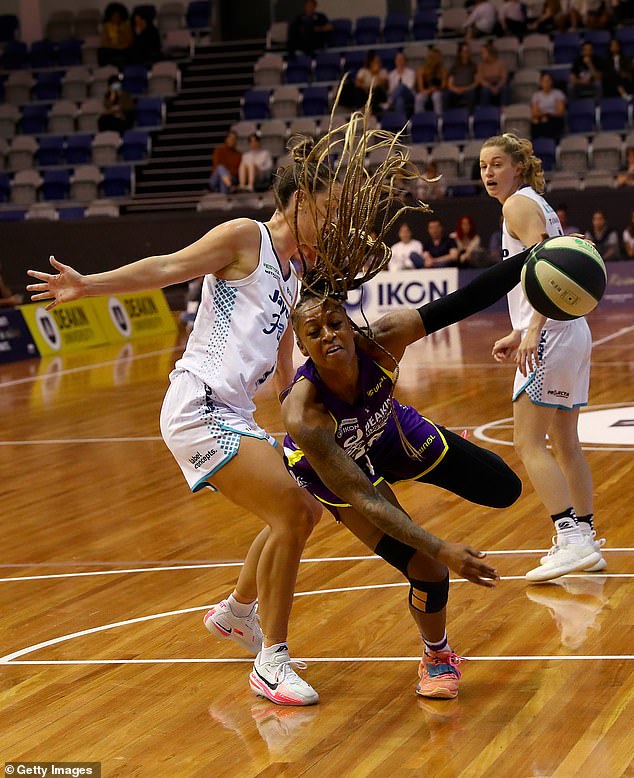 ‘This post will be uncomfortable for some to read and inspiring for others to read,’ said Mitchell on Instagram. ‘Throughout my first month here in Australia I had little to none problems.

‘Until this past week I was met with a situation that was clear racial discrimination.

‘I’ve played all around the world, in every top league at the highest level and my braids has never been an issue.

‘I was approached about my hair, and [told] that for the start of the regular season, I wouldn’t be able to play if I didn’t tie my hair up or wear it in a bun.

‘It’s clear only the black people in this league has these type of braids.’

She said the ruling had affected her in their WNBL match against Southside Flyers on Saturday, despite winning 91-74, with Mitchell already the team’s top scorer.

‘You can clearly see the pain I was still carrying – how are you enforcing a rule that isn’t even a rule any more?’ Mitchell, who joined the Boomers from Indiana Fever in the WNBA in the US, said online.

‘The target I felt I had on my back was indescribable but I still played with all the disappointment I felt from Basketball Australia.’

She added: ‘When I approached Basketball Australia with the discomfort it caused me, they stood on the fact that it was a FIBA rule they were told to enforce. 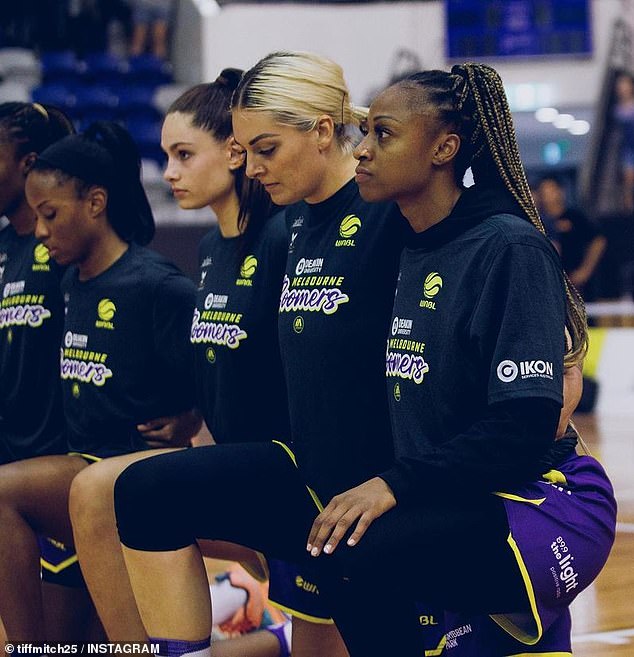 Team-mates took the knee in protest against the ‘racist’ veto before their game on Saturday (pictured)  after Basketball Australia admitted the mistake and scrapped the edict. 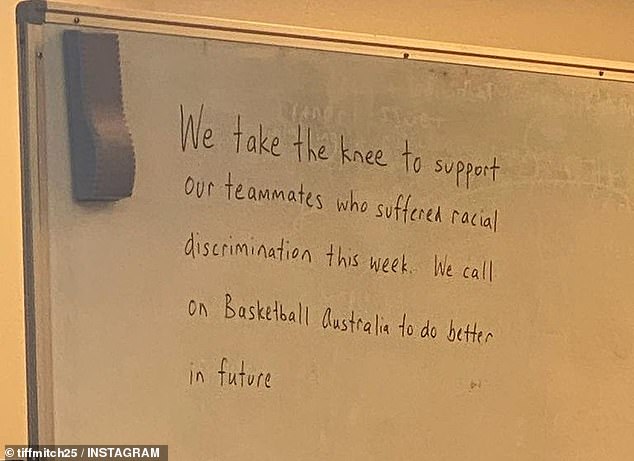 Tiffany Mitchell said she was grateful for the support she’d received from team-mates and Melbourne Boomers club officials (pictured, the whiteboard in the changing rooms)

‘But later they reverted because it was actually a rule in FIBA that wasn’t even in place any more…how are you enforcing a rule that isn’t even a rule anymore?’

‘I am completely thankful for my club as they stood behind my teammate and myself that had braids and they were very supportive. We took a Knee during the anthem before the game.

‘Did this change how I still felt inside about the entire situation? No, but it gave me a sense of comfort knowing that the ladies that I suit up with every night had my teammate and I backs.

‘Goes to show we have a long way to go for equality all over the world.’ 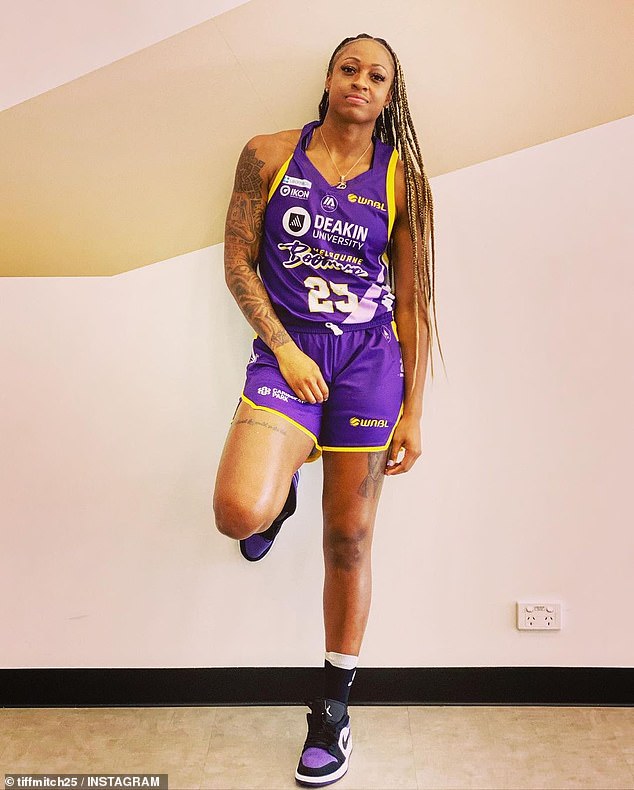 Tiffany Mitchell (pictured) said the ruling had affected her in their WNBL match against Southside Flyers on Saturday, despite winning 91-74 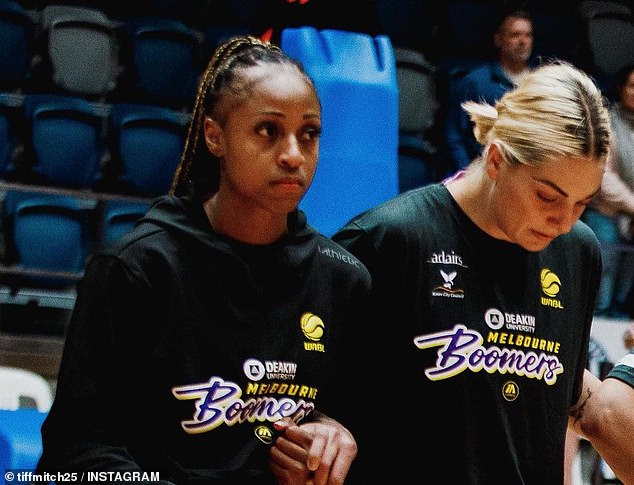 Tiffany Mitchell (pictured) is already the club’s top scorer but said in this picture which she posted on Instagram: ‘You can clearly see the pain I was still carrying’

She added: ‘Unfortunate for these conversations to happen but happy Basketball Australia is held accountable and become aware of the ignorance displayed.’

Basketball Australia has now admitted it was wrong.

‘Basketball Australia makes an unreserved apology for any anguish and pain that was caused by this rule,’ it said in a statement.

‘The policy has been deemed discriminatory and inconsistent with Basketball Australia’s Diversity and Inclusion framework by the WNBL Commission.

‘It is also not enforced in either the WNBL, other leading professional women’s leagues around the world or international competitions such as the Olympics and World Cup.

‘To this end, the WNBL Commission has removed the policy, effective immediately.’ 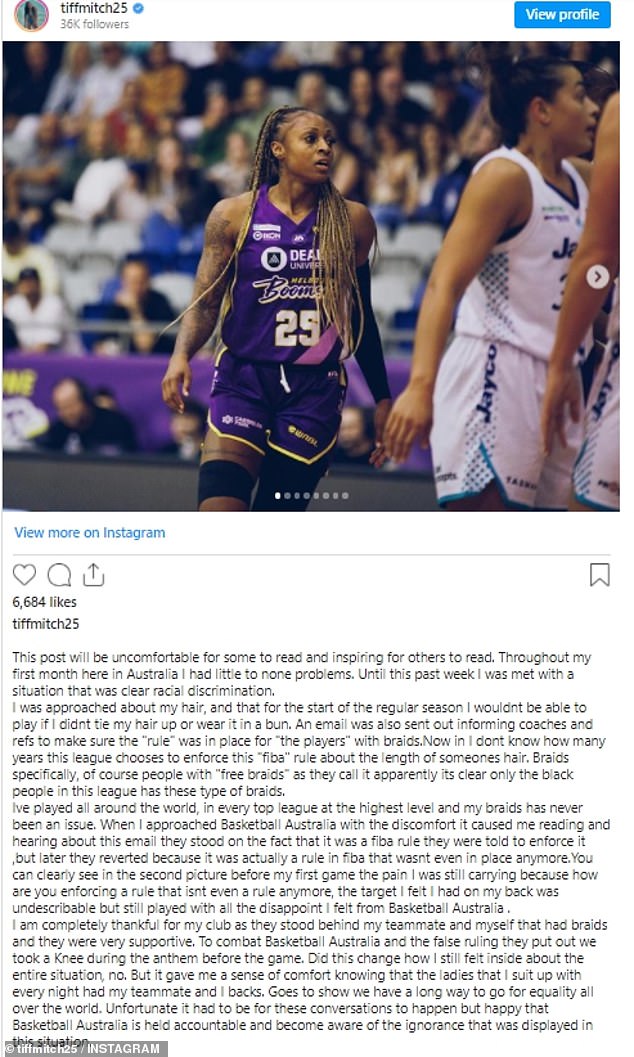