Second World War veterans from the US have returned to the Normandy D-Day beaches 75 years on to pay tribute to their fallen comrades who sacrificed their lives.

Gathering on Omaha Beach in France, the former-soldiers saluted the friends who died during the landings and war that stretched from 1939 to 1945.

Americans traveled thousands of miles to arrive today June 6 in time for the commemorations, as part of their promise to ‘never forget’ those who lost their lives.

Male and female veterans, many of whom are in their 90s now, traveled from all over the globe in what could be one of the last large-scale gatherings for such a landmark anniversary.

In the touching ceremony, some veterans visited to ‘face their demons before going to their graves’, talk to fellow survivors and others looked to ‘rub shoulders’ with their servicemen. 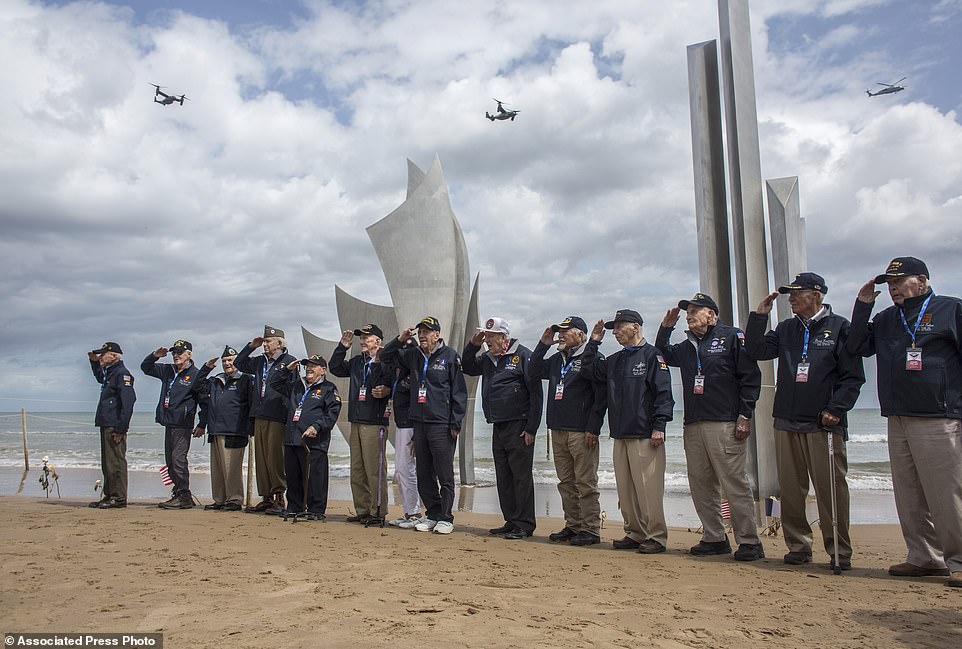 World War II veterans from the United States salute as they pose in front of Les Braves monument at Omaha Beach in Saint-Laurent-sur-Mer, Normandy, France, Monday 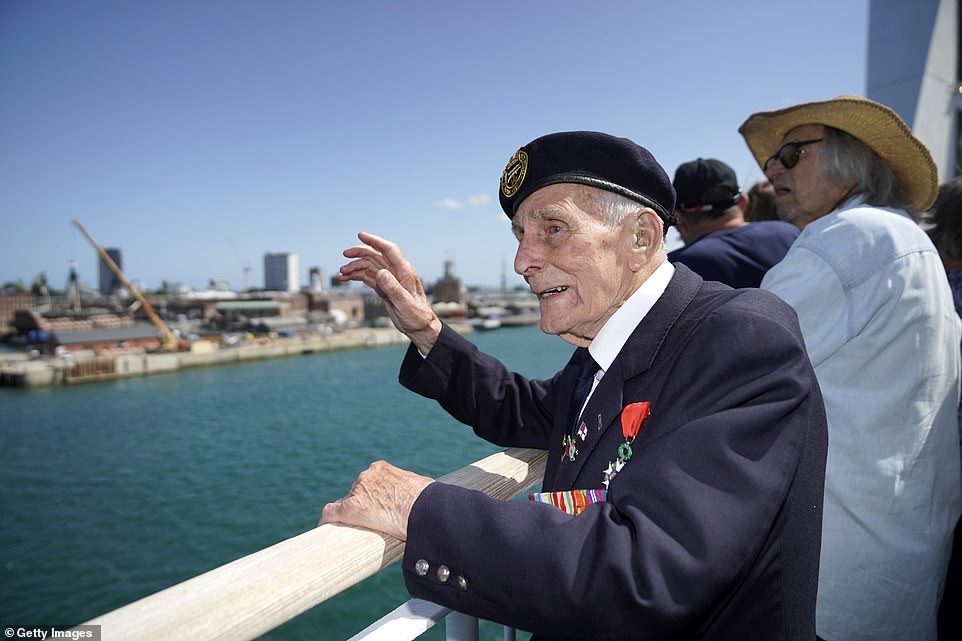 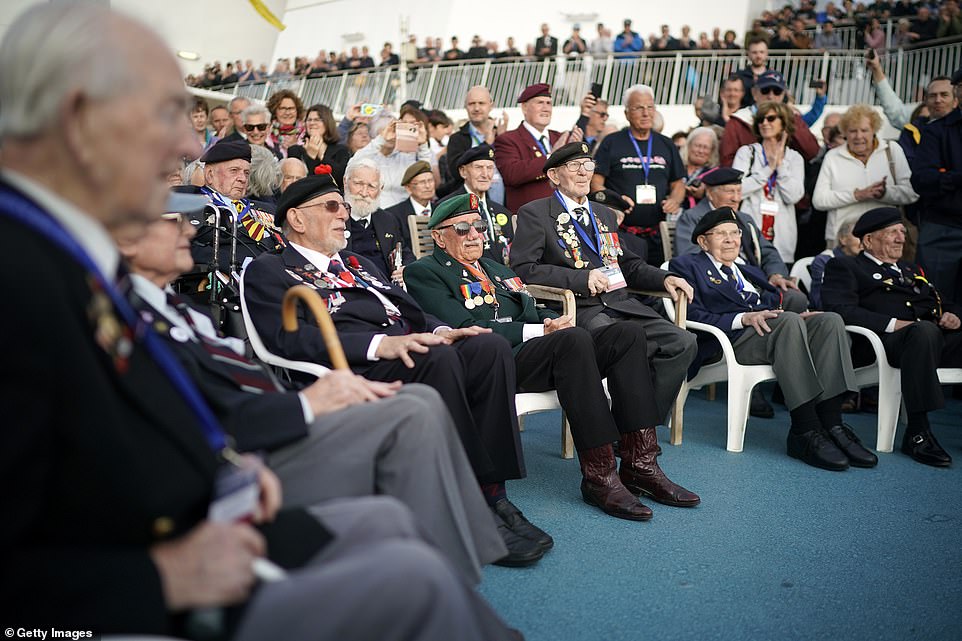 The veterans gather and have traveled from all over the world. It was estimated that 150,000 servicemen fought in the D-Day Landings that took place along Normandy beaches. 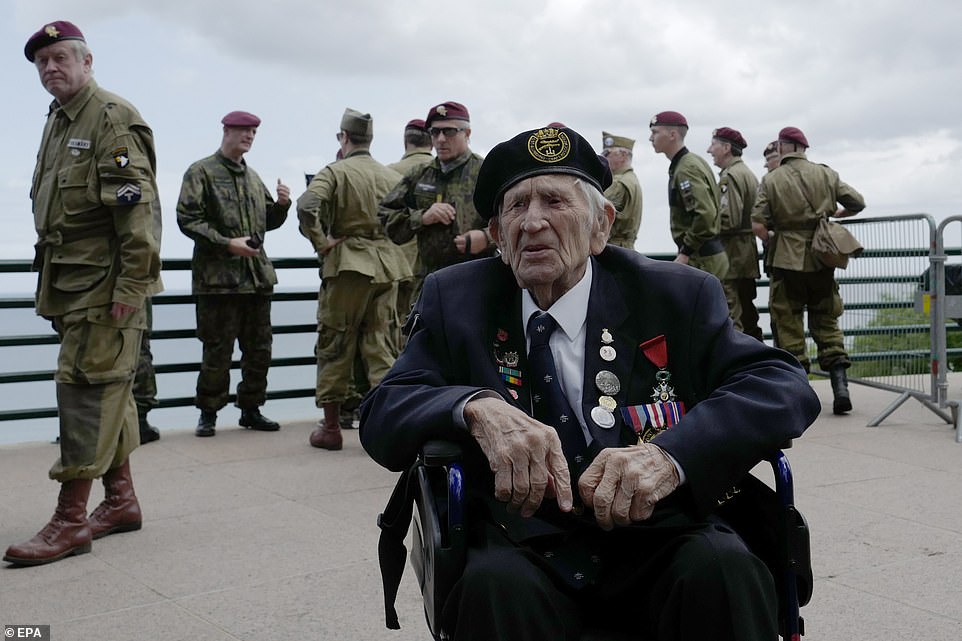 One veteran sits among other pensive-looking servicemen, all of whom would have known people who died during the D-Day landings and return to commemorate 75 years on from that date.

The US National Memorial D-Day Foundation estimate that there were 2,499 American fatalities and 1,914 from other allied nations – previous estimates were as high as 10,000 in total.

The soldiers had to struggle through 200 yards of beach, while carrying 80lb of equipment and dodge bullets flying through the air, in the hope of reaching their first protective natural feature.

The term ‘D-Day’ refers to the day designated for an invasion. Now 75-years to the day, some of the veterans share their memories and reasoning for returning.

For one, Jerry Deitch, 93, a survivor of Utah Beach – one of the five D-Day beaches invaded – he hoped to ‘keep his nerves in check’ having previously refused to return to Normandy.

‘I don’t think I can handle it. I’ll get too emotional,’ he said.

Deitch from Nevada, was 18-years-old when he landed and said, ‘after the first day I felt like I was 30. I went in a little boy and came out a man. You grow up fast.’

Serving in a U.S. combat demolition unit, his job was to clear obstacles and blow up strong points that could slow the Allied advance inland. 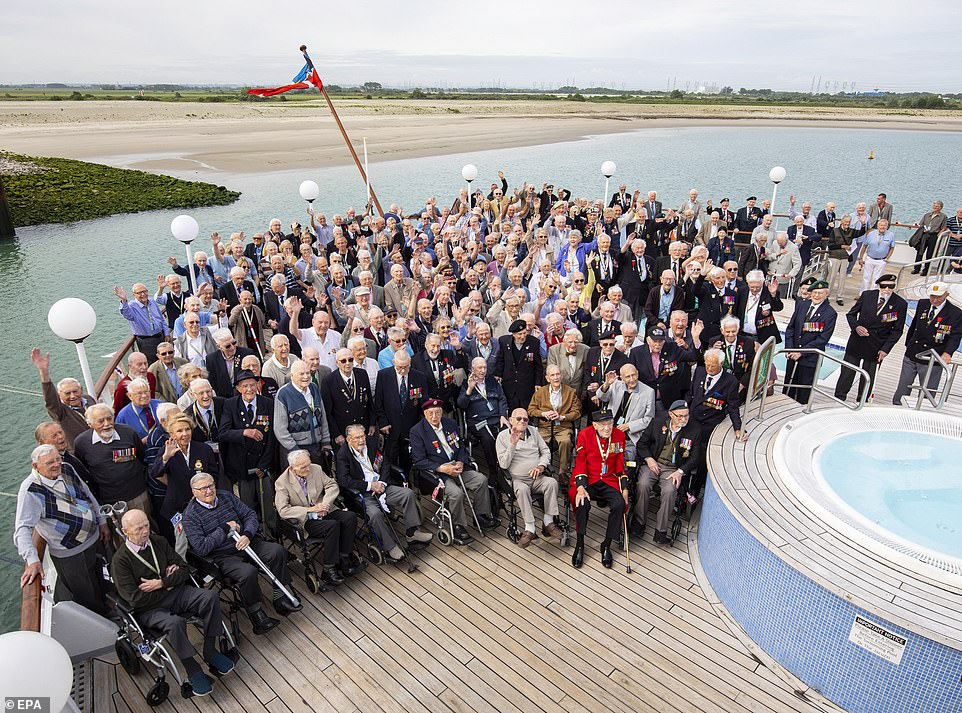 The veterans gathered 75-years after the D-Day landings to remember fallen friends, to try to overcome the mental scarring from their time at war and for others, to brush shoulders with other servicemen and women 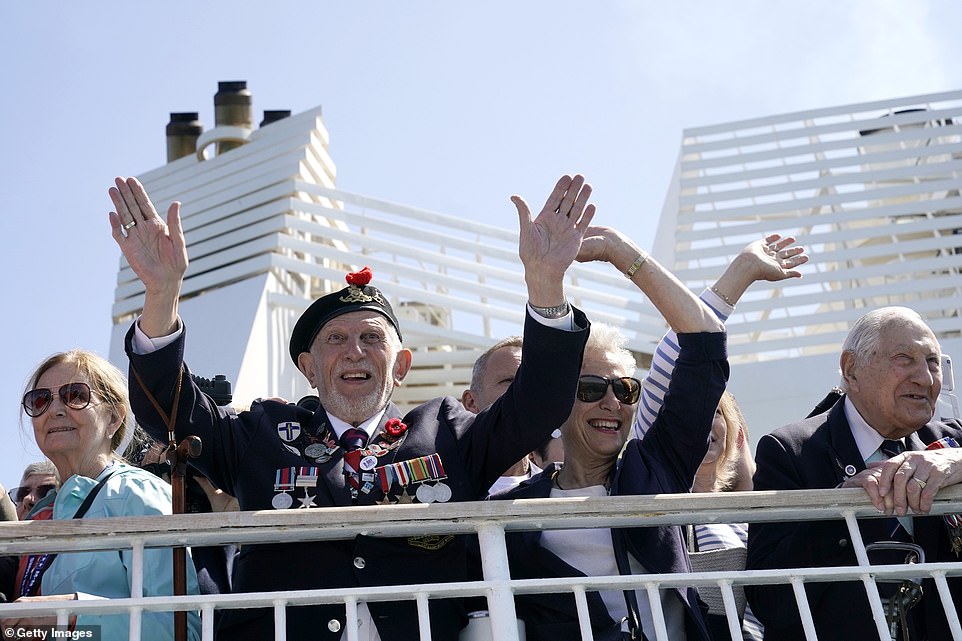 Veterans wave at the crowds during the commemorations for 75-years on from the D-Day landings on Normandy Beach, France 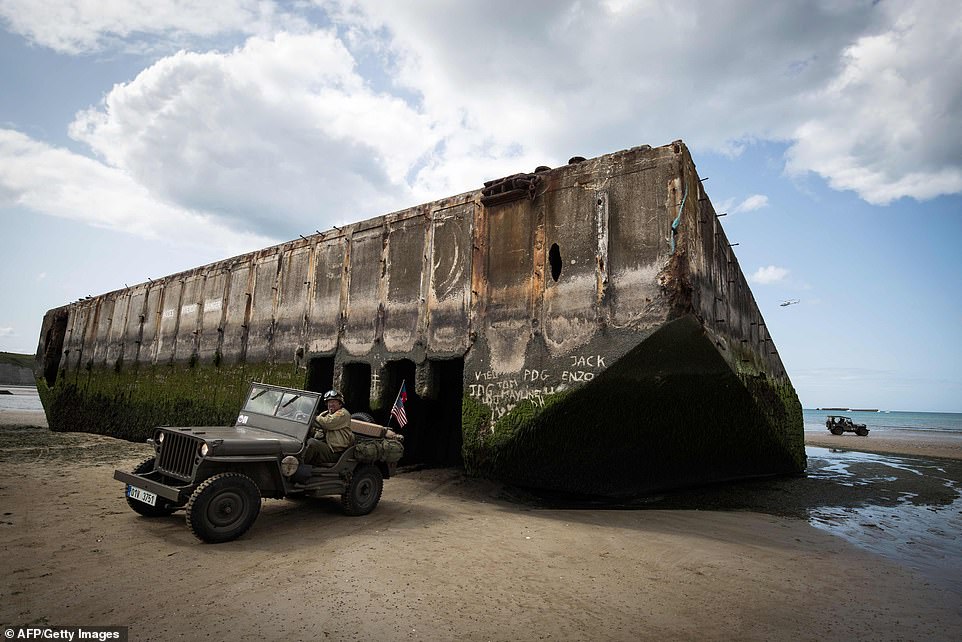 A man is pictured dressed in attired that would have been wore during the D-Day landings, new estimates believe that there were 2,499 American fatalities and 1,914 from other allied nations – previous estimates were as high as 10,000 in total

He decided he must revisit where his good friends died.

During the landings, he was hit by a piece of shrapnel that left a fist-sized dent in his helmet – giving him a concussion that forced others to evacuate him back to England.

Deitch said: ‘I know exactly where I was when I was hit. Exactly the spot. I see it in my mind all the time.’

Long unable to speak to his family about his experiences, he recently started writing down his recollections so that when he is gone, they will know what he went through.

‘It changed my life, yeah,’ Deitch said of D-Day. ‘It taught me to be very tolerant. God gives us free will; you’ve got to use it.’

Having long kept his war to himself, Deitch thanks people for listening to his recollections now.

‘I feel better when I speak about it,’ he said. ‘If you have demons, face them.’

In contrast, Russell Pickett, 94, has returned to Normandy multiple times and believes that coming back has helped him to ‘cope with the horrors’ he lived with since he was 19-years-old.

He was among the first wave of American troops aiming for Omaha Beach, the bloodiest of the D-Day landing zones.

The former private in the 29th Infantry Division was immediately injured and he still suffers from post-traumatic stress disorder.

Pickett said: ‘For a long time, I really didn’t want to come back, and I kind of dreaded it. 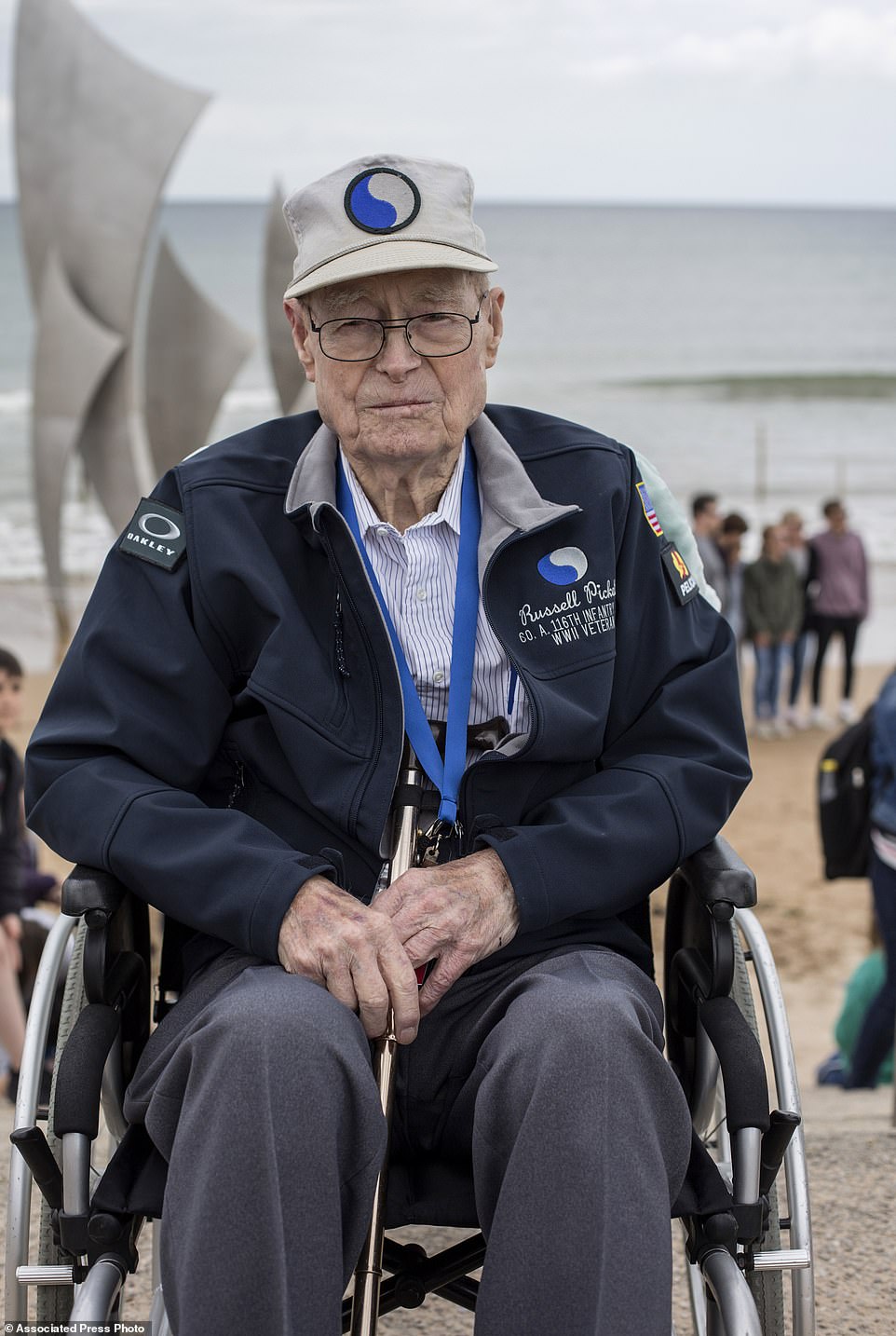 ‘I can’t say that I really enjoy the whole thing, you know? When I head back on the beach and all that kind of stuff, sometimes it does things to you.

‘But like this, you can see kind of what we was fighting for and, you know, that makes a little difference.’

With a flamethrower strapped to his back, Pickett was wounded when an explosion tore at the landing craft transporting him onto a beach which was sprayed by German machine-gun and artillery fire.

He blacked out and woke up on the water’s edge, next to a dead body and unable to move his legs.

After being plucked out of the water by another landing craft, he was hospitalized in England and then returned to Normandy, where he fought in the dense hedgerows that slowed the Allied advance and was injured again. 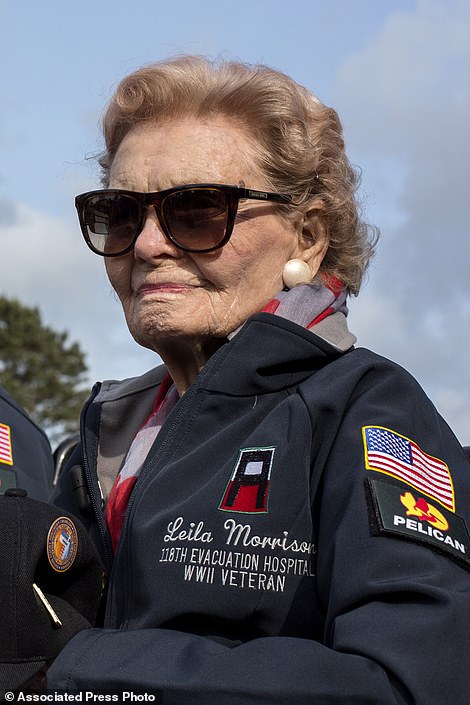 Pickett says he long tried to deal alone with his trauma before finally seeking medical help.

He said: ‘I’ve got it now where I can handle it pretty well, because you live the war almost every night, you see? And you don’t get rid of it, no matter what you do.

‘I would love to forget it, totally forget it, but no way, especially when you go through a battle like D-Day.’

The last time Leila Morrison saw Omaha Beach was when she landed on it in 1944, three months after D-Day, when she came to nurse soldiers injured in combat.

She said: ‘I felt as though when I stepped on that sand I was stepping on sacred grounds because so many people had given their all for it. It was just plain sand.’

At the end of the war, she nursed survivors of the Buchenwald concentration camp.

Morrison said: ‘I want to tell the French and the whole world how great it is that we do have our freedom, and we have so many privileges in America that other places don’t have.

‘Every day is a memorial day for me. I see those young fellas that didn’t make it. So many of them, and I am thankful over and over again.’

Helen Patton, the granddaughter of famed American tank commander, Gen. George S. Patton Jr., returns with a message that the younger generations should enjoy the liberties so many soldiers fought and died for.

While presiding over a game of American football near to the landing beaches, she quoted from a poem written by her grandfather during World War I to convey the idea that part of honoring those sacrifices is relishing life:

Patton said: ‘When I sit in my tank and wait for the hour for the great barrage to come down, I wish to god there was one more day for raising hell in town.’ 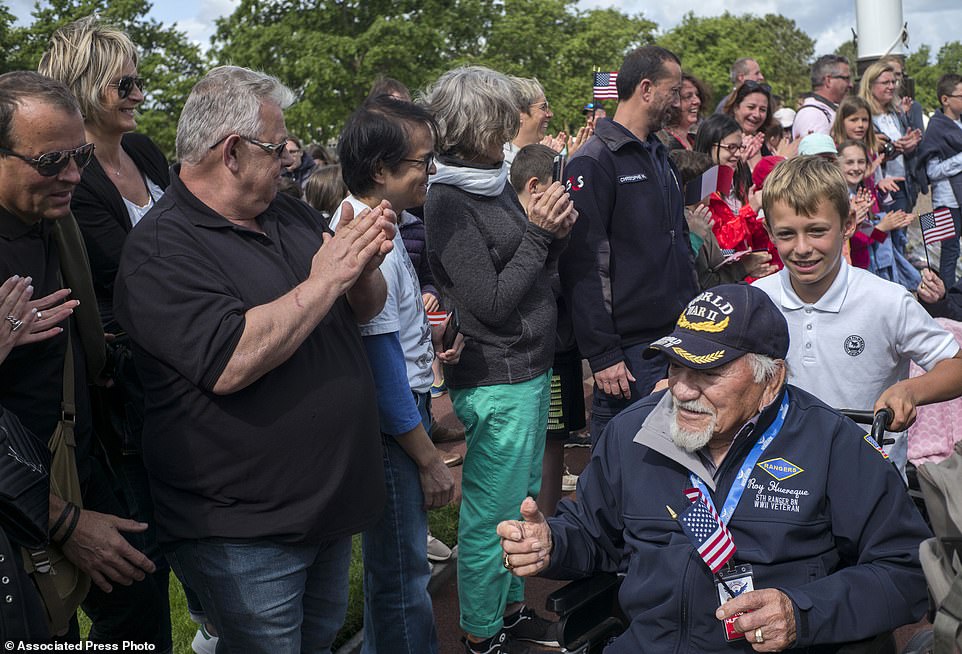 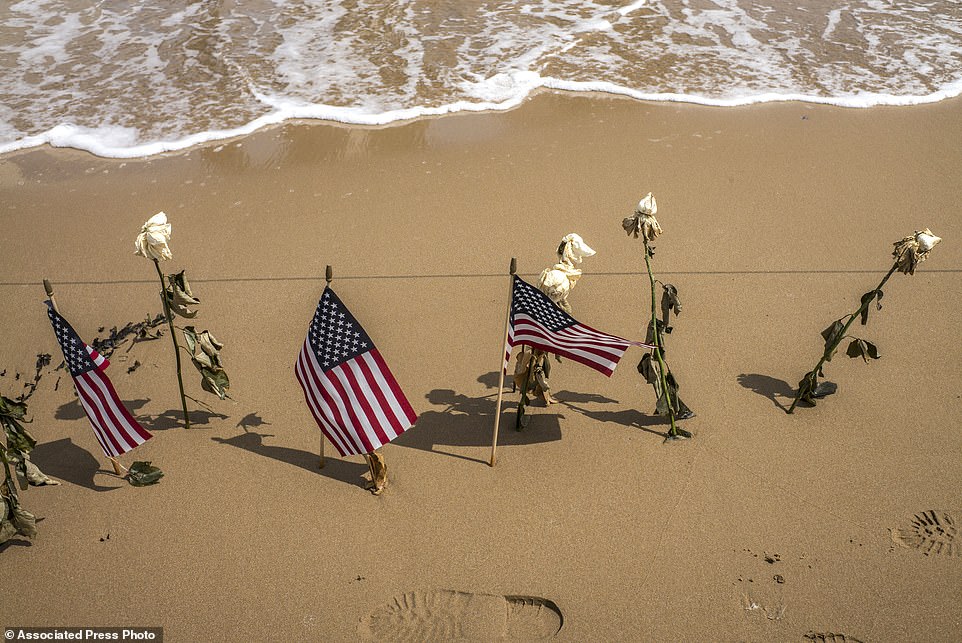 White roses and US flags are places in the sand in front of the sea at Omaha Beach in Saint-Laurent-sur-Mer, Normandy, to commemorate the D-Day invasion which took place on June 6, 1944 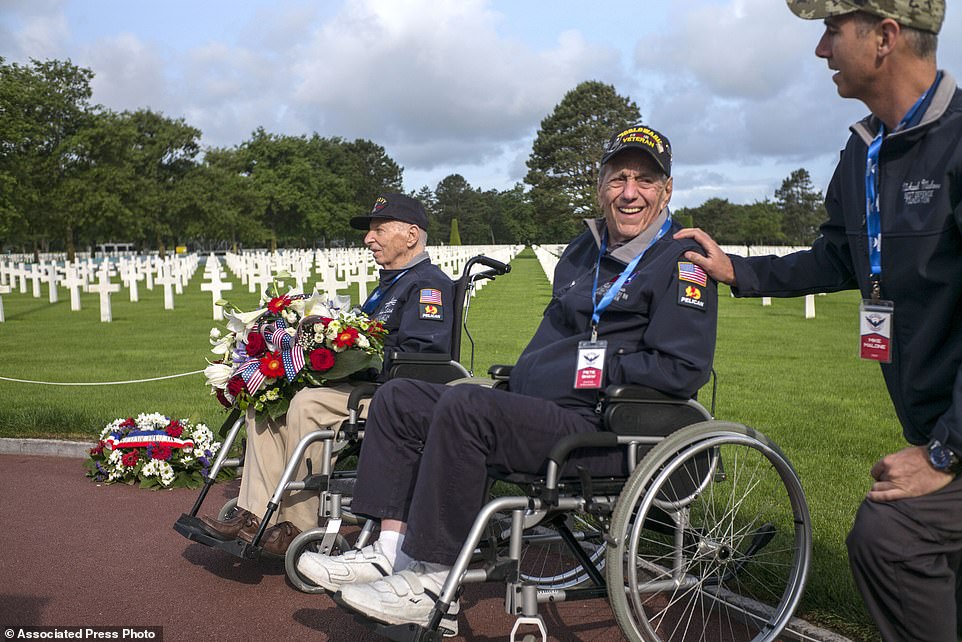 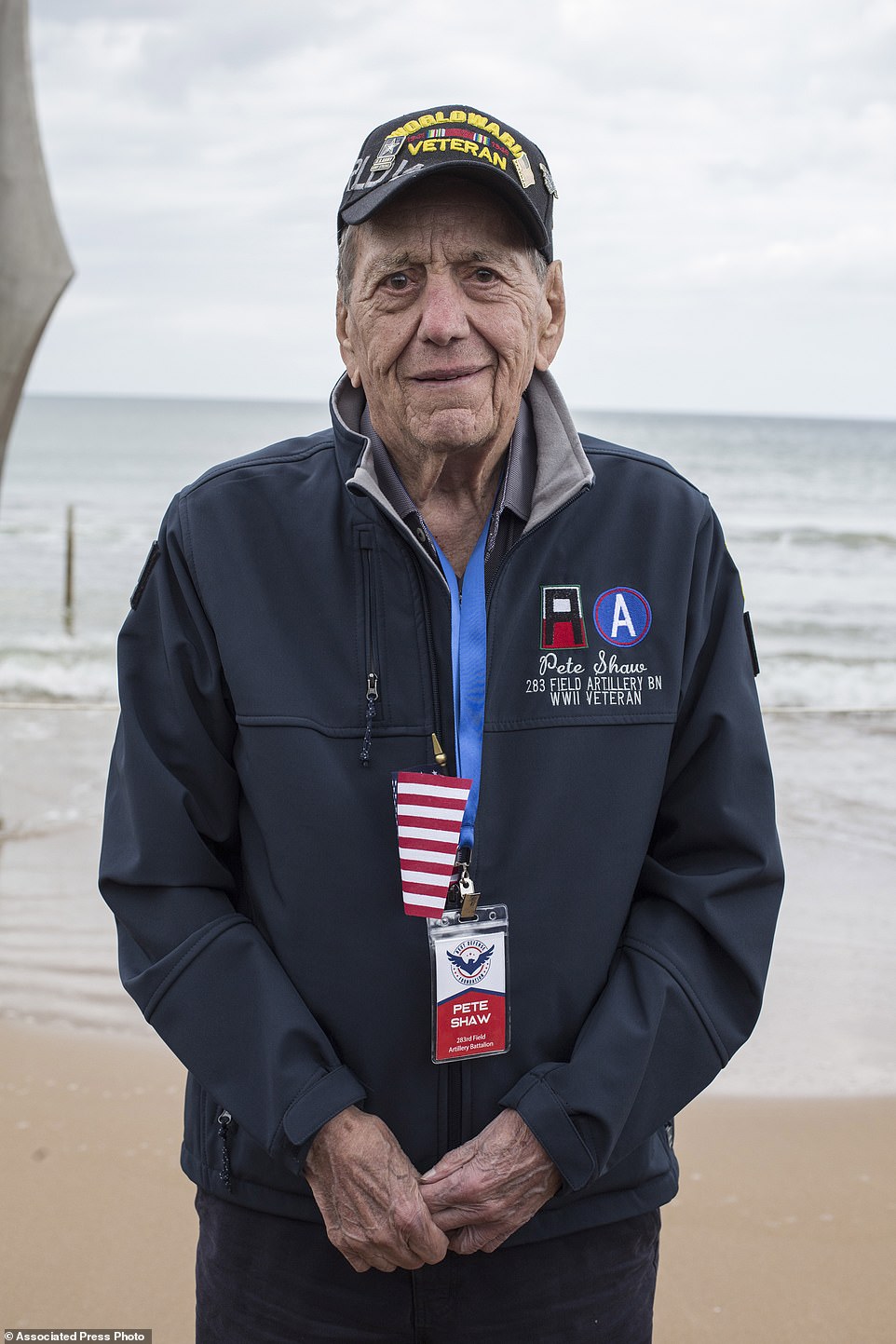 United States World War II veteran Pete Shaw, from Pennsylvania, poses at Omaha Beach in Saint-Laurent-sur-Mer, Normandy, France, Monday, June 3, 2019, which is now 75 years to the day of the landings 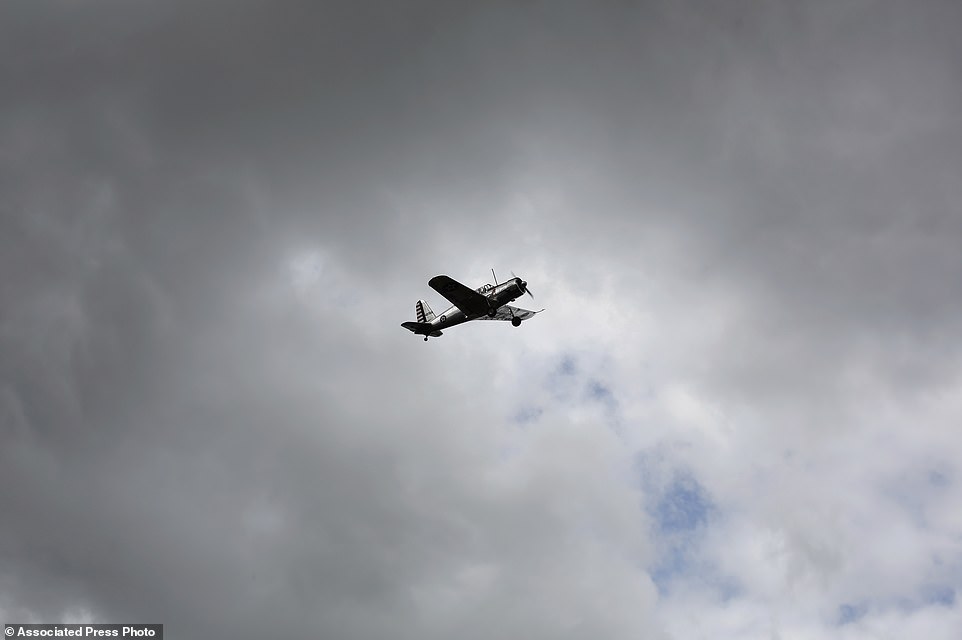 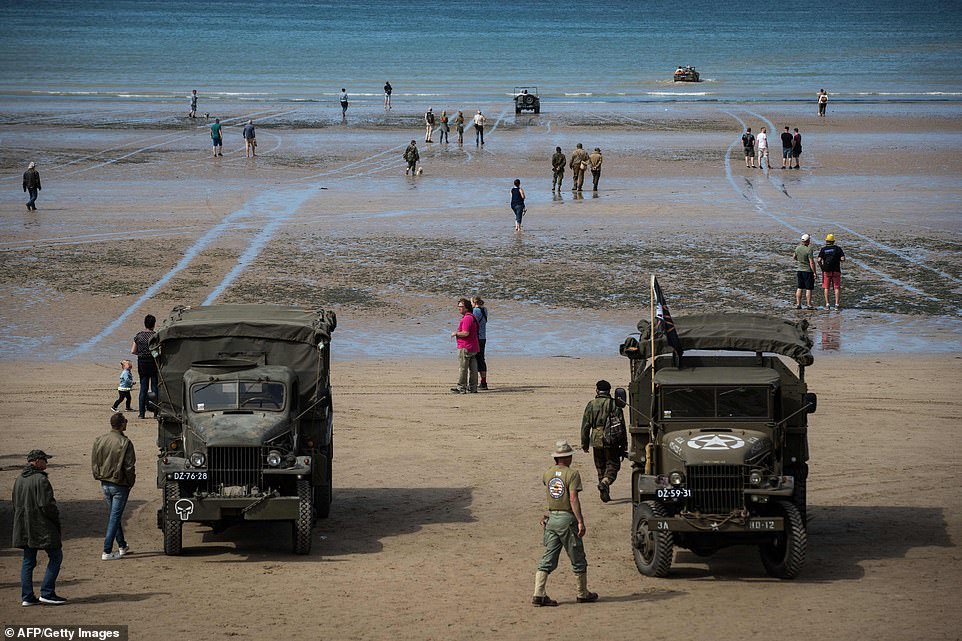 People gathered to watch the military vehicles and try to take in the realities of those service who fought, forced to charge 200 yards of beach to reach any potentially protective land-features 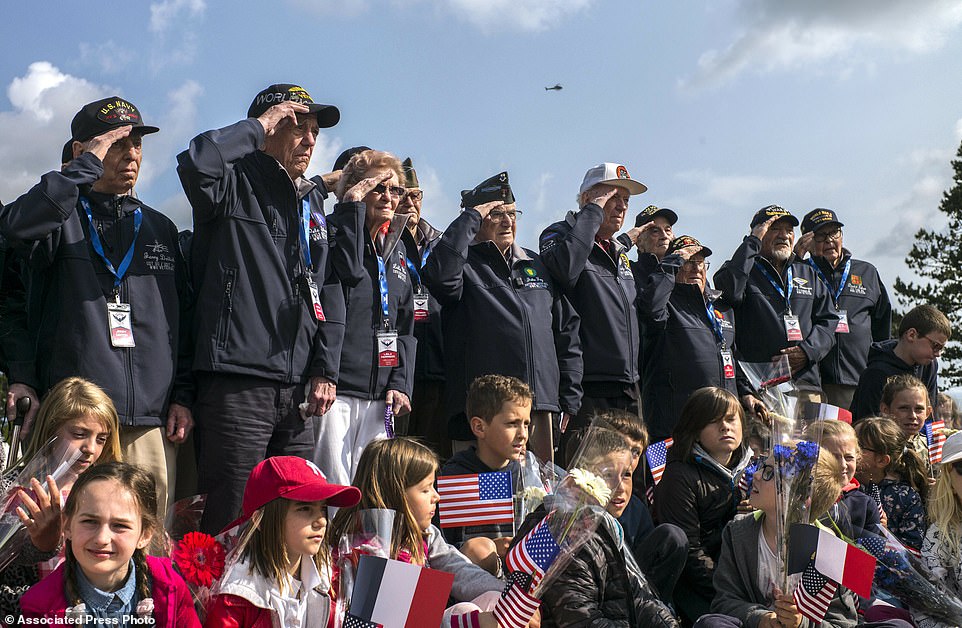 World War II veterans from the United States salute as they pose with local school children at the Normandy American Cemetery in Colleville-sur-Mer, Normandy, France,on the 75th anniversary of the D-Day landings