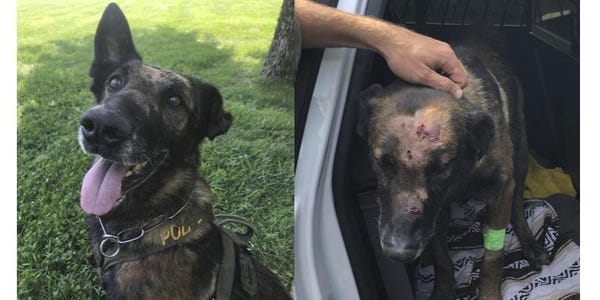 A star US Forest Service police dog survived after suffering nine stab wounds in an attack during a marijuana raid in California, the Associated Press reported.

On August 27, the 11-year-old Belgian Malinois who goes by the name "Ice" was attacked while trying to catch a suspect who ran from a marijuana raid, the AP reported. Suffering through the multiple stabs, Ice held on to the suspect until his handler, Patrol Capt. Christopher Magallon, came to arrest the suspect, according to the AP.

Magallon called a helicopter which airlifted him to a veterinary center 70 miles away from where they were when they made the arrest, the AP reported. Ice, who had been wearing a protective vest, was released that afternoon, according to the AP.

This is not the first time that Ice risked danger to protect their community. In 2016, Ice was stabbed while officers were apprehending a suspect. At the time, Ice had also held on to the suspect until officers were able to make the arrest, according to the US Forest Service, and was later transported to a veterinary hospital for surgery.

"When I realized Ice had been stabbed, he was bleeding profusely, and though critically injured, he never let out a whine or whimper," Magallon said in a news release by the US Forest Service at the time.

Ice is a decorated K-9 dog, who has won a number of accolades for his service. After the 2016 attack, he won the Law Enforcement and Investigations Director's Award for Valor and Heroism, the AP reported. In 2017, he was named the top dog in the Law Enforcement/Arson Dogs category in the American Humane Hero Dog Awards, according to the US Forest Service.