A group of Andrews government MPs believe the toughest lockdown rules may need to be lifted because driving Delta cases close to zero may not be attainable.

A senior government source, speaking anonymously to detail internal thinking, said there was no realistic prospect of the lockdown easing on Thursday, and some MPs argue the government may need to ease some rules and consider freedoms for those fully vaccinated in coming weeks. 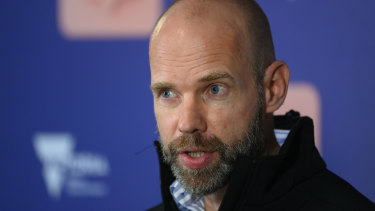 Jeroen Weimar speaking to the media on Saturday.Credit:Eddie Jim

Another 64 cases were recorded in Victoria on Saturday including 15 with an unknown source. A new cluster of four cases in Port Melbourne emerged and 21 cases came from the western suburbs, where authorities believe the virus is circulating widely.

While COVID-19 commander Jeroen Weimar emphasised the current lockdown had stopped the outbreak from exploding, new clusters continue to emerge and a call by prominent University of Melbourne epidemiologist Tony Blakely last week to consider a lighter lockdown sparked conversation among ministers and MPs dealing with increasingly despondent constituents.

Seven of the 10 Labor ministers and backbenchers who spoke to The Sunday Age on Saturday said current settings – including a curfew, ban on playgrounds and clamps on essential sectors – should remain until no newly infected people spent any time infectious in the community.

But three MPs have turned their mind to the prospect that, as a number of epidemiologists have argued, the state will not be able to extinguish this outbreak and the potential for new introductions from NSW meant Victoria would need to keep managing fresh outbreaks. They argue some rules may be able to be eased without risking a major spike in cases. 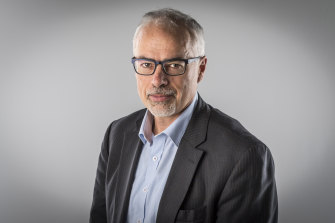 One minister said the government needed to consider which restrictions could be eased to reduce the financial and mental health burden on Victorians, should it become clear reducing cases near zero was unachievable in the next few weeks. “How can we take the pressure off to make people’s lives easier?” the minister asked.

“Every percentage point of vaccine coverage brings the risk down and brings closer and closer the point when you ask yourself whether we need to ease.”

A senior MP backed the minister’s view and said Chief Health Officer Brett Sutton’s public health team should determine the types of freedoms that would not “blow the place up” while cases were still being recorded.

“I don’t see us getting to zero,” the MP said, “so can we allow some limited things like allowing double-vaxxed people to visit loved ones or relatives in aged care under very controlled rules?”

Conversely, another minister and backbencher said the current lockdown settings should continue until there was no risk of a flare-up in cases once rules were eased. “We all know how hard this is, but there’s no option. We’ve come this far and people are more resilient than some think,” the minister said.

A backbench MP said: “This is probably our last lockdown if we crush it.”

NSW recorded 1035 cases on Saturday but is planning to allow weddings and outdoor gatherings in coming weeks despite its health system being stressed due to rising case numbers.

Professor Blakely’s modelling on his proposal to lighten the lockdown, which he said would improve Victorians’ mental health, forecasts cases would rise to about 400 a day before vaccine coverage caught up and curtailed the spike by mid-October. His modelling underpinned the state government’s road map out of last year’s months-long lockdown. 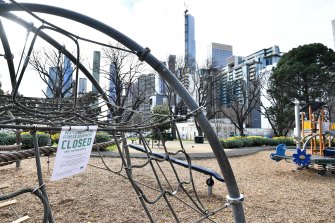 Under an option put forward by the professor, strict rules would remain but more time would be allowed outside, the travel limit would become 10 kilometres, some retail could open and essential sectors like construction could return to greater operating capacity.

Since making the proposal on Monday, Professor Blakely said the trajectory of Victoria’s outbreak had not improved, and it would probably take several more weeks for the tight lockdown to bring cases down.

He said the government may soon choose to ease some rules like the playground ban and curfew and argued the difficulty of reducing cases close to zero necessitated a “serious discussion about whether we stay in hard lockdown or ease off some rules”.

“Basically, giving back some of the [freedoms] to the population, that were worth a go for a couple of weeks but are probably not game-changers,” he said.

Of Saturday’s cases, 21 were linked to the western suburbs of Wyndham, Newport and Altona, 10 were from Broadmeadows, nine were associates of previous cases, seven were based in Shepparton, seven were from Carlton and Brunswick, one was connected to Al-Taqwa college and one was from Dandenong.

In positive news, Mr Weimar said 20 previously unlinked cases had been matched to a known case, with 41 cases still without a clear source.

A Carlton and Brunswick cluster has 35 cases connected to it and three cases announced on Saturday were linked to Barkly Square Coles. A new cluster of four linked to an industrial pocket in Port Melbourne concerns authorities because its genesis in unknown, while community transmission is continuing in the western suburbs.

Mr Weimar and Health Minister Martin Foley said authorities were committed to the national cabinet plan to aggressively suppress the virus in the hopes of opening up well before the state reached the vaccine target of 80 per cent when lockdowns should probably not be needed.

“I’m absolutely convinced that if we continue to see the response we’re seeing on the ground that we have an opportunity to run this to ground.”

Mr Foley said the COVID-free status of some Australian states was “valuable to protect”, with the ACT and Victoria working to regain this status.

He said if NSW’s leaders had their time again “they might well have gone harder and earlier at the start of their outbreak”.

“I would not be putting the Victorian healthcare system under that amount of pressure,” he said.

“What is at stake here is not just weddings, and social events. It’s life and death decisions that keep our health system operating at a level that Victorians would want to achieve.

“I’m not sure 1000 cases a day is a sign of hope … I’m pretty sure that if you ask those intensive care nurses in Sydney hospitals at the moment how they saw the situation, it wouldn’t be a hugely rosy picture.”