New York: The Biden administration will continue a Trump-era push to represent the former president in a defamation lawsuit brought by author E Jean Carroll, according to a night appellate court filing.

The lawsuit brought by Carroll – who accused Donald Trump two years ago of sexually assaulting her in the 1990s – has been stalled in litigation over whether the US Justice Department had standing to represent him on the grounds that his curt, insulting denials in response to her claim were made in the course of performing his presidential duties.

The department’s filing indicates the Biden administration has decided to keep pushing to be allowed to treat a sitting president’s comments – albeit in response to a personal issue – as an official function of the office for the purposes of litigation that may arise from those comments. 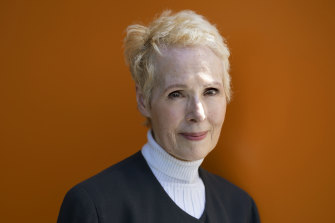 E. Jean Carroll, who alleges Donald Trump sexually assaulted her in a New York department store dressing room in the 1990s, is suing him for defamation.Credit:AP

The department’s Civil Division lawyers began the appeals process while the question lingered whether the Biden administration would continue to advance the legal cause, an issue that has the potential to set a precedent for the current or future sitting presidents and, according to the filing’s authors, could leave vulnerable other Executive Office of the President officers and employees.

“Speaking to the public and the press on matters of public concern is undoubtedly part of an elected official’s job,” a 24-page reply brief filed to the US Court of Appeals for the 2nd Circuit on Monday evening read (Tuesday AEST), confirming that the new administration did not intend to withdraw from a position first taken under former attorney-general William Barr.

“Courts have thus consistently and repeatedly held that allegedly defamatory statements made in that context are within the scope of elected officials’ employment-including when the statements were prompted by press inquiries about the official’s private life,” the lawyers argued, later noting that when White House reporters requested comment on Carroll’s allegations, “their questions were posed to him in his capacity as President.”

Marc Kasowitz, a personal lawyer for Trump, submitted his own appeals brief in support of the Justice Department’s bid to re-enter the case. 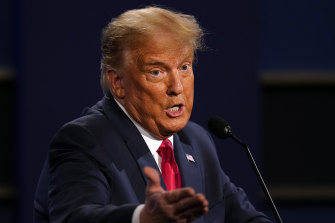 US President Donald Trump has said his accuser, E. Jean Carroll, was “totally lying” to sell a memoir.Credit:AP

Roberta Kaplan, Carroll’s lawyer, said in a statement that it was “truly shocking that the current Department of Justice would allow Donald Trump to get away with lying” about raping Carroll, “thereby depriving our client of her day in court”.

“The DOJ’s position is not only legally wrong, it is morally wrong since it would give federal officials free licence to cover up private sexual misconduct by publicly brutalising any woman who has the courage to come forward,” the statement continued.

“As women across the country are standing up and holding men accountable for assault – the DOJ is trying to stop me from having that same right,” Carroll said in a separate statement. “I am angry! I am offended!”

Carroll sued Trump in 2019, months after she published an account that described the former president sexually assaulting her inside a dressing room at the Bergdorf Goodman department store in Manhattan in the 1990s. The lawsuit was filed in response to denials made by Trump in which he accused the longtime journalist and advice columnist of lying, denied even knowing Carroll and suggested that he couldn’t have had any kind of sexual encounter with her because she wasn’t his “type.”

Justice Department attorneys who penned the new brief noted that Trump’s statements which “attacked” Carroll’s appearance, “impugned her motives, and implied that she had made false accusations against others … were without question unnecessary and inappropriate,” but said the crude remarks amounted to a denial of her claims and were still made in the context of Trump’s presidency.

The former Elle columnist’s accusation of rape was in an excerpt from her book “What Do We Need Men For? A Modest Proposal,” which was published in New York Magazine.

The Justice Department’s attempted intervention on Trump’s behalf was controversial and seen by critics as an inappropriate bid by Barr to insulate the president from personal liability in what Carroll’s lawyers said was a purely personal matter – the alleged conduct having occurred decades before Trump took office. 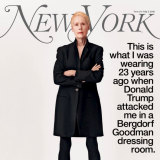 In October, US District Court Judge Lewis Kaplan ruled that Trump did not qualify as an “employee” of the government as defined by federal law and that he was not acting “within the scope of his employment” when he publicly responded to Carroll’s allegations. Kaplan ruled that Trump’s personal lawyers would have to resume their defence of him in the ongoing lawsuit.

If the Justice Department ultimately succeeds in interjecting itself to represent Trump, it will likely invoke a “sovereign immunity” claim which could end the case because the legal notion prohibits lawsuits against the government.

Since leaving office, Trump remains burdened with investigations and lawsuits. In New York alone, the Manhattan district attorney and the New York Attorney-General have pending criminal and civil investigations into his company, the Trump Organisation. Also in New York, former Apprentice contestant Summer Zervos, who accused him of sexual misconduct, has a defamation case against the ex-president.