THE ASTRAZENECA Covid vaccine appears to work better against the Brazilian variant than first thought.

The stain, called P1, has characteristics which help it to dodge the immune system. 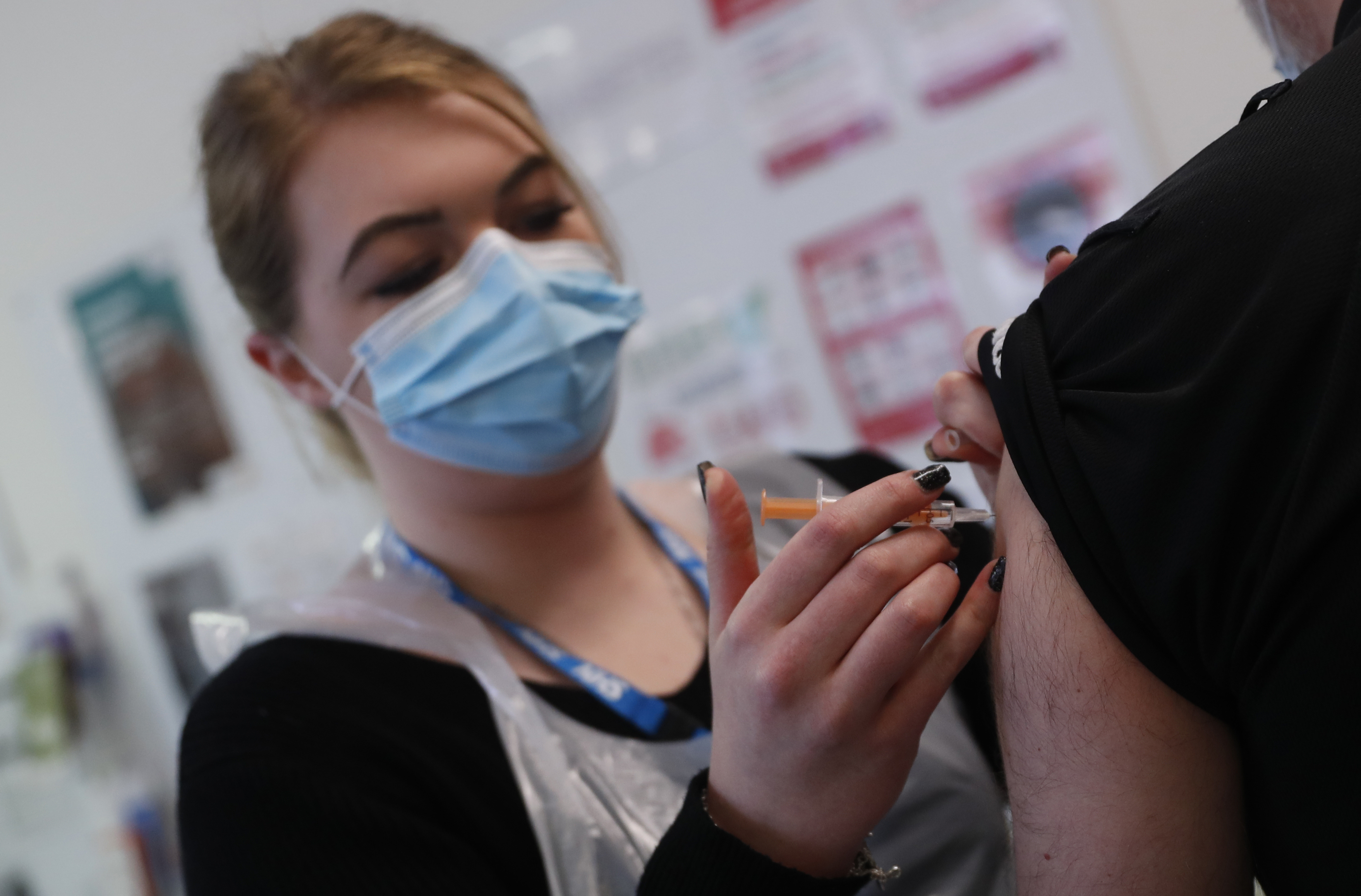 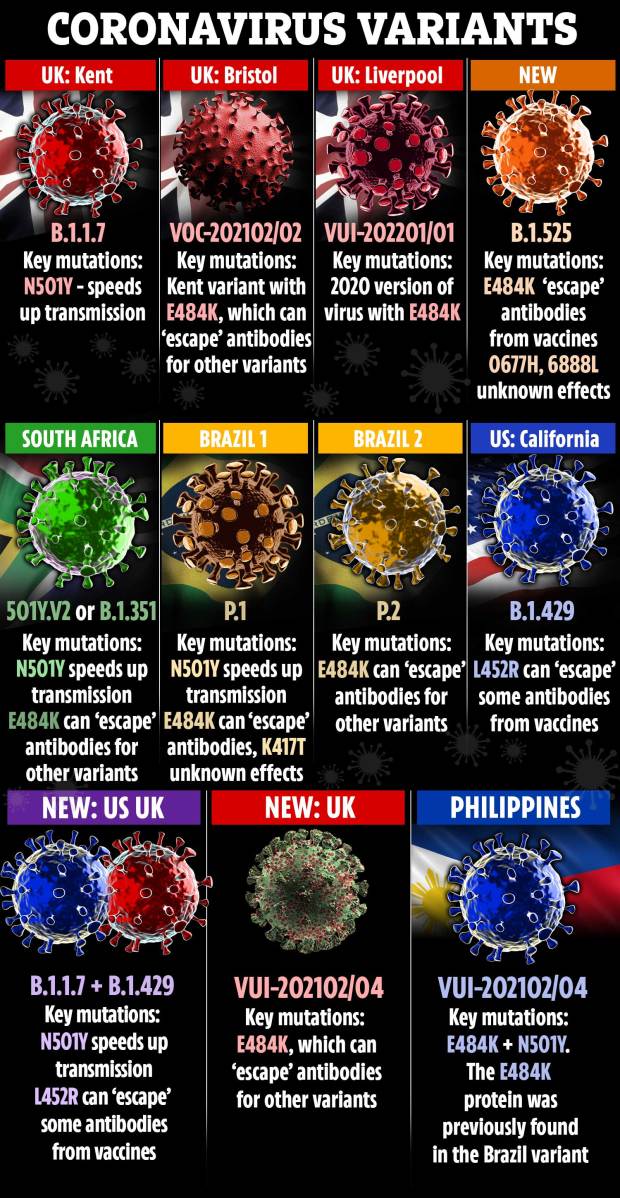 Similarly, the South African variant has these concerning mutations.

Research from Oxford University, which has not yet been peer-reviewed, studied whether its own vaccine, produced by AstraZeneca (AZ), and the Pfizer jab are effective against new strains of Covid.

Scientists took blood samples of people who had natural immunity from prior infection or a vaccine.

They analysed how the blood samples reacted to new coronavirus strains by measuring antibody levels.

Antibodies are proteins produced by the immune system to either neutralise (kill) or prevent infection.

Based on the level of antibodies, the study found that vaccines do not work as well against new variants as they do against the original strain of coronavirus.

The data showed a nine-fold and 7.6-fold reduction in antibodies produced after the AZ jab and Pfizer jab, respectively, against the South African strain.

There was a nearly three-fold reduction in the level of virus neutralisation by the antibodies generated by the vaccines against the Kent and Brazilian variants.

Given that the Brazilian variant has similar mutations to the South African one, the authors said it was assumed that the neutralising antibodies would be similarly affected.

But Professor Gavin Screaton, lead scientist on the latest study, said antibody responses to the P1 variant may be “similar” to the Kent strain.

And the Kent strain is known to be effectively suppressed by the vaccines used in the UK.

What is the Brazilian variant?

The spike protein is the part of the virus, SARS-Cov-2, that attaches to human cells and allows the virus to infect the body.

As a result, it is the part of the virus that the Covid vaccines are designed to target.

That's why scientists believe while the jabs should still work, they could be less effective against the Brazilian and South African strains.

It is not yet known if the mutation causes more severe Covid-19, but evidence suggests it may be more transmissible.

Porton Down scientists are conducting more analysis to confirm evidence that indicates the strain does not cause any higher mortality rate or that it affects the vaccines or treatments.

It was detected in Brazil and in travellers from Brazil to Japan, and contains a unique constellation of lineage defining mutations.

Like the South African variant, the Brazilian one carries a mutation in the spike protein called E484K, which is not present in the original UK strain, or the widely circulating Kent strain.

The E484K mutation is present in the South African and Bristol strains.

The E484K mutation is thought to help the virus bypass the immune protection provided by prior infection or vaccination through antibodies.

Scientists analysing the Brazilian variant say the mutations it shares with the South African variant seem to be associated with a rapid increase in cases in locations where previous attack rates are thought to be very high.

Professor Andrew Pollard, Chief Investigation on the Oxford University vaccine trial, said: “These further efforts to investigate the relationship between changes in the virus and human immunity provide new insights that help us be prepared to respond to further challenges to our health from the pandemic virus, if we need to do so.”

It comes after previous research had shown the Pfizer vaccine made antibodies that could neutralise an engineered version similar to the P1 Covid strain.

There were uncertainties around how the P1 variant would respond to vaccines, with research from Brazil showing it was able to reinfect people already recovered from Covid.

Scientists said up to 61 per cent of people in Manaus – the city where the variant emerged – were susceptible to picking up the new P1 variant, despite previously having Covid.

After the findings of the Oxford study today, scientists said there should be a focus on developing new vaccines that work more efficiently against the South African strain.

Studies by jab manufacturers have shown the South African strain is the most problematic and worked less effectively in South Africa during clinical trials.

It comes after more confirmation the vaccine rollout is having a positive impact on the UK’s outbreak.

So far, 25 million people have received the first dose of either the AZ or Pfizer jab – however this will slow down over the next month due to a shortage in supplies.

The Health Secretary Matt Hancock revealed new findings of the efficacy of the vaccines from Public Health England.

He said a single dose of either vaccine gives 60 per cent protection against catching the coronavirus, and if you live with someone who is vaccinated, you have a 30 per cent lower risk.

The jabs also reduce the risk of hospital admission among people aged over 80 by 80 per cent, and the Pfizer vaccine is 85 per cent effective at preventing deaths among this age group.

Mr Hancock said about nine in 10 people aged around 70 have coronavirus antibodies thanks to the vaccination programme, which explains why deaths in the UK are “falling so fast”, down a third in the past week.

Dr Mary Ramsey, Public Health England’s head of immunisation, told the briefing the latest figures illustrate the jabs are “effective”, with “good protection in the over-70s”.

Meanwhile, new cases of the Brazilian and South African variants were identified in the UK.

The Department of Health and Social Care said one case of the Brazilian variant was found in the West Midlands, while another was identified in Haringey, north London.

A total of nine cases of P1 have been found in ENgland, and three in Scotland.

The South African variant was also identified in the Sandwell area of the West Midlands. It was identified in a person who had arrived and quarantined at Birmingham Airport.

Surge testing is now being deployed to residents in the area to control any spread.