A quirky remnant of Yarraville’s pigeon-fancying past could be demolished after the 94-year-old weatherboard hall, nestled in suburbia, goes up for auction next month. 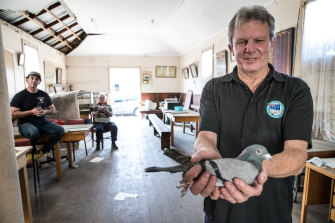 The local history society is against demolition, but club president John Saggers, 63, is sad but realistic about the fate of a place still adorned with pictures of past champion humans and pigeons.

Mr Saggers said the hall would probably be demolished and the new owners would "have the right to do whatever they want to it, as long as they get council permission".

The building, made of weatherboard with a hardwood floor and corrugated iron roof, is not heritage listed, although a permit would be needed from the Maribyrnong City Council to undertake works, which could include demolition.

"Keeping the building intact preserves the social history of the local area," he said. 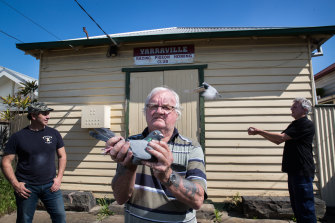 Tate Moore, from auctioneers Jas Stephens Real Estate, said the place was hard to value, because there was no precedent.

He hasn’t previously handled a pigeon clubhouse sale "and probably never will again".

Mr Moore said some prospective buyers were interested in incorporating the existing hall into a residence; others were not.

He said the 195 square metres of land was a good size for a single-fronted home, offered rear access into Brooks Place and was close to the train station, schools and Yarraville and Seddon shops. 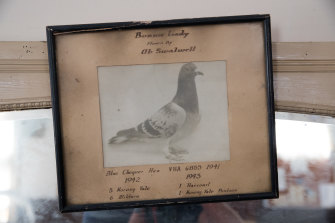 Photo of a 1940s champion bird in the hall.Credit:Jason South

The sale will break Mr Saggers' 75-year family link to the site.

His father Max and uncle Les joined the club in the mid-1940s after army service.

As a child in the early 1960s, John remembers regular pigeon shows in the hall and talks on how to prepare pigeons for races.

There were mysterious smoke nights. "I don’t know what that entailed," Mr Saggers said. "I was always too young and never allowed to go."

A personal highlight was in 1998 when his pigeon, Toey, beat 1500 other western suburbs birds released in north-western New South Wales, to be first home over 600 miles (965 kilometres) and 14 hours.

At the hall, he slotted the bird's leg ring in to the pigeon time stamping clock. There was no wild party but "it was an adrenalin rush", Mr Saggers said.

The club held barbecues where members teased each other about football, not pigeons.

"No one ever knocked anyone for coming last in pigeons. In pigeon racing you can run first one week and last the next."

Today, the club has eight members and can no longer afford the hall's rates and insurance.

Yarraville members will continue to meet at the Western Pigeon Federation in Sunshine.

Proceeds of the Yarraville hall sale will go into a trust for future projects such as buying equipment and advertising to recruit new members.

10/21/2020 World News Comments Off on Auction date set for Yarraville pigeon hall as members fly the coop
Recent Posts
We and our partners use cookies on this site to improve our service, perform analytics, personalize advertising, measure advertising performance, and remember website preferences.Ok