Sandy Duffield is one of thousands of Australians trying to make the best of Christmas Day in hotel quarantine after returning from overseas.

To that end, she spent months working with a group of volunteers to help those spending December 25 stuck in a hotel room enjoy the day as much as possible. 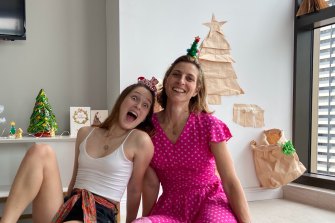 Christmas Day in hotel quarantine for Sandy Duffield, who is at the Meriton on Sussex Street in Sydney with her two teenage daughters.Credit:Sandy Duffield

Ms Duffield connected with others online months ago to form the group Hotel Quarantine Christmas.

"We really felt Christmas in quarantine was just going to be quite difficult for a lot of people with their kids and Santa and mental health," she said. 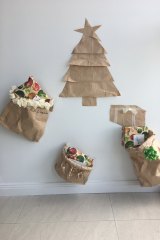 Sandy Duffield has made Christmas decorations out of the brown paper bags that meals are delivered in.Credit:Sandy Duffield

With the help of Fiona Pyke, who went through hotel quarantine in November, Ms Duffield organised for nurses to hand out chocolate bars to everyone tested for COVID-19 on Friday at Sydney hotels the Meriton Suites on Sussex Street and Adina at Town Hall. That included Ms Duffield and her family.

Ms Duffield said her hotel room at the Meriton looked like brown paper had "thrown up" on it after she used food delivery bags to make Christmas decorations with her two teenage daughters.

"You have never realised how many things you can do with masking tape and brown paper bags," she said.

She also received a tree and bon bons from the hotel on Christmas Eve.

About 7000 people are spending their Christmas Day in hotel quarantine in Sydney. There are about 2000 doing so in Melbourne, including 48 who arrived from Greater Sydney or the NSW Central Coast since border controls were reinstated in the wake of the current COVID-19 outbreak in Sydney.

Another 140 international arrivals were expected to land at Melbourne Airport on Christmas Day, adding to the 1983 people who were in hotel quarantine as of 11pm on Thursday.

Four international planes are expected to arrive in Melbourne on Boxing Day along with another 111 domestic flights.

Scarlett, Harrison and Nick Bradshaw (aged six to 13) spent Christmas Eve decorating their room at the Novotel on Collins Street in Melbourne and making a gingerbread house. 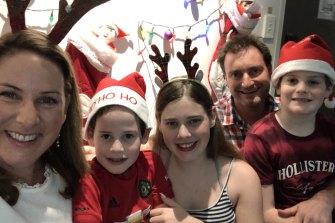 The Bradshaw family at the Novotel in Melbourne after landing from London.Credit:Emma Bradshaw

"We are so thankful to be home and can’t wait to get out into the sunshine in the new year," mother Emma Bradshaw said, before the family of five spent Christmas Day on FaceTime with family.

The parents had a Christmas lunch of cold cut meats, prawns, chicken and roast vegetables while the children had burgers, fries and pudding with gingerbread men and ice cream.

Ms Bradshaw even managed to arrange pre-made pavlovas with fresh mango, strawberries and passionfruit thanks to a Woolworths delivery to the hotel room. 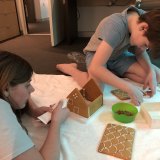 The 500 children in Victorian hotels were also offered colouring-in books and activity packs.

"To help spread some holiday cheer, hotel quarantine staff are doing what they can to help residents celebrate Christmas with some presents delivered to their door, a traditional Christmas lunch and even a mini Christmas tree in their room," a spokeswoman for the Victorian government said.

While Victorians in hotel quarantine can't order care packages or, for the most part, presents delivered to their hotels –unlike in Sydney – they were able to order gifts through a special program with Target to be delivered for Christmas.

Most hotels around the country provided classic Christmas lunches with staples such as ham, turkey or prawns for meat-eaters. 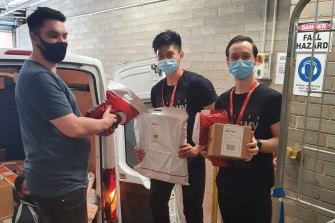 NSW Health said every apartment in special health accommodation had been offered cut-out Christmas trees, decorations, a Christmas meal, and hampers with pudding and bon bons.

Extra psychology services were also supporting people struggling by themselves in quarantine over Christmas. 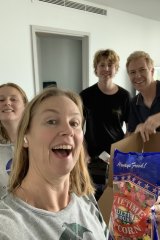 The Pirenc family were relieved to be back in Australia at the Meriton, where they have three bedrooms between mother Samantha, father Lou and teenagers Tom and Manon.

"Knowing we would be here in quarantine on Christmas Day means we have all mentally adjusted to it months ago," Ms Pirenc said. "We certainly feel very lucky to be home again and will be counting our blessing this Christmas.

"We are currently playing Monopoly right through to the end for the first time because we don’t have to be anywhere."

At the Howard Springs quarantine facility in Darwin, Georgia Wilkinson, who has just come back from two years in Germany, was hoping to convince her neighbours to dance to carols on their balconies.

Guests decorated their balconies, too, and Ms Wilkinson's neighbour Petra was dressed up in red with a Santa hat.

"I'm so relieved to be coming back to Australia now," Ms Wilkinson said. 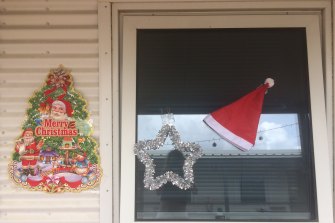 Christmas at the Howard Springs quarantine hotel in Darwin.Credit:Georgia Wilkinson

"I'm hanging fairy lights on the verandah but some people have gone all out with big blow-up candy canes, plus the baubles and stickers the quarantine facility gave us.

12/25/2020 World News Comments Off on Australians make the most of Christmas in hotel quarantine
Recent Posts
We and our partners use cookies on this site to improve our service, perform analytics, personalize advertising, measure advertising performance, and remember website preferences.Ok