New York: Babe Ruth has topped his own record.

The jersey — gray with YANKEES emblazoned across the chest — was one of more than 400 pieces of Ruth memorabilia supplied by his family and some collectors for the auction, which was held Saturday at Yankee Stadium. 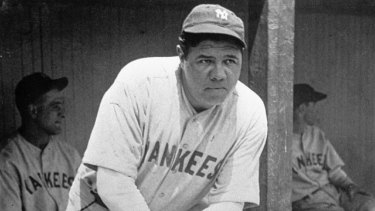 Babe Ruth pictured in 1929, wearing a jersey like the one that sold for $US5.6 million. Credit:AP

The seller of the jersey was anonymous, ABC News reported. The name of the buyer was not revealed.

"It's a superlative piece of American history, not just sports history," David Hunt, president of Hunt Auctions, said at the Stadium on Thursday. "It embodies everything about baseball history, about collecting, iconic people, pop culture, you name it."

The uniform, which was consigned by a collector, is unusual in having the word "YANKEES" across the front, the only era in franchise history in which that word appeared as part of the standard uniform.

The Yankees did not start wearing numbers on their backs until 1929. There is the faint outline – not visible to the naked eye – of a No. 3 on the back of the jersey, but it was removed at some point.

The bulk of the auction was consigned by the family and was announced in December by Ruth's grandchildren, Linda Ruth Tosetti and Tom Stevens.

Tosetti said at the time that she struggled with the decision but that younger generations were unable or unwilling to house the collection, so she opted to part with many items.

"Babe Ruth is a name that's going to be iconic long after all of us are gone, but the market is incredibly strong," Hunt said. "They were at a point in their lives where they decided, 'You know what, I just think the time is right.'"

Proceeds will go to the family itself as well as its charitable endeavours.

"Certainly Babe Ruth items are traded all the time, but to have personal items, notes, early photography, game-used pieces, awards, deer mounts, hunting trophies, you can only get them from one source," Hunt said.

Other items in the auction included a bat from the late 1920s with eight notches in it to commemorate home runs he it that was expected to sell for between $US700,000 to more than $US1 million.

There also are items from the 1934 tour of Japan by major leaguers, including an urn Ruth won for his batting exploits, as well as balls, letters and personal photos.

Hunt called Ruth "unequivocally" the most popular athlete in sports, and in sports collecting.

"To myself and to others in the industry, we truthfully had no idea that they had that archive of things," Hunt said. "They did a wonderful job keeping it quiet all those years for a lot of reasons, for security, personal reasons, what have you.

"It's really an important group of things, some of which have quite literally never been seen by the public before."