A rare white rhino that was born at Whipsnade Zoo after a 16-month pregnancy has begun to explore her enclosure just two weeks after her birth.

The female calf named Nandi, which means sweet one in Zulu, was born at the conservation zoo located near Dunstable in Bedfordshire, to mother Tuli and father Sizzle at 4am on August 21.

Today, heartwarming pictures emerged of the two-week-old animal exploring her surroundings for the first time as she stepped outside under the watchful eye of her mother. 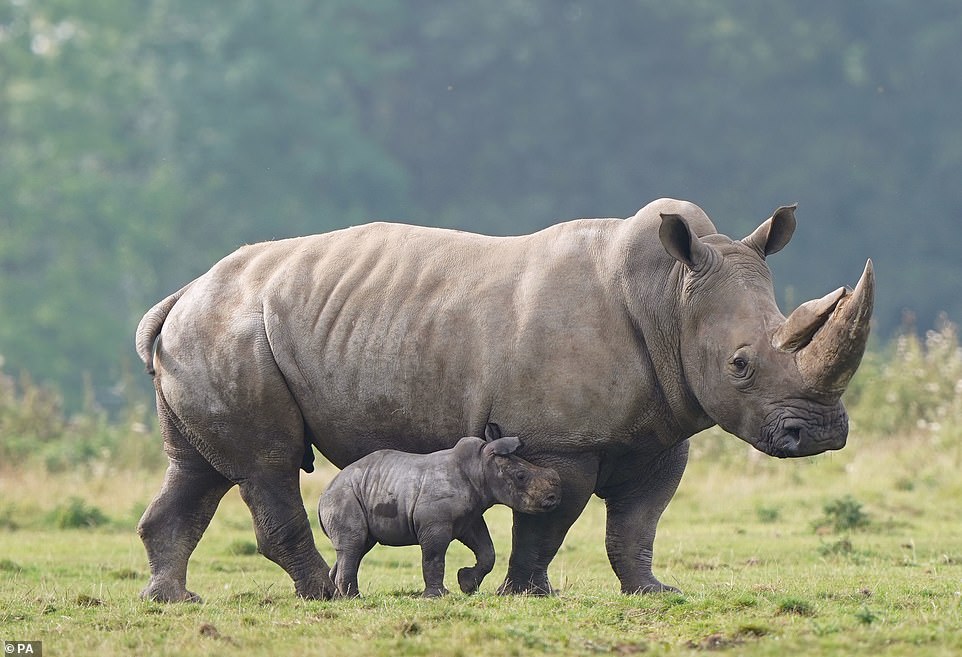 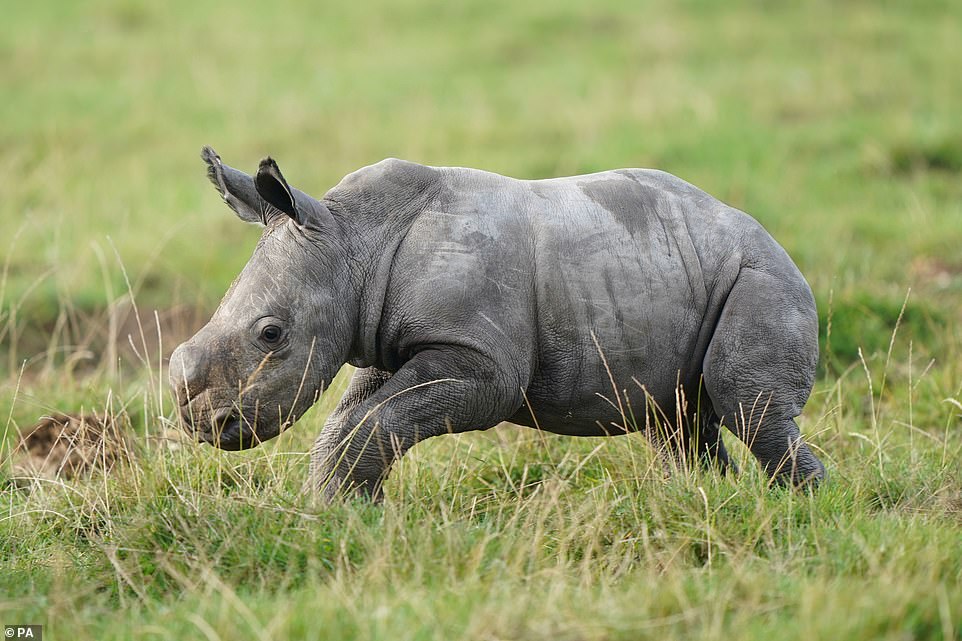 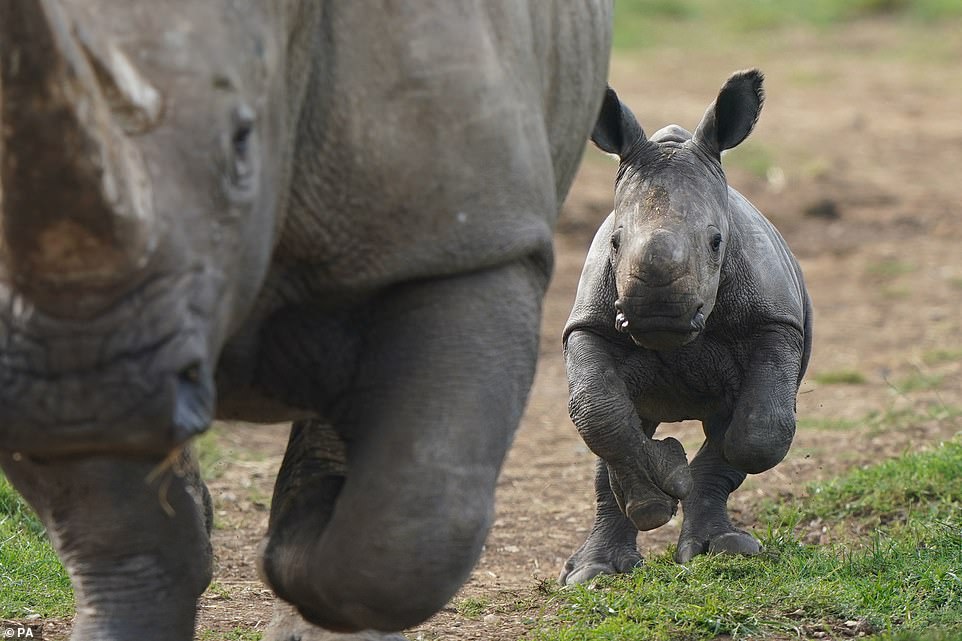 The female calf, who was born at the conservation zoo to mother Tuli and father Sizzle two weeks ago, runs through the enclosure

Mr Holden said: ‘We are overjoyed to be welcoming such a precious addition to our ‘crash’ of Southern white rhinos at ZSL Whipsnade Zoo.

‘Southern white rhinos are born with over-sized, rubbery feet, which they have to ‘grow into’, so Nandi is understandably wobbly when she walks.

‘Rhino calves spend most of their first week or two resting and drinking milk, but over the next few weeks she’ll grow, and as she does, she’ll get more playful, and confident in exploring her huge enclosure here.

‘Tuli is very protective right now, so we’re letting them rest away from the group and out of sight of visitors, but in a few days they’ll both start to feel more confident about Nandi venturing out and getting to know the rest of the herd.’

The calf was the second white rhino arrival at the safari park in Bewdley, Worcestershire, in the space of a few weeks.

Speaking at the time head of wildlife Angela Potter said: ‘We are delighted to welcome another new calf to our crash of southern white rhino.

‘It’s wonderful to see Keyah settling into motherhood so well, and she’s certainly going to be kept busy as her boy finds his feet.

‘Celebrating another rhino birth here at the park is a fantastic achievement, and further showcases the important role we have to play in being a part of the European Endangered Species Programme

‘Raising awareness of the vital conservation efforts needed to protect all five species of rhino in the wild, will always be the driving force behind our work here. 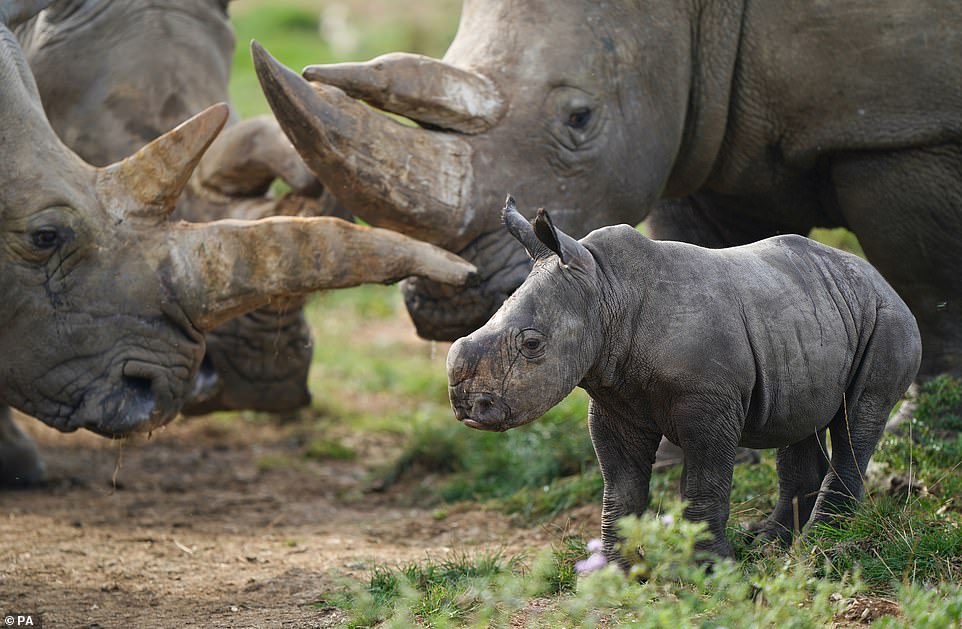 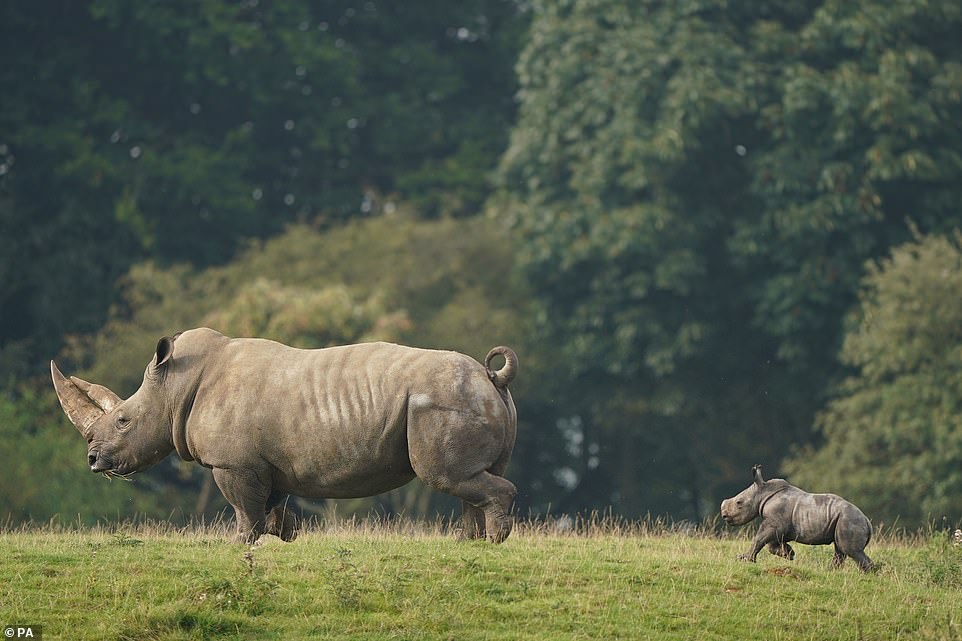 The baby rhino, who is being kept away from visitors at the moment, follows her mother in the enclosure as zookeepers keep watch 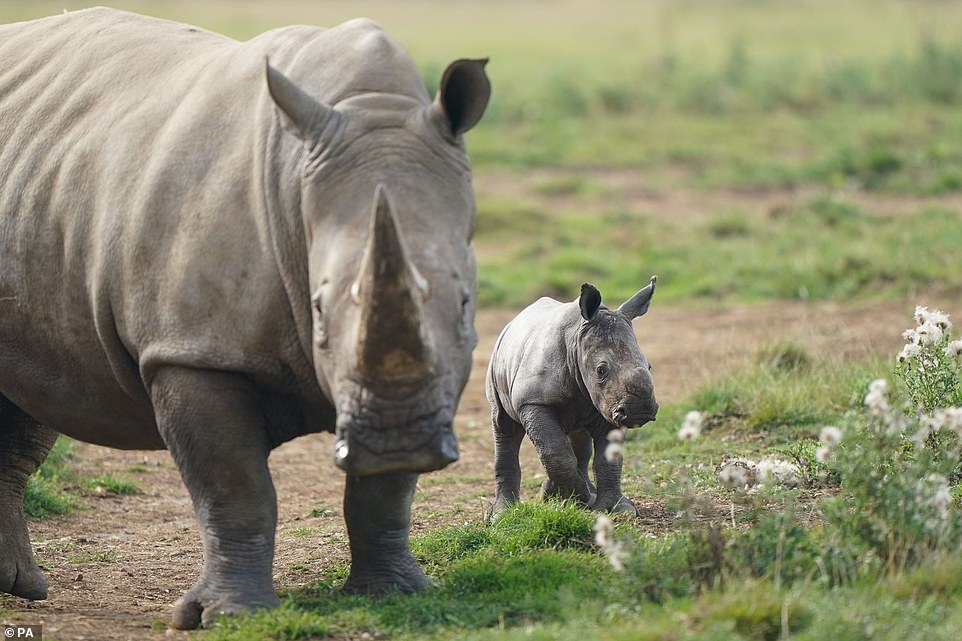 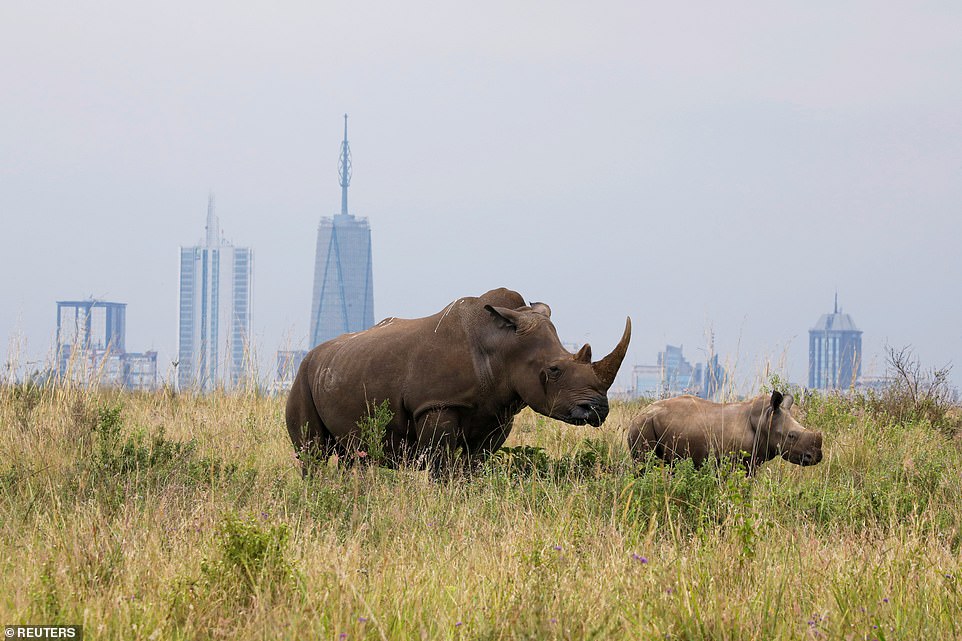 Rhino calves typically spend most of their first week or two resting and drinking milk but over the next few weeks Nandi will become more playful, according to staff at the zoo 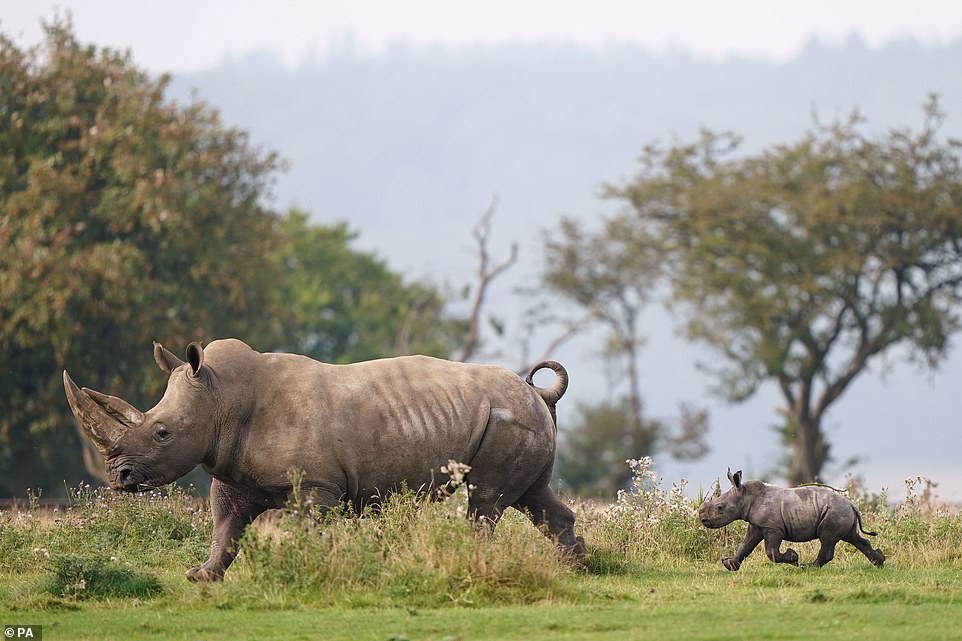 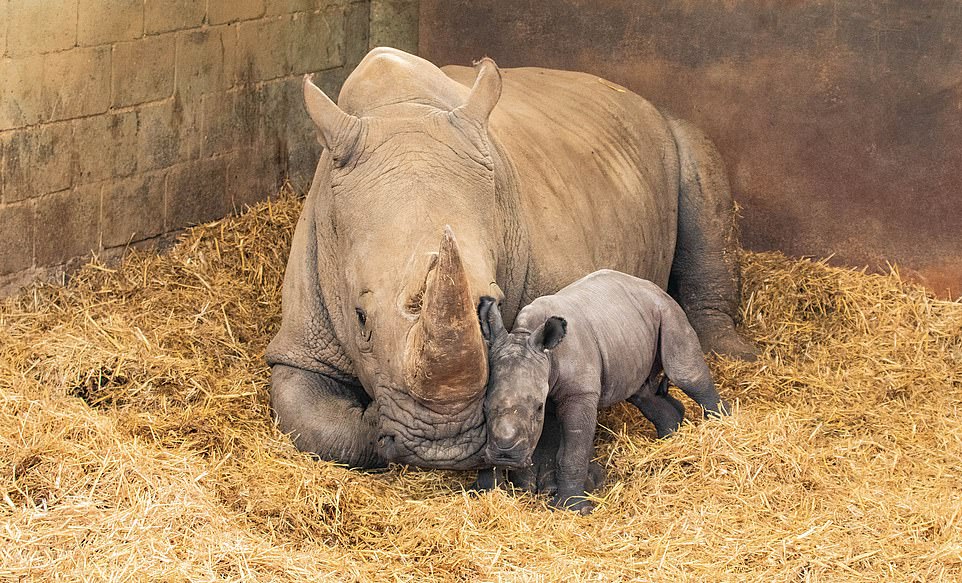 Nandi, which means sweet one in Zulu, was born at 4am on August 21 at ZSL Whipsnade Zoo to mother Tuli and father Sizzle

‘It’s also the first time we have had two calves born so closely together, so we can’t wait to watch them grow up as a pair, likely causing all sorts of mischief out on the safari.’

Last year, Kendi, the first white rhino born at the Animal Kingdom in Florida in 1999, gave birth to a male calf on October 25.

The rhino became the 11th white rhino born in the Florida attraction since it opened in 1998.

There are approximately 10,000 Southern white rhinos left in the wild, according to the IUCN Red List for Threatened Species.

However their numbers are in decline due to poaching, habitat loss, introduction of invasive species and climate change.

Both male and female white rhinos typically feature two horns, with the longest at the front, a broad square-shaped upper lip and a thick neck to support their head.

The males can weigh in at 2.3 tons while females are slightly lighter at 1.7 tons.

The ‘white’ in the animal’s name does not refer to their colour but in fact comes from the Afrikaans word ‘weit’ which means wide and refers to the animal’s mouth.