Residents in the Central West are picking up the pieces after a tornado ripped through the region on Thursday afternoon, while more storms have been predicted for parts of NSW.

Three people were injured and a number of properties damaged or destroyed when the rare tornado hit Clear Creek, north-east of Bathurst, and travelled along a 30-kilometre stretch in the area.

Farmer Scott McKinnon was in Meadow Flat, east of Bathurst, when the tornado tore the roof off his home and uprooted trees on his property.

He is now recovering in hospital after describing being “nearly sucked out” of his window during the freak storm.

“My feet ended up on the kitchen bench and my feet were hanging out the window,” he said on 2GB radio. “As I looked down I saw pine trees being whipped up in the air … then it spun up into two. It was unbelievably powerful.”

Bathurst deputy mayor Monica Morse said up to 10 properties were destroyed or damage in the wild storm.

She said the community was banding together to help those who lost everything in the tornado, with an online fundraiser created and a shop set up in Bathurst to source living essentials. 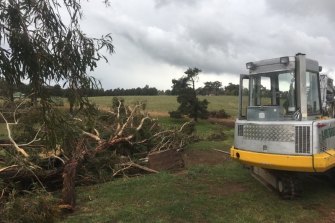 “Their houses are just matchsticks, it’s awful,” she said. “Everyone today is just working out what to do next.”

The Bureau of Meteorology said reports of damage stretched 25 to 30 kilometres, with the path running roughly north-west.

Agata Imielska, bureau manager for NSW and ACT, said at least some of that damage was due to a tornado occurring.

She said tornadoes in general were “pretty rare” and localised at an even smaller scale than thunderstorms.

“We generally need to see damage that’s associated with them and observe the actual tornado, that really aids in being able to say yes, we’ve definitely, actually seen a tornado,” Ms Imielska said.

“There are other types of really localised systems, like a microburst. These, like tornadoes, tend to be associated with severe thunderstorms and conditions that we see.” 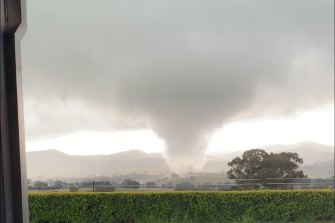 A tornado in Bathurst on Thursday afternoon. Credit:Severe Weather Australia

One man, believed to be aged in his 40s, was assessed for an arm injury after the tornado destroyed a property at Meadow Flat, near Lithgow. He was taken to Orange Hospital in a stable condition.

In Clear Creek, one male suffered cuts to his face while a female patient had sustained back and neck injuries. She was taken to Bathurst Hospital in a stable condition.

“It’s not every day you get called out to a tornado and this one packed quite a punch,” she said. 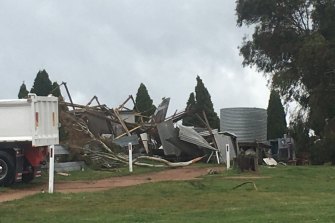 A man was injured after a tornado hit his property in Meadow Flat, near Lithgow.Credit:NSW Ambulance

In Sydney, hail stones of up to two centimetres in size were reported on Thursday afternoon in Castle Hill and Pennant Hills.

Thunderstorms redeveloped over Parramatta on Thursday night, moving towards the south-east.

Severe thunderstorms are again forecast to hit parts of the state on Friday, marking the third day of damaging storms. The bureau said there would be unsettled conditions, but storms were unlikely to be as “dramatic” as those that hit on Thursday.

Bureau of Meteorology forecaster David Wilke said severe thunderstorms are possible on Friday over the state’s north-east, including Sydney.

“The system that has brought pretty wild conditions over the past couple of days is still at play,” he said. “We still have that trough sitting over eastern NSW.

“There is still the risk we could see significant phenomena through the afternoon.”

Mr Wilke said the risk of severe thunderstorms would not ease until the trough moves offshore on Saturday.