Europe is braced for gale force winds and very heavy downpours over the next couple of days, after “violent” thunderstorms have hit the continent. BBC weather also warned of “large waves” for northwestern and western France during Friday. BBC weather presenter Tomasz Schafernaker said: “There’s been some pretty stormy weather in Europe in the last few days, last night in France, Germany, some violent thunderstorms. We’re also watching this storm developing out to sea, it’s heading to northwestern Iberia and will eventually impact parts of France over the next 24 to 48 hours.

“Gale force winds, damaging winds in fact, and some very heavy rain, and the remnants of that storm, Storm Miguel, will also affect parts of the British Isles.

“But Friday is looking fairly quiet around the eastern Mediterranean, a lot of sunshine across Turkey, Greece, the Greek islands, the Balkans after the recent storms quietening down a little bit.

“Fine for most of Spain and Portugal, not particularly warm, 22C in Madrid. Then we’ve got that stormy weather affecting northwestern and western France, so large waves and potentially disruption here during the course of Friday.

“In Scandinavia on the other hand it’s a heatwave right now, but looks as though in the coming days things will be eventually cooling off. 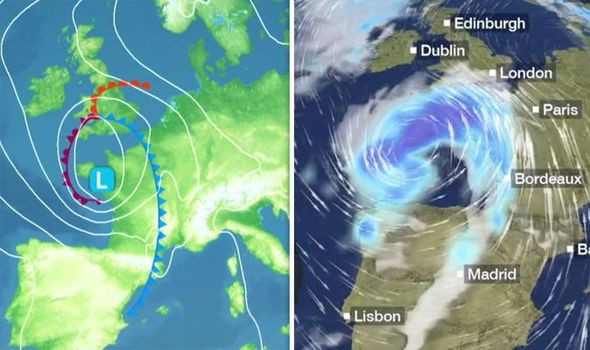 “This storm system will be sending much fresher conditions towards Norway and Sweden, but in Warsaw 29C on Saturday. So a hot one there.”

For the longer term forecast, the BBC weather host added: “Here’s the outlook for the next few days, as you can see Paris temperatures stabilise there a little bit, around 20C or so, there are some showers in the forecast.

“Madrid and Rome looking mostly on the sunny side. Warsaw however hot weather there, temperatures not far off 30C over the next few days.”

Meanwhile, for the UK, BBC weather has forecast strong winds to hit the UK as a powerful weather system moves across the continent towards Britain.

The low-pressure weather system is expected to crash into Britain on Friday bringing “torrential” rainfall and thunderstorms.

For Thursday evening and into Friday, BBC Weather forecaster Carol Kirkwood said: “By the second part of the night we will be importing some heavy rain coming up from the near continent, from France, moving across southern England in through central, southern England as well, and also in through parts of Wales. And it is going to be blustery around this.

“Into tomorrow that band of rain with high gusts will accompany it moving northwards eventually into parts of Northern Ireland and southern Scotland.

“Ahead of it for the north, we are looking at a mixture of bright spells and some showers, behind it some torrential thundery showers for southern England and south Wales, with the wind strengthening.

“Strong gusts along the channels, especially the Channel Islands, and English Channel coast.”

The BBC weather forecaster added that on Saturday the rain would continue to move northwards, leaving blustery conditions of up to 50mph behind.