‘He can one-syllable off!’: BBC’s Steph McGovern hits back at a viewer who sent in a complaint that she pronounced ‘here’ as two syllables

BBC Breakfast presenter Steph McGovern has hit back at a viewer who emailed her to tell her she was saying ‘here’ wrong.

The 37-year-old, who has recently announced she is expecting her first child, received an email from viewer ‘Trevor’ saying she was ‘mangling’ the English language, by pronouncing the word ‘here’ as two syllables.

The upset viewer said the business reporter from Middlesbrough does a ‘very good job’ and assured her that her accent ‘doesn’t bother me apart from one word’.

He criticised her for pronouncing ‘here’ as two syllables – ‘he-yah’ – instead of one. 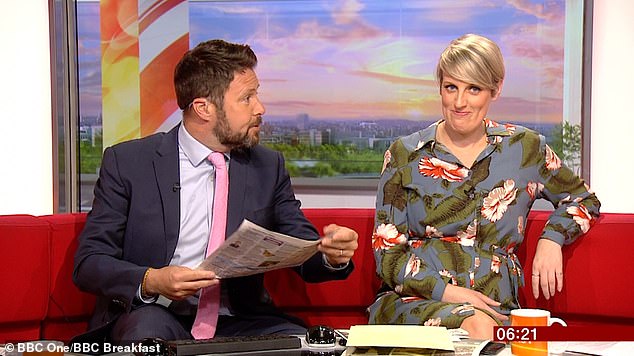 Steph had been on the show alongside Jon Kay and was taking about her pregnancy, revealing she was no longer with ‘pot belly’ 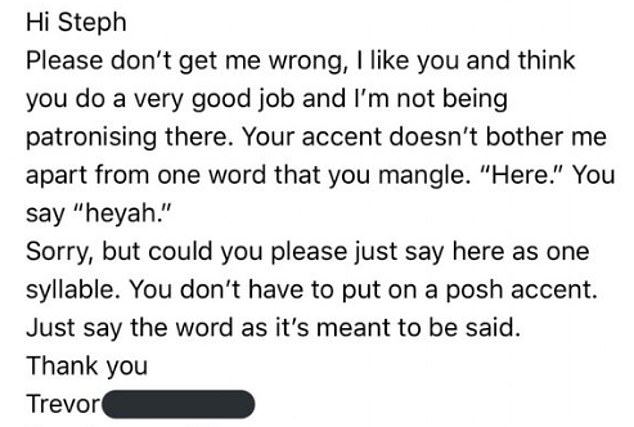 But Steph hit back by posting a screenshot of his complaint on Twitter – and telling him to ‘one syllable off’.

She said: ‘This email has really made me laugh.

‘Two thoughts: Can anyone say the word ‘here’ with one syllable? Try it. I’m curious.

‘Despite what Trev thinks, how I say the word ‘here’ IS all about my accent so he can one syllable off.’

‘Please don’t get me wrong, I like you and think you do a very good job and I’m not being patronising there.

‘Your accent doesn’t bother me apart from one word that you mangle.

‘Here’. You say ‘heyah’. Sorry, but could you please just say here as one syllable.

‘You don’t have to put on a posh accent. Just say the word as it’s meant to be said. 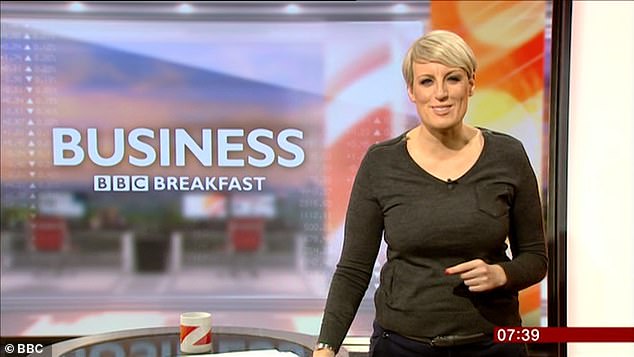 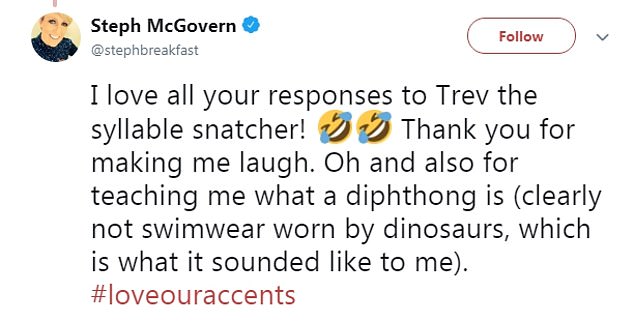 After receiving support from many viewers, Steph thanked all her fans and branded Trevor a ‘syllable snatcher’

One said unless the email was from Sir Trevor McDonald then she should ignore it. While another added that Steph was ‘one of the only people on my telly that speaks properly’.

Others said it was a diphthong – a sound formed by the combination of two vowels in a single syllable – which Steph said sounded like ‘swimwear worn by dinosaurs’.

Another added: ‘As someone who was told after graduation that she’d never get a job because of her frightful Tees Valley accent, I have reached the point in my life where people like Trevor can get in the bin.’

Some Twitter users even commented on how ‘refreshing’ it was to hear a northern accent on TV.