The Australian government has been urged to create a new human rights commissioner for foreign interference and send dedicated Home Affairs liaison officers into the Chinese community to counter Communist Party interference.

The recommendations from think-tank China Matters, which has a board that includes former Australian ambassador Stephen FitzGerald and Paul Keating's foreign policy advisor Allan Gyngell, follows a dispute between the two countries over foreign interference, intelligence raids and the treatment of journalists in both countries. 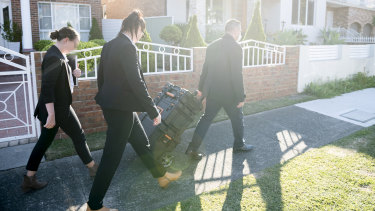 Evidence is taken out of NSW Labor Minister Shaoquett Moselmane’s property in Rockdale after raids by ASIO as part of investigation into possible links to the Chinese Communist Party.Credit:Rhett Wyman

China Matters program director Dirk van der Kley said the Chinese Communist Party was intimidating members of the local Chinese community through threats to their families and economic coercion, but the federal government was unable to measure how well its counter-foreign interference policy was working in the local community.

"The diaspora is much larger now and the Chinese government is much more powerful and because we have actually changed the laws, we need to see if these efforts are working," he said.

"You have a situation in Australia where people are not able to express themselves. We just don't have a clear sense from the victims perspective if things are changing. People of Chinese heritage should be able to speak freely, whatever side they are on," he said.

Dr van der Kley said the establishment of a foreign interference commissioner that members of the Chinese community could contact about pressure from the Chinese government and dedicated liaison officers would enable authorities to track influence across the diaspora.

At the moment, community liaison officers from Home Affairs and state police have a broad remit and also handle relations with the Chinese government's United Front propaganda groups and the Chinese embassy, which can accidently create mistrust, he said.

A spokesperson from the Department of Home Affairs said the government had spent $126 million on foreign interference measures and worked with 2000 different multicultural community groups to develop a nuanced understanding of community sensitivities.

The spokesperson said the department was recruiting more community liaison officers with dual language skills to engage with communities at a grassroots level.

"It is important to distinguish between foreign influence and interference. All governments, including Australia’s, try to influence deliberations on issues of importance to them," the spokesperson said.

"Interference involves coercive, clandestine, deceptive or corrupting activities undertaken by, or on behalf of a foreign actor, and which are contrary to Australia’s sovereignty, values and national interests."

Dr van der Kley said establishing an encrypted national security hotline was critical to ensure the safety of community whistleblowers providing politically sensitive information. He said media organisations owned by foreign governments operating in Australia should have to identify government-ownership in their content.

Home Affairs Minister Peter Dutton has raised concerns about the actions of some Chinese state media in Australia after ASIO raided the properties of four Chinese journalists in June in connection to an alleged plot to influence Australian politics. The raids came months before Australian reporters Michael Smith and Bill Birtles were forced to leave Beijing in what security experts have described as a "tit-for-tat" escalation.

"If they're [journalists] here providing a slanted view to a particular community, then we have concern with that," Mr Dutton told the ABC on Sunday. "If there's attempts with interfering or conducting espionage-type activities, then we have a problem with that."

"Almost all major policy decisions at a federal level have gone against the [Chinese government]. For a country that is so intrinsically linked to Australia’s economic wellbeing, it has little policy influence."

But this characterisation was rejected by Alex Joske, a China influence researcher at the Australian Strategic Policy Institute.

“Some of the conclusions are really premature – for example the description of how the United Front Work Department failed to influence politics," he said.

"The United Front has failed in the past couple of years, but that neglects the decades of uncritical friendship between Australia and China where there was little awareness or concern in Australian politics about CCP influence and foreign interference."

Mr Joske said the proposal for a commissioner was an "interesting idea" and the Australian government needed more experts in Chinese Communist Party influence working on foreign interference.

"I definitely agree there needs to be more outreach but it is unclear how a commissioner within the Human Rights Commission would be suited to that," he said.

Australian security agencies have been looking to increase their outreach with Chinese-Australians in recent years.

Prior to foreign interference coming into the spotlight from around 2015, state and federal agencies did have the extensive links into the Chinese diaspora that they had with other ethnic communities.