Many leaders were shocked at America’s disastrous abandonment of Afghanistan. One who was not? China’s President Xi Jinping.

He has long been convinced of the inevitability of US decline and Chinese ascendancy: “The East is rising,” he likes to say, “and the West is declining.” He is setting China up to be the world’s leading power and he’s well on the way. 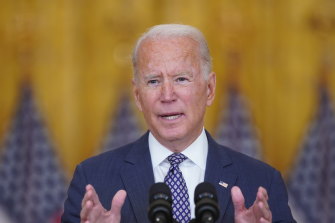 Joe Biden’s Afghanistan pull-out could have made his job more difficult elsewhere in the world.Credit:Bloomberg

And that is exactly why US President Joe Biden says he is walking away from Afghanistan. Biden says he’s withdrawing from the Middle East to concentrate American energy on China.

In announcing the withdrawal, Biden said: “The US cannot afford to remain tethered to policies creating a response to a world as it was 20 years ago. We need to meet the threats where they are today.”

Chief among them is China, and Biden was explicit: “We also need to focus on shoring up America’s core strengths to meet the strategic competition with China and other nations that is really going to determine our future.” America was engaged with China “in a competition for the 21st century”, Biden has said repeatedly.

Afghanistan, like Iraq, was just baggage, Biden decided. But in choosing to give up on Afghanistan in order to confront China, Biden has actually undercut America’s position everywhere.

His administration’s epic incompetence in Afghanistan vindicates Xi’s view as published in February: “The biggest source of chaos in the present-day world is the US.”

The Chinese Communist Party’s hyper-nationalist Global Times taunted America over the fall of Kabul. It raised the spectre of another humiliation for the US if it were to try to defend the self-ruled island of Taiwan against invasion from the Chinese mainland: “Is this some kind of omen of Taiwan’s future fate?”

But the gleeful barbs of America’s rivals are nothing compared with the heartfelt grieving for US credibility among America’s strategic eminences and allies.

The retired US admiral and former Supreme Commander of NATO, James Stavridis, said last week: “We are watching the haemorrhaging of American honour.”

Former British Labor prime minister and staunch US defender Tony Blair described the pullout as “imbecilic”. The leading candidate to succeed Angela Merkel as German Chancellor, Armin Laschet, said it was “the greatest debacle that NATO has experienced since its foundation”. 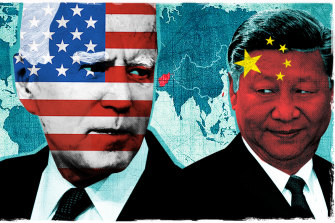 According to Australia’s foreign affairs minister under John Howard, Alexander Downer, “America has no patience and no resilience”. “We are entitled to doubt the determination of an American administration to support its allies through thick and thin,” he wrote in Monday’s Financial Review. Its “shameful withdrawal” had “left my faith badly shaken”.

America’s best friends and closest allies are now plunged into a crisis of confidence. And its greatest rivals are much encouraged. We’ve seen it before. It didn’t go well.

We know that US weakness in the Middle East invites Chinese and Russian aggression in Asia and Europe. Because that’s exactly what happened under Barack Obama.

Obama showed American spinelessness in Syria when he declared in 2012 a “red line” that he failed to enforce in 2013. This emboldened Vladimir Putin and Xi Jinping to lunge for territory claimed by their neighbours.

They were huge gambles against US power and credibility. They turned out to be winning bets.

“I remember talking to Obama about it at the time,” says the then Australian prime minister, Kevin Rudd. Obama had twice phoned Rudd to ask that Australia call for a tough US response when the notorious Syrian dictator Bashar al-Assad fired chemical weapons on his people. Obama had made the same request of Canada’s Stephen Harper.

Australia and Canada did as Obama had asked. But then nothing happened. “Both Canadian prime minister Harper and myself were left swinging in the breeze,” Rudd wrote in his memoir.

Rudd tells me: “Obama went for a walk in the Rose Garden and changed his mind. It’s accurate to say that when China and Russia observed Obama’s response to the enforcement of Syrian red lines, Beijing and Moscow concluded Obama was trigger-shy.

“Two things happened. Putin felt emboldened to occupy Crimea and launch an assault on Eastern Ukraine in 2014”, where fighting continues to this day. The estimated death toll to date is more than 13,000.

“Second, Xi Jinping’s campaign of island reclamation in the South China Sea was intensified in 2014-15,” recounts Rudd. Beijing’s forces seized maritime territories claimed by its neighbours. The independent tribunal in The Hague ruled China had no right to the territories. Beijing has since fortified them with air force and missile bases regardless.

Is history about to repeat? Rudd, an international authority on China and president of the Asia Society, warns that Biden’s Afghanistan botch-up will excite new territorial ambitions in Beijing: “In China there will certainly be an argument advanced that this represents a level of strategic softness in Washington and it should be exploited.”

Would Xi’s forces meet the same response from Biden as they did from Obama – that is, nothing? Rudd says that any new aggression by Beijing could prove “genuinely dangerous”.

Why? “Because the Biden administration is fully aware of what went wrong in 2014-15” – Biden was Obama’s vice-president – “and the strategic dynamic with Beijing is now front and centre, unlike seven years ago. So if China were to act, there’s a real risk to Beijing that the US would respond with real force to dispel the 2013-14 thesis” of American spinelessness, says Rudd.

“The Chinese people will absolutely not allow any foreign force to bully, oppress or enslave us and anyone who attempts to do so will face broken heads and bloodshed in front of the iron Great Wall of the 1.4 billion Chinese people,” he said last month celebrating the Chinese Communist Party’s centenary.

An America smarting from humiliation and a China swaggering with hubris. What could possibly go wrong?