Boost for over-stretched vicars as retired City staff, police and teachers are fast-tracked into clergy career

Retired City workers, head teachers and police officers are being fast-tracked into the clergy to help rural churches and overstretched vicars in a new scheme.

The ‘Caleb Stream’ project aims to find new priests for parishes from retired people within their congregations.

Those aged over 55 are not usually put forward for ordination as the retirement age for clergy is 70 and the selection and training process can take up to five years.

But the Caleb Stream, which is named after the biblical figure who still felt strong enough to prove his worth at 85, has reduced this to a single year.

It is hoped that up to 8,000 Church of England worshippers – particularly those with managerial experience who have served as church wardens or lay ministers – could be trained as priests after retirement. They will be ‘self-supporting’ and won’t be paid a stipend nor need a vicarage as they already live locally. 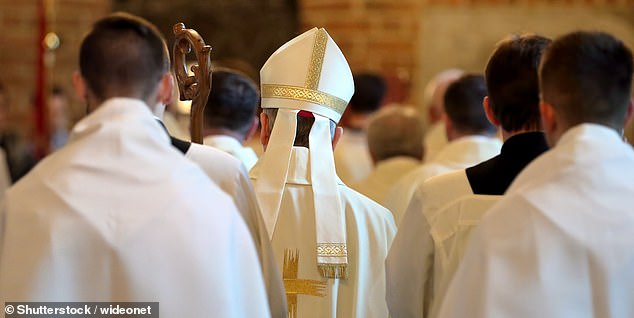 Retired City workers, head teachers and police officers are being fast-tracked into the clergy to help rural churches and overstretched vicars in a new scheme (stock image)

A 67-year-old former partner at a consulting firm has already been ordained while ten others, including a former boarding school headmistress and a retired police constable, are in training.

Thousands of churches no longer have their own dedicated priest, with some vicars overseeing 20 or more parishes.

It is hoped that restoring a system of ‘one-priest-per-church’ will boost congregations by forming closer relationships between communities and their vicars.

The Rev Nicky Gumbel, 67, who is stepping down after 17 years as vicar of Holy Trinity, Brompton, in west London, is championing the Caleb Stream.

He told The Times there were about half a million Anglican churchgoers aged between 55 and 72. ‘They’ve been involved in church all their life, some are licensed lay ministers, lay chaplains, church wardens, some are just dedicated church people,’ he said.

‘How hard would it be to find 8,000 who would give 25 years for free after they’ve left life in the City or police force?’

A curate at his parish in West Sussex, he spent 20 years working for ICI and four years as a partner at Accenture.

He said: ‘Most people at 60 have a lot of life experience, a lot of professional experience – possibly in leadership roles, and hopefully have a good track record of Christian ministry.’