No retreat on our sausages: Boris Johnson risks an EU trade war as he vows to protect Ulster chilled meat exports

Boris Johnson will press ahead with unilateral action to ensure British sausages continue to be sold in Northern Ireland – despite warnings of an EU trade war.

A Whitehall source said the Prime Minister had ‘no alternative’ but to intervene to block Brussels rules that would ban firms in Great Britain sending chilled meat products to Ulster.

The move puts him on collision course with Emmanuel Macron, Angela Merkel and EU chief Ursula von der Leyen, whom he will meet for separate talks at the G7 summit in Cornwall today. Mr Johnson yesterday said the EU’s approach to implementing the Northern Ireland Protocol was ‘excessively burdensome’.

Ministers fear traders face a complete ban when a ‘grace period’ expires at the end of this month. After months of talks, Mr Johnson is ready to extend the grace period within days, probably until at least the end of the year. A Whitehall source said the PM believed it was ‘unacceptable’ for firms to be barred from trading within the UK’s internal market. 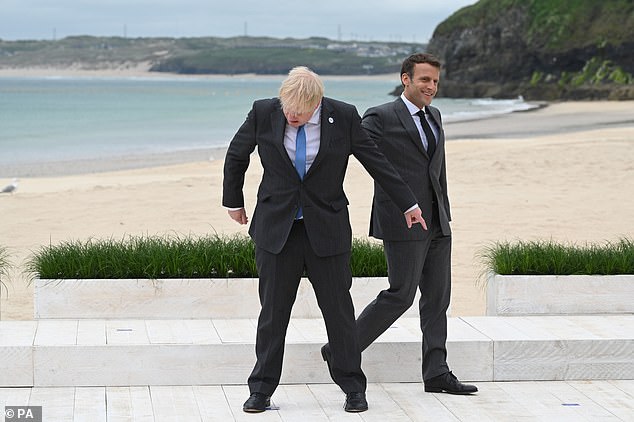 The source added: ‘Given the EU’s position on this I cannot see any alternative to taking unilateral action.’ The PM’s official spokesman said Mr Johnson would rather see a negotiated settlement, but warned that ‘all options are on the table’.

No 10 also rejected an EU ‘compromise’ proposal for Britain to accept ongoing alignment with Brussels rules on the grounds it would make it impossible to strike ambitious trade deals. European leaders have warned this week that unilateral action would lead to retaliatory measures, including tariffs and quotas. The row is set to dominate the PM’s meetings with Mr Macron, Mrs Merkel and Mrs von der Leyen today.

The three leaders appeared to be co-ordinating their response yesterday when they held an impromptu get-together with Italian PM Mario Draghi and European Council chief Charles Michel at the Carbis Bay resort where the summit is being held. Mr Macron tweeted in a pointed remark: ‘As always, the same union, the same determination to act, the same enthusiasm.’ He has already been accused of ‘posturing’ after warning the UK that ‘nothing is renegotiable’.

But last night there were signs the EU was backing down over its threats to escalate the crisis.

Irish broadcaster RTE quoted an EU source suggesting the bloc could now take a softly-softly approach for fear of falling into the ‘trap’ of inflaming tensions in the Province as the Unionist ‘marching season’ reaches its climax. 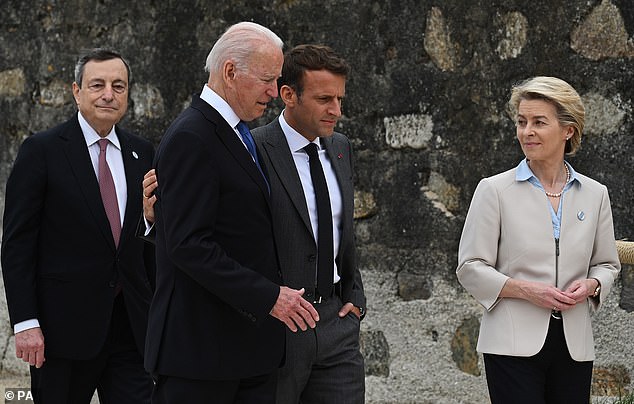 The move puts him on collision course with Emmanuel Macron (second from right), Angela Merkel and EU chief Ursula von der Leyen (right), whom he will meet for separate talks at the G7 summit in Cornwall today (pictured: Italian Prime Minister Mario Draghi, left, and Joe Biden, second from left)

The source said: ‘The EU doesn’t want to get sucked into the stupid sausage war type narrative, where we would be seen to be coming on heavy because of things like chilled meat, sausages etc.’ EU leaders hope that US President Joe Biden will pressure the PM to back down in order to avoid increasing tensions in Northern Ireland.

But No 10 said the US President was in ‘complete harmony’ with the PM after talks on Thursday.

Mr Johnson yesterday revealed he had given Mr Biden details of the disproportionate checks being imposed by the EU on goods traded from Britain to Northern Ireland.

He told the BBC: ‘Twenty per cent of the checks conducted across the whole of the perimeter of the EU are now done in Northern Ireland, three times as many as happen in Rotterdam.’ He added: ‘There are ways of enforcing the protocol, ways of making it work that may be excessively burdensome.’ The PM insisted it would be possible to ‘sort out’ the issues. But officials are pessimistic about an immediate breakthrough.

The dispute arises out of provisions in the Brexit deal that leave Northern Ireland within the EU’s single market for goods. Mr Johnson accuses Brussels of taking a ‘purist’ approach to the deal and applying it to all goods crossing the Irish Sea, regardless of whether or not they are set to enter the EU.