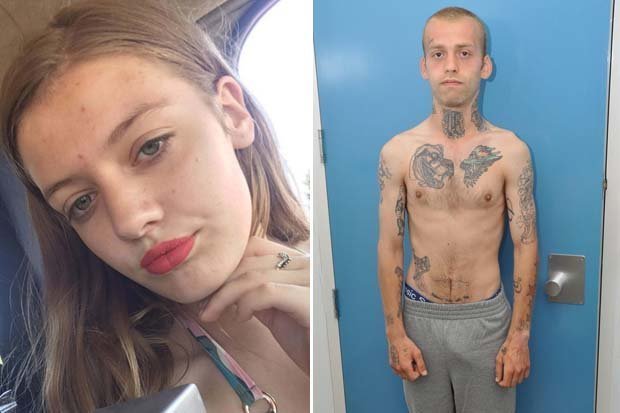 Stephen Nicholson, 25, raped the schoolgirl three times, who he had a secret-year-long relationship with, before stabbing her to death in July last year.

He had repeatedly stabbed Lucy 27 times – including three times in the neck – to death in a “vicious” attack in woodland near Southampton Sports Centre.

The jury found Nicholson guilty of murder and three charges of rape today after hearing how he had “an interest in under-age sex” and exploited the “vulnerable” youngster.

He was also convicted of sexual activity with a 14-year-old girl in 2012, who he had taken to the same woodland where Lucy was found dead years later.

The court heard how care worker Nicholson had worked with Lucy’s mother Stacey White and moved into the family home in 2017.

He first raped Lucy, aged 12 at the time, in May of that year and on two further occasions over the coming months.

The trial heard Lucy would later describe him to friends as her “boyfriend”.

Nicholson was cleared of one count of sexual activity with a child, relating to Lucy after she had turned 13.

During the trial, Nicholson told Winchester Crown Court that Lucy was “stalkerish”.

Following his arrest two days after Lucy was killed, he said in a police interview: “Lucy was really stalkerish, my work rotas she would go through them to find out when I was finishing.

“I woke up to her standing over me, she would sit on my lap, I would be stood by the kitchen side making a roll-up and Lucy would come and stand literally right up against me and pressing against me.”

He added: “She wouldn’t leave me alone. I physically had to lock myself in my room.”

Nicholson also claimed: “I received a message from Lucy on Facebook saying that she was going to tell her mum she was pregnant and I had done it unless I met her at Mansel Park.

“She was just making stuff up, trying to cause trouble, it was just nonsense. From my memory, I put something back like ‘Yeah, whatever’.”