We can look forward to a winter of delicious pies and crumbles – thanks to a bumper apple crop this year.

A lack of late frosts combined with a largely warm and settled spring resulted in a prolonged blossom season for orchards, say gardeners from the National Trust.

This was followed by rain in July and August, which helped the fruit to swell.

The harvest is taking place slightly earlier than usual as the warm spring helped pollinators such as honeybees to fertilise the flowers. 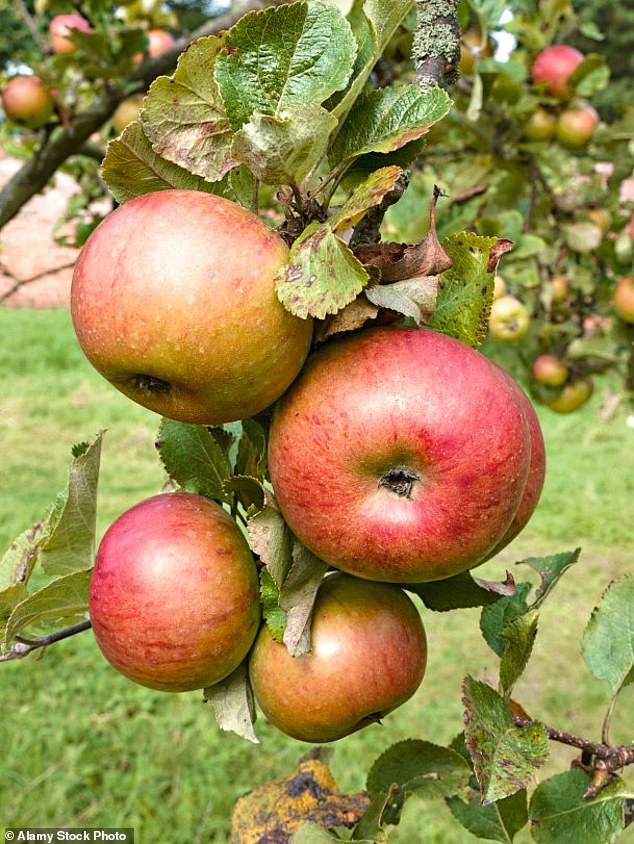 Bumper apple crop means we can look forward to a winter of delicious pies. The majority of the 200 National Trust orchards report a very good harvest this year (stock image)

More than 200 traditional apple orchards are managed by the National Trust, with the majority reporting a very good harvest, the charity said.

Nick Fraser, head gardener at Nunnington Hall in North Yorkshire, said: ‘Generally we do get quite a good crop, but I’d say this year is our best for at least three years.

‘We care for over 25 varieties of apples here including Dog’s Snout – a variety which is slightly pointed, and looks like a dog’s face; the Ribston Pippin and Yorkshire Beauty.

‘Thanks to the warm spring, no late frosts and period of very settled weather we found that pollinators such as bees had excellent conditions to fertilise the flowers to form the fruit.

‘We purposefully keep the grass long under the trees from the spring to late summer so that wildflowers such as cowslips and cuckoo flowers can help attract the bees, butterflies, wasps and hoverflies which all help pollinate the fruit.’

His gardeners, who care for more than 25 varieties including Dog’s Snout and Yorkshire Beauty, keep the grass long under the trees from the spring to late summer, so wildflowers such as cowslips and cuckoo flowers can help attract pollinators.

The orchard at Cotehele in Cornwall will invite visitors to pick their own this year so fruit does not go to waste.

David Bouch, head gardener, said: ‘Since we planted the orchard we have been keeping annual records to record how the harvest performs.

‘This year is certainly an excellent rather than a bumper year, due to the apple trees being biennial and last year being an exceptional year.

‘While still young, the crops are increasing year on year as the trees mature.

‘As the trees continue to grow we are expecting cropping to increase year on year, but we are always subject to the weather.

‘Thankfully being this far south we don’t typically have frosts after April, but mild winters bringing on early blossom can sometimes catch us out.’

An unexpected frost in mid-May affected blossom in the 22 acres of orchards at Ardress in County Armagh, Northern Ireland. 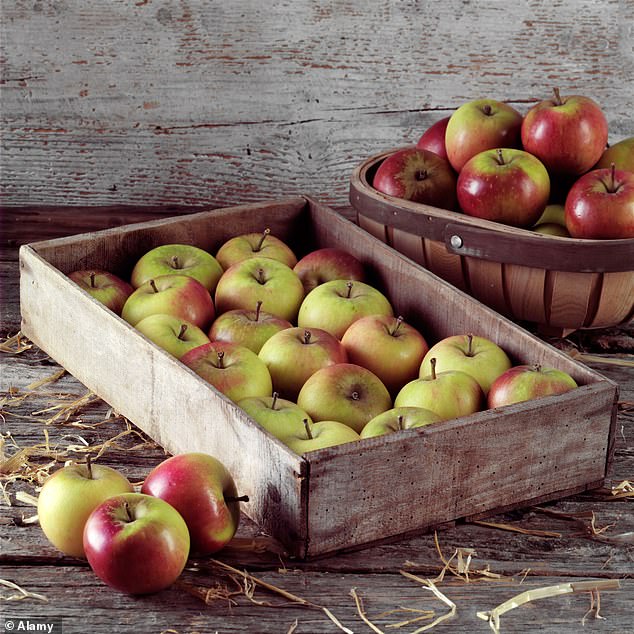 Gardeners say a warm, settled spring resulted in a prolonged blossom season followed by rain in July and August, which helped the fruit to swell (stock image)

However, the 2,000 apple trees produced a second bloom to save the season.

National Trust tenant farmer and cider maker Greg MacNeice said: ‘We had an abundance of apple blossom back in early May which normally would have indicated that we’d be harvesting a bumper crop of apples.

‘However, in mid-May Northern Ireland recorded its lowest ever May temperature at minus 6.1C.

‘In the low-lying parts of our orchards, the frost descended with the cold air flowing downhill much like water, collecting and pooling in the valleys and behind dense hedgerows, killing off lots of delicate blooms from our early varieties and turning them black.

‘But our trees are nothing if not resilient and they found a way through by producing a second lot of bloom.

‘This ‘late bloom’ has produced apples which are smaller than normal and irregular in shape, but will nonetheless help us produce an excellent cider.’

Mr MacNeice said the crop was anticipated to be about 75% of a normal year, which was still a ‘great result’ considering the late frost.