Toronto: Canada’s vaccination rate has passed the United States, overcoming a sluggish start that had left it lagging its southern neighbour.

More than 49 per cent of eligible Canadians are fully vaccinated, and 70 per cent had at least one dose as of Saturday, making it the world leader in first doses of COVID-19, according to the most recent figures available through the Our World In Data project. 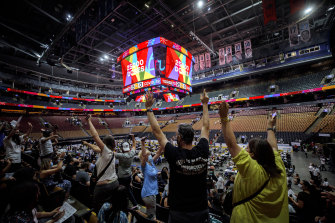 Vaccine recipients at Scotiabank Arena, Toronto, cheer for giveaways as the number of doses administered reaches 25,000. The venue went on to set a North American record of 26,771 jabs in a day. Credit:AP

In the US, where vaccinations are plateauing in some regions, 48.5 per cent of the population is fully inoculated and about 55.5 per cent have received at least one dose.

The European Union has also been catching up to the United States after lagging far behind until recently, with 55.7 per cent of its citizens at least partly vaccinated. The EU’s rate of fully vaccinated citizens is less than 43 per cent.

As vaccinations even out in many Western countries, wealthy nations are leaving the rest of the world far behind. Only about 1 per cent of people in low-income countries are even partly vaccinated, according to Our World In Data.

After steady growth through the winter and spring, the pace of US vaccinations has remained relatively flat. President Joe Biden, in a renewed push, called last week for employers to set up clinics at work and offer paid time off for workers.

Vaccinations have slowed in the United States as concerns have grown over the spread of the highly contagious delta virus variant. After a sharp drop in virus cases, the average number of new daily cases across the United States seems to have levelled off, although they remain a fraction of their peak. Outbreaks have erupted in some parts of Texas, Arkansas and Missouri. 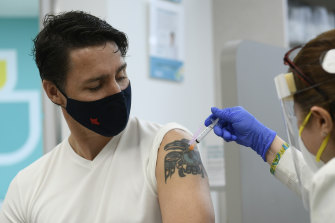 Prime Minister Justin Trudeau receives his second dose of COVID-19 vaccine from a pharmacist in Ottawa earlier this month. Credit:AP

In Canada, while many of the jabs have taken place quietly at pharmacies, the health push has also been promoted via public mass vaccinations in sporting stadiums. At Toronto’s Scotiabank Arena, home to the Raptors basketball and Maple Leafs ice hockey teams, the newly vaccinated cheered from the stands on June 27 as the venue hit a North American record of 26,771 doses in one day.

Rapid progress in the vaccine campaign – Canada had fully vaccinated only 3 per cent of its population as of the middle of May – is paving the way for Prime Minister Justin Trudeau’s government to relax travel restrictions on the eve of a likely election campaign.

Last week, Prime Minister Justin Trudeau signalled that the country could be ready to accept fully vaccinated US citizens and permanent residents across its border for nonessential travel as of mid-August.

Trudeau also said Canada could open to fully vaccinated travellers across the world by early September if conditions continue improving.

Canada’s vaccination rate has revved up after supply disruptions marred the early rollout, leading to a drop in Trudeau’s public approval ratings in February.

After an early start, production issues at Pfizer and Moderna led to reduced shipments in the northern winter — including some weeks in which no vaccine doses arrived at all.

Experts said Canada’s start was always going to be sluggish because of several key factors, notably its decision last year to spread its 414 million orders among seven different companies to reduce risk rather than bet on a single vaccine in exchange for early delivery. And Canada faced inherent disadvantages, too: primarily the lack of an established vaccine producer with headquarters in the country and its relatively limited production capacity to make the vaccines developed by foreign companies.

In their efforts to get as many first jabs into arms as possible, health authorities set aside Pfizer’s clinical guidance of a three week gap between the first and second dose of its vaccine, stretching the gap out to as long as four months. Canada also broke with orthodoxy by advising citizens they could “mix and match” their first and second vaccine doses, whether AstraZeneca, Pfizer or Moderna.

Throughout the inoculation program, surveys have shown greater willingness among Canadians than Americans to get jabbed, perhaps because of an overall greater trust in government and public health authorities.

Canada’s northern Yukon and Northwest Territories are leading the country with the highest proportion of fully vaccinated residents, at more than 59 per cent, with two Atlantic provinces, Newfoundland and Labrador, and Prince Edward Island, lagging the others at about 30 per cent, according to data from Canada’s public health agency.

Although vaccinations are ramping up faster now in Canada than in the US, Canada’s slower start has placed it behind the US in reopening its economy. Canada’s lockdowns were also generally stricter and longer-lasting. In Ontario, movie theatres, indoor dining and certain other indoor activities were allowed to open on Friday after being closed for months.

Canada’s economy is projected to grow 6.2 per cent this year, compared to 6.6 per cent US growth.

07/19/2021 World News Comments Off on Cheering for Canada: how a vaccine laggard became a world jab leader
Recent Posts