Uighurs are treated “worse than dogs” in Chinese camps in Xinjiang, a new “people’s tribunal” into their treatment has heard.

The independent tribunal, which is being held in London, has been set up to assess whether China’s alleged human rights abuses against Uighur people constitute genocide.

It does not have the backing of the UK government and has no powers to sanction China, but organisers hope the evidence heard will compel the international community to take action. An estimated one million people, most of them Uighurs – a Muslim ethnic group living largely in the northwest Chinese province of Xinjiang – are thought to have been detained inside “re-education camps” in recent years.

The first witness to give evidence on day one of the hearing was Qelbinur Sidik, a woman employed to teach Mandarin language classes at a men’s camp in Xinjiang in 2016.

“Guards in the camp did not treat the prisoners as human beings. They were treated less than dogs,” she said through an interpreter.

“The things that I have witnessed and experienced, I can’t forget.”

Other witnesses due to give evidence over the next four days include a woman who says she was forced into an abortion at six months pregnant and a former detainee who claims he was “tortured day and night” by Chinese soldiers inside one of the camps.

China has consistently denied claims of human rights abuses and says the camps were designed to offer Chinese language lessons and job support, as well as combat religious extremism.

It comes after China experienced a wave of Xinjiang-related terror attacks in 2016.

Although the UK government has declined to get involved, MPs passed a motion in April that declared the Uighur people are being subjected to genocide. 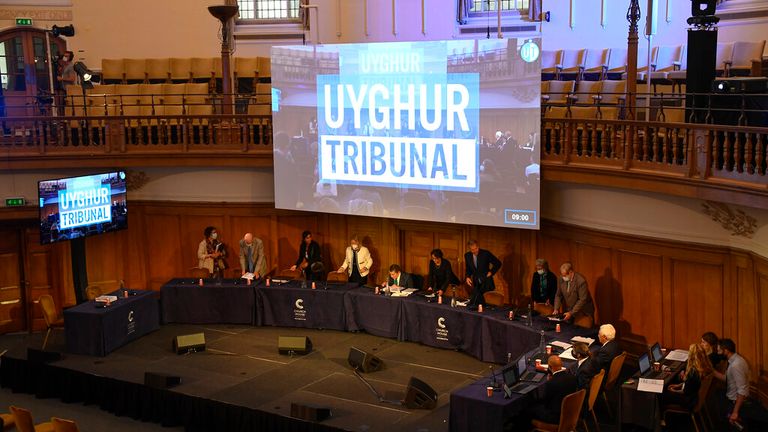 Leaders in the US, Canada and the Netherlands have made similar declarations.

Prime Minister Boris Johnson has said, however, that the issue of genocide is one for the courts.

The Chinese embassy in London has not commented on the hearing, which is due to hold another four-day session in September.