Has Putin gagged his ‘lovechild’ after she bragged about her mother’s Monaco penthouse? Teenager has not posted on social media for two months, sparking concern from her followers

A young woman who is believed to be the lovechild of Russian president Vladimir Putin has not posted on social media for more than two months, sparking concern from her followers that she has been silenced.

Luiza Rozova, also known as Elizaveta Krivonogikh, regularly posted on the social media platform Instagram until October 1. The 18-year-old has not posted since.

Since being ‘outed’ by Russian website Proekt last year, the student became a social media star with 82,5000 followers, her own fashion line, and is in demand as a DJ. In recent months, she spent time in Paris despite the Covid-19 restrictions.

But now, concern is growing over the teenager – who bears a striking resemblance to Putin – who has not posted to her thousands of Instagram followers since October 1, when she posted a picture of a foot poking out from under a duvet next to a laptop. 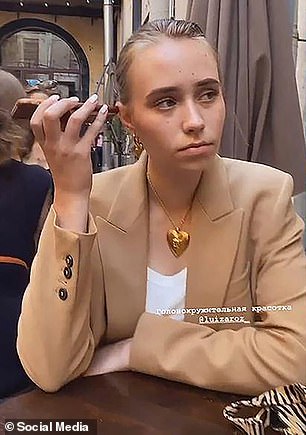 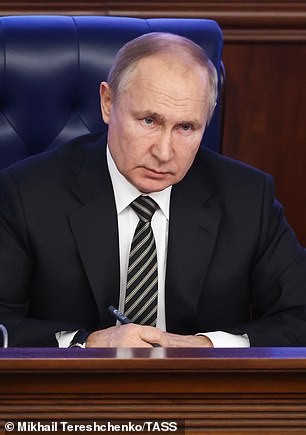 Luiza Rozova (left), also known as Elizaveta Krivonogikh, regularly posted on the social media platform Instagram until October 1. The 18-year-old has not posted since. Ms Rozova’s mother Svetlana, 46, is alleged to be the mistress of Russian president Vladimir Putin (right) 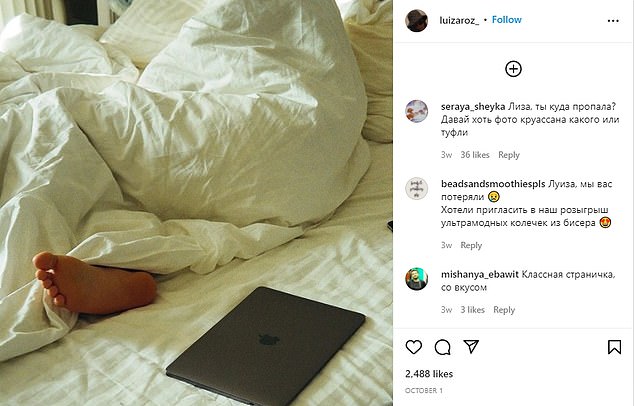 Concern is growing over the teenager – who bears a striking resemblance to Putin – who has not posted to her thousands of Instagram followers since October 1. Pictured: Her last post

‘You completely abandoned Instagram for some reason … Please come back Luiza’ one of her followers wrote.

Another asked: ‘What happened? Pa forbade the details of the luxury life to be published?’

Throughout her 206 posts to the platform, Ms Rozova already made an effort to hide or obscure her face where possible, suggesting she did not want her identity known.

Ms Rozova’s mother Svetlana, 46, who is alleged to be the mistress of Putin reportedly enraged the Russian strongman when she posted pictures that she tagged as being taken in Monaco.

One showed a firework display, one of a rainbow overlooking the ocean, and a third showing yachts in the harbour. On the yacht photo, which was posted in 2014, daughter Luiza replied with comment which said: ‘Beautiful! I know this place!’

The posts confirmed the pair have links to Monaco, following the revelation that Krivonogikh owns a $4million apartment in Monte Carlo that was purchased for her via an offshore firm shortly after her daughter’s birth.

Krivonogikh’s ownership of the fourth-floor home, located in the Monte Carlo Star apartment block just below the famous casino, was revealed in the Pandora Papers leak – which also revealed her total worth to be around $100million.

Her other assets, many of which are also controlled by offshore firms, include a yacht as well as shares of some of Russia’s most-valuable state-owned firms.

Neither Krivonogikh nor her daughter has commented on the disclosures, and in a televised broadcast in October, Putin demanded an end to ‘digging into the dirty linen of some elites’ by journalists.

Putin also blocked Proekt – the website that identified the cleaner-turned-millionaire alleged mistress and her ‘£74m business empire’, as well as Ms Rozova.

Luiza Rozova’s mother Svetlana Krivonogikh posted this image of Monaco’s harbour from Monte Carlo, which her daughter and alleged Putin lovechild commented on – saying: ‘I know this place!’ The picture and exchange reportedly infuriated Vladimir Putin

Svetlana Krivonogikh, 46 and believed to be Putin’s mistress, owns a $4million apartment in Monte Carlo through a secretive offshore firm, the Pandora Papers revealed this year

Putin’s relationship to Svetlana supposedly ended around the time he was first romantically linked to Olympic gold medal winning gymnast Alina Kabaeva, 38, an ex-MP who is now head of a major pro-Kremlin media company.

Neither Kabaeva nor the Kremlin has confirmed such a relationship.

Putin has two daughters by his ex-wife Lyudmila, both born when he was a KGB spy.

Putin was once told by a BBC Russia reporter that it was an ‘open secret’ that Maria and Katerina were his children, but he declined to confirm the rumour.

Speculation that he has a family with Kabaeva have been met with official denials, but the rumours persist.

Putin has previously said: ‘I have a private life in which I do not permit interference. It must be respected.’ 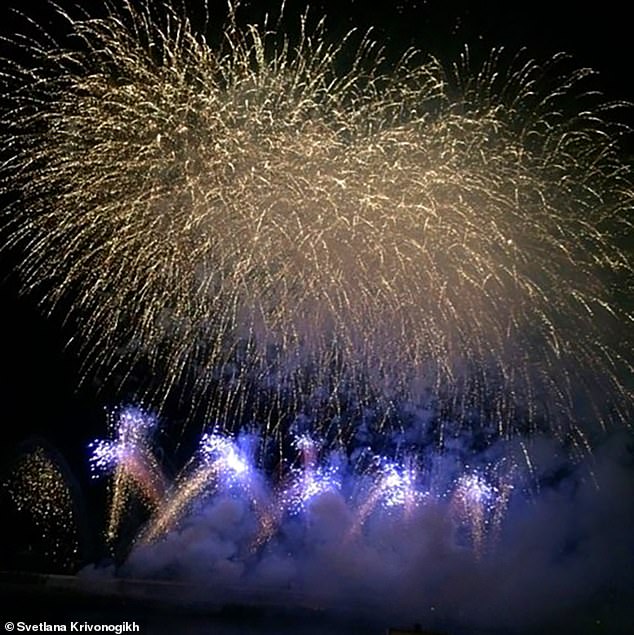 Photos posted to Krivonogikh’s social media further linked her with Monaco, including this one of a firework display over the ultra-rich enclave 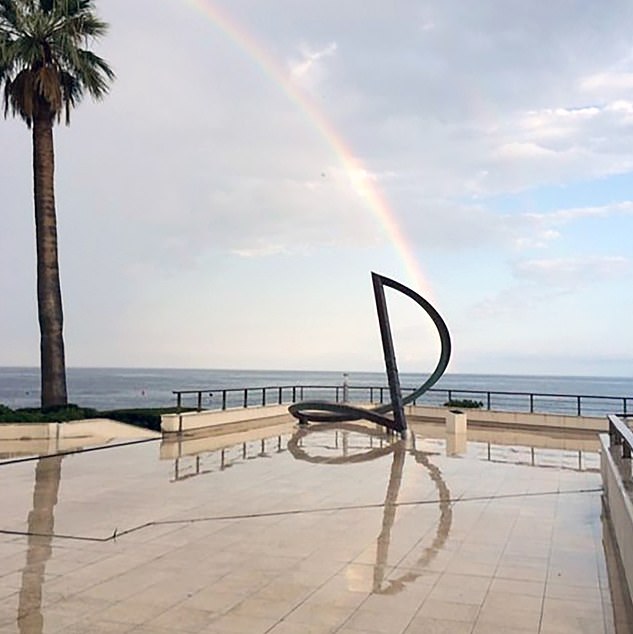 Another image from Krivonogikh’s social media showed a rainbow over an ocean view, which she also tagged as being taken in Monaco

Kabaeva is on record as saying she had met an unnamed man who ‘I love very much’, gushing: ‘Sometimes you feel so happy that you even feel scared.’

The Pandora Papers were the largest-ever leak of data relating to offshore companies which are used by the ultra-wealthy to conceal their assets, potentially allowing them to avoid large amounts of tax.

According to a tranche of documents contained in the leak, in 2003 — shortly after giving birth — Svetlana Krivonogikh secretly acquired a fourth-floor flat in the Monte Carlo Star, an apartment block beneath the city’s famous casino. It boasts two parking spaces and access to the complex’s luxury pool and spa.

Svetlana Krivonogikh controls the property via two Panamanian shell companies which, in turn, control a third firm in Tortola, in the Virgin Islands.

The secret ownership structure was created by Moores Rowland, a Monacan tax firm run by one Eamonn McGregor, a Merseyside-born former accountant who trained at the UK retail giant Littlewoods and today represents a host of associates of Putin.

Gennady Timchenko – a bureaucrat-turned-oil trader worth an estimated $22billion – is also a client of McGregor via Monte Carlo-based accounting firm Moores Rowland.

McGregor has looked after Timchenko’s assets for two decades, the papers reveal, among them jets and a 130ft yacht called M/S Lena.

Also named in the papers is Petr Kolbin, a childhood friend of Putin whose family owned a house in the village of Imenitsy that Putin’s parents rented when he was growing up.

Kolbin initially worked as a butcher, but in 2001 – shortly after Putin became president – his fortunes suddenly changed. He went into business and prospered, largely thanks to deals with some of Russia’s biggest state-owned firms.

He, too, became a client of Moores Rowland and opened several overseas bank accounts that contained a fortune of $550million.