A police officer who shouted ‘chill out or I’ll choke you out’ while arresting a suspect has been named ahead of a disciplinary hearing.

PC Graham Kanes is set to face a bosses later this month and will answer allegations that the force he used to restrain a man in Halifax, West Yorkshire last summer was ‘not reasonable, necessary or proportionate’.

The police officer will also answer misconduct charges that his comments were ‘unprofessional and unreasonable’ under the circumstances of an ongoing arrest.

PC Kanes is also accused of lying to fellow officers when recalling the incident that took place on August 16, 2020 after he claimed the man had punched him.

In footage that was widely circulated across social media at the time, the officer pushes the man up against a car in Halifax, West Yorkshire, before pulling him to the ground while arresting him on suspicion of assault.

Footage showed the man waving his hand across his throat during the arrest. But PC Kanes appeared to try to hit him during the incident, shouting: ‘Chill out or I’ll choke you out. Chill out, or you’re going to sleep. Chill out, chill out.’ 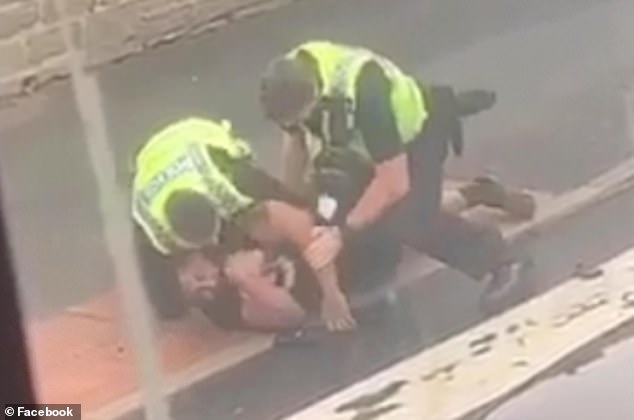 PC Graham Kanes is set to face a bosses later this month and will answer allegations that the force he used to restrain a man in Halifax, West Yorkshire last summer was ‘not reasonable, necessary or proportionate’.

In the footage, filmed just months after the high-profile death of George Floyd in Minneapolis, the officer parked up their marked police van to arrest the man on suspicion of assault.

He was filmed flinging the man, wearing black cycling shorts, into into the back of a van as he pleaded: ‘Look. What have I done?’

PC Kanes then appeared to grab the man around the neck and wrestled him to the ground on a zebra crossing between roadworks before placing him in an arm lock.

The officer was then heard telling the man to ‘chill out or I will choke you out’ as a colleague moves in to assist in the arrest. The man reportedly was shouting: ‘I can’t breathe. I give up, I give up’.

Both officers, wearing yellow high visibility vests, were seen to kneel on the man before the first one bellowed: ‘Turn over. Turn over. Now.’

The officer then flipped the man over onto his stomach. Both officers then pinned his arms behind his back and knelt on his shoulders while radioing for back up.

Detectives said they urgently investigated the video after it was circulated on social media and the officer has been removed from frontline operational duties. They also voluntarily referred the incident to the Independent Office of Police Conduct.

West Yorkshire Police is understood to be considering dismissing PC Kanes due to the severity of the misconduct charges. 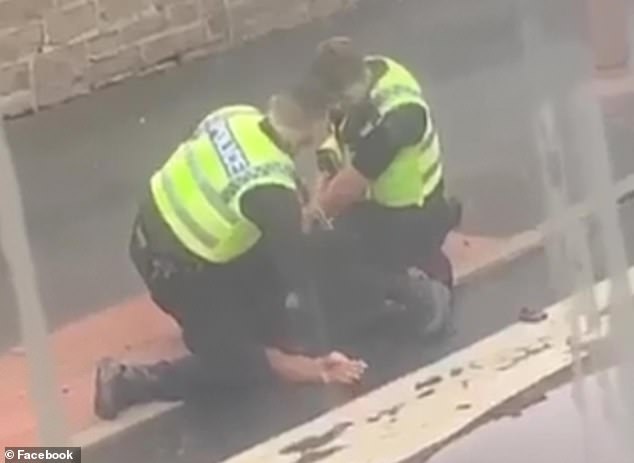 One of the officers shouted: ‘Chill out or I’ll choke you out. Chill out, or you’re going to sleep’

Outlining the three allegations of misconduct PC Kanes is facing, the force said: ‘One, the force used to restrain the male was not reasonable, necessary or proportionate.

‘Two, by telling the male that the officer would “choke him and you’re going to sleep” was unprofessional and unreasonable in the circumstances.

‘Three, the statement you provided describing that the male had “punched” you was not an accurate or truthful report of what had happened.

‘The matter set out above is alleged to amount to gross misconduct and is so serious as to justify dismissal.’

PC Kanes will face his four-day misconduct hearing which starts on November 15.