Imposing fines of up to £10,000 on people who fail to self-isolate could be counterproductive and increase ‘resentment’, one of the Government’s scientific advisers has said.

She said the fines could also undermine trust in NHS Test and Trace because they could deter people from getting tested or prompt them to try to conceal symptoms.

The new fining regime will come into force in England from September 28 with penalties starting at £1,000 and rising to up to £10,000. 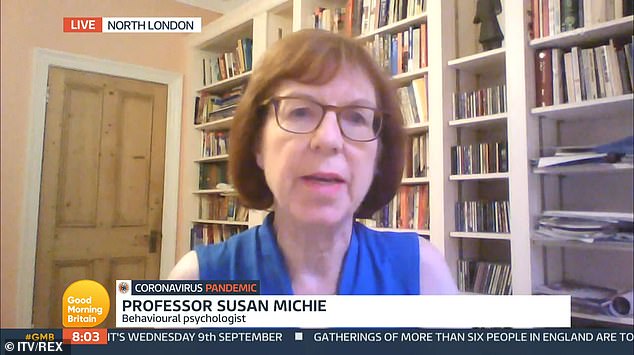 There are growing fears that the fines will hit people on lower incomes the hardest because one of the main reasons for failing to comply with quarantine rules is a need to go to work.

The Government is bringing forward a system of payments worth £500 for people on low incomes who have to self-isolate but critics believe that will not be enough to persuade some to stay at home.

Prof Michie argued that better support for people in self-isolation is the way to increase compliance rather than the threat of massive fines.

She told The Telegraph: ‘It will set up resentment and divisions. If things are perceived not to be fair, then this undermines trust, in turn undermines adherence.

‘The fines could actually be counterproductive by alienating people.’

She said experts have long been urging ministers to boost support for people who have been told to self-isolate by NHS Test and Trace.

‘None of these things have been done by the Government in the way we have advised over literally months,’ she added.

MPs have also expressed concerns that the fines could be prove counter-productive.

Fines will initially start at £1,000 rising to £10,000 for repeat offenders and for ‘the most egregious breaches’ including those who stop others from self-isolating, like an employer who asks a staff member to come into work in violation of an order.

The penalties are in line with those for people who fail to quarantine for 14 days after returning to the UK from a country not on the list of low-risk nations.

The new regulations will come into force in England on September 28, although ministers are discussing with the devolved administrations for Scotland, Wales and Northern Ireland about extending them UK-wide.

The heavy penalty is the latest in a series of financial punishments introduced by authorities aimed at deterring would-be rule-flouters amid a recent sharp upsurge in coronavirus infections.

Another 3,899 lab-confirmed cases of coronavirus in the UK were announced yesterday while a further 18 people died within 28 days of testing positive, bringing the UK total to 41,777.

Health Secretary Matt Hancock said there is a danger the infection rate could ‘shoot through the roof’ if people did not follow the the Government’s rules.

‘We have seen in the data that some people who need to self-isolate are not doing so,’ he told Sky News’s Sophy Ridge on Sunday programme.

‘If you have been asked to self-isolate then you either definitely have the coronavirus or you are highly likely to have coronavirus, and so it is mission critical that you isolate.

‘I am very worried about this second wave. We have seen in other countries around Europe how it can absolutely shoot through the roof.’