Council jobsworths have threatened a retired police officer with a lawsuit unless he removes a rowing boat he put next to a flood-prone river – because it’s on an Anglo-Saxon burial ground.

Neil Kenton, 61, placed the small wooden vessel on a patch of grass by the River Avon to help elderly residents who became trapped in their homes.

He offered up the boat in Emscote Gardens in Warwick after devastating floods wrecked residents’ homes in nearby Mercia Way in 1998.

But Warwick District Council have now ordered him to remove the boat because it sits on grassland designated as an ‘open space’. 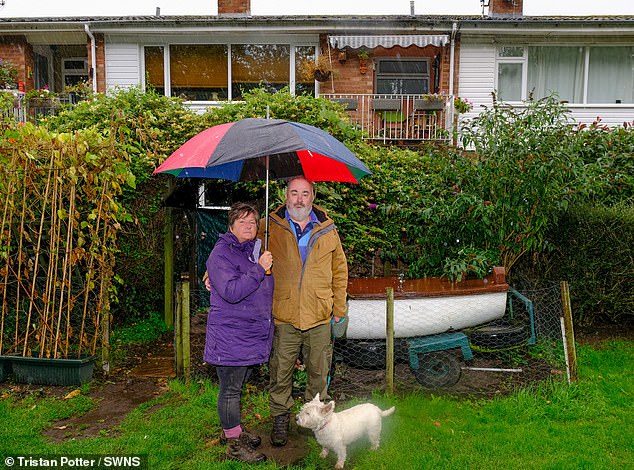 Neil Kenton, 61, placed the small wooden vessel on a patch of grass by the River Avon to help elderly residents who became trapped in their homes An aerial view shows the proximity of the housing estate to the river, which is prone to flood

It was given protected status after experts discovered it was the site of an ancient Anglo-Saxon burial ground.

Town hall chiefs have given Mr Kenton, a retired police officer, until the end of this month to remove the boat or face possible legal action.

Mr Kenton, who is a member of the Emscote Gardens Flood Action Group which was set up to lobby the council to improve defences, said: ‘The council failed to maintain the flood defences built here in the 1960s.

‘I have kept it on a very small, previously neglected postage stamp recess of open space at the back of my garden.

‘Our houses do not have big gardens as we back immediately onto the River Avon against the flood bank.

‘We know our immediate area well. We have accumulated a broad in-depth knowledge of the river, the flood defences and the land.

‘During the Easter floods of 1998, our road went underwater. You couldn’t have sprinted quicker than how quick the water was going up.

‘This was simply because the flood defence outflow flaps had rusted open and let the river in.

‘We then realised that the local authorities were neglecting their flood defences.

‘I bought and sited the little white boat here because it took seven years of campaigning and petitioning thereafter to persuade Warwick District Council to get someone to replace these old iron flaps.

‘During this time the council left us openly at risk.

‘It has now been 22 years but the council have continued to fail us in their duty of care to maintain the flood defences, with continued neglect and inappropriate development. 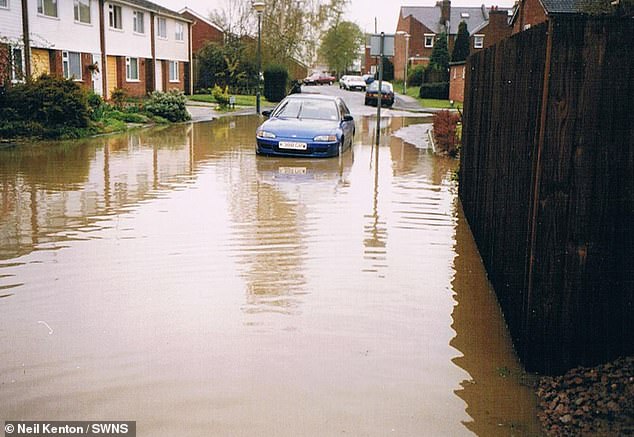 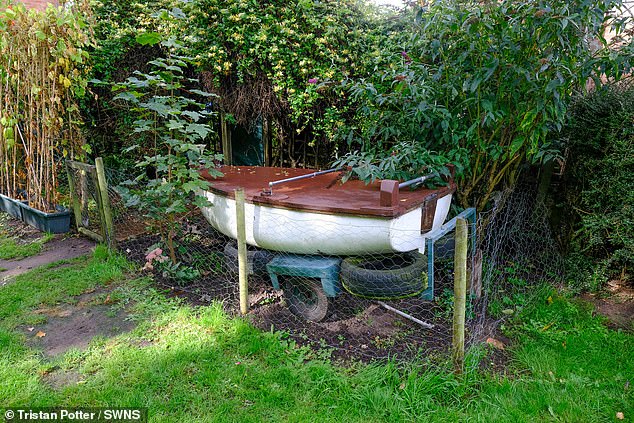 But Warwick District Council have now ordered him to remove the boat, pictured, because it sits on grassland designated as an ‘open space’

‘I know this because the boat has been there since 1998 and now suddenly it is a massive matter and started giving me deadlines to move it.

‘It is simply a service and supply boat for the lower estate riverside, to be pushed along pavements covered by water, in waders, through potentially contaminated still floodwaters up to dry ground.

‘This little white boat provides a symbol of reassurance, a control measure for a good community with resilience and neighbourhood mettle who have always taken care of one another well, particularly during the recent pandemic.

‘There is no noticeable encroachment on open space given the extensive fencing and housing development either side of our original houses.

‘The boat is not for going on the river, it’s for going down the road in case of a flood.

‘The council said it’s dangerous because of potholes and not knowing what is underneath.’

Mr Kenton now has until the end of the month to remove the boat or he risks facing further action.

A spokesperson from Warwick District Council said: ‘The boat in question is placed on an area of this councils ‘open space’ that is located at the rear of some houses on Mercia Way (an area that was once the site of an Anglo-Saxon burial ground).

‘This council does not permit other parties to place/store their private property on this councils ‘open space’ and, as a result, in June 2020 we asked for the boat to be removed by early September 2020 in order that the site can be left clear, as an open space, once more.

‘The boat is not required as part of Warwick District Council’s plans for flooding in the area.’