Councils face desperate battle to clamp down on a wave of illegal parties at luxury Airbnb properties blamed for spreading coronavirus as 100 revellers cram into £3.5million townhouse

Luxury properties rented out through Airbnb are hosting illegal alcohol-fuelled parties for young, wealthy revellers despite the risk of spreading coronavirus, The Mail on Sunday can reveal.

A three-bedroom flat at a Grade II-listed £3.5 million townhouse in London’s trendy Soho was used for four events within the space of the month.

More than 100 youngsters at one of those events – some arriving in sports cars and many wearing expensive jewellery – packed into the property where they gulped down Veuve Clicquot champagne and inhaled ‘hippy crack’.

One party at the flat on upmarket Carlisle Street on July 25 was so raucous that it was raided at 3am by enforcement officers from Westminster Council. Photographs show kitchen sideboards groaning with half-empty bottles of champagne and spirits and abandoned canisters of nitrous oxide scattered around bedrooms. 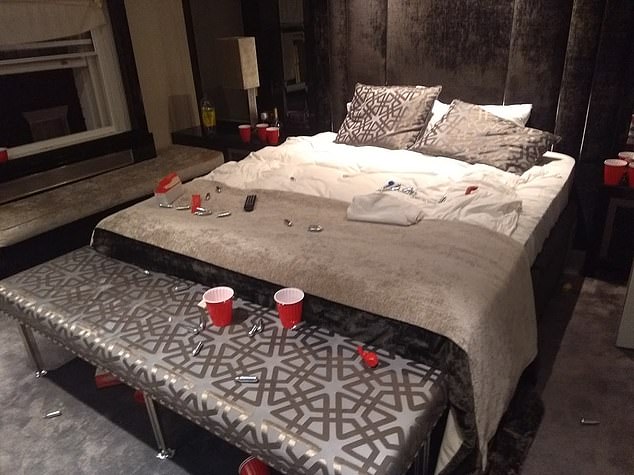 One party at the flat on upmarket Carlisle Street on July 25 was so raucous that it was raided at 3am by enforcement officers from Westminster Council. Photographs show abandoned canisters of nitrous oxide scattered around a bedroom (pictured) 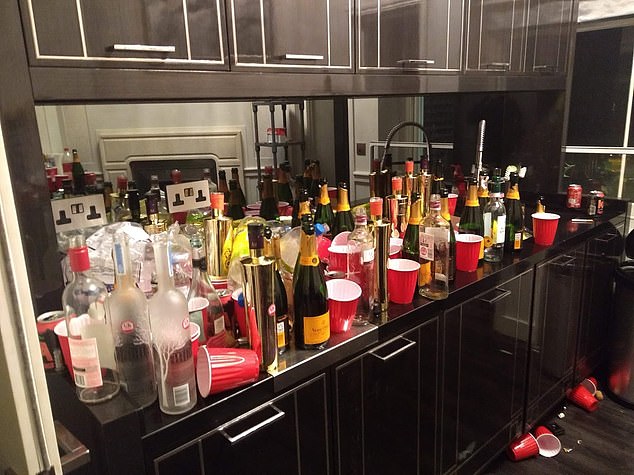 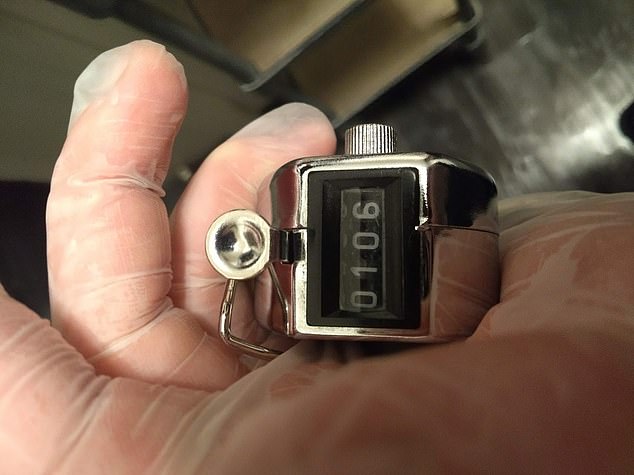 In addition to a DJ, a professional sound system and a cash bar, organisers had hired two bouncers, one of whom was found holding a ‘clicker’ that showed 106 people had been crammed into the property (pictured)

In addition to a DJ, a professional sound system and a cash bar, organisers had hired two bouncers, one of whom was found holding a ‘clicker’ that showed 106 people had been crammed into the property.

Recalling the series of noisy events, a night shift worker at the neighbouring Residence Hotel said: ‘I couldn’t believe what I was seeing.

‘More and more people arrived as the night went on and the party got louder and louder. And it kept happening, week after week.’

Mahesh Tulsiani, who rents out his flat for £710-a-night, said that he had no inkling that it was to be turned into an illegal pop-up nightclub when a ‘well-spoken and polite’ man came to collect the keys.

Mr Tulsiani, who has been served with a noise abatement notice by the council and was one of the first property owners in Britain to be given a prohibition notice under new Covid-19 lockdown regulations, added he was considering legal action against the men who had rented the property. 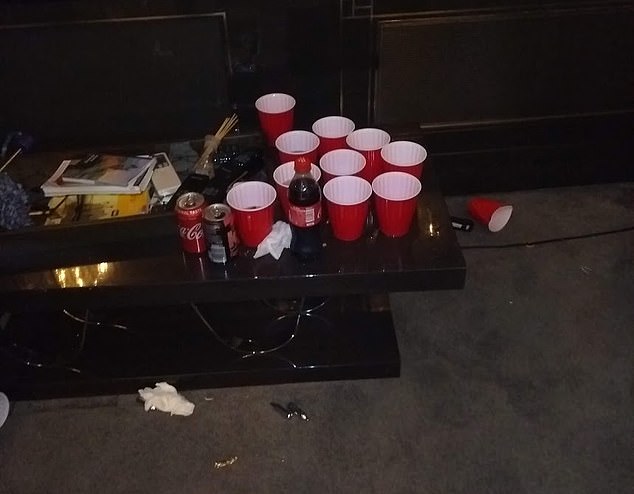 Mahesh Tulsiani, who rents out his flat for £710-a-night, said that he had no inkling that it was to be turned into an illegal pop-up nightclub when a ‘well-spoken and polite’ man came to collect the keys. Pictured: Cups and cans from the party 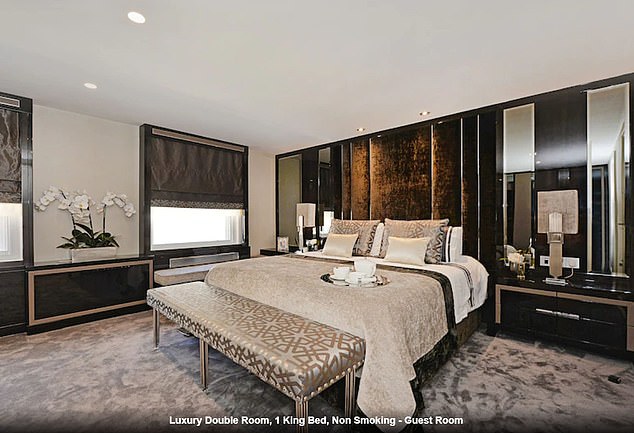 The flat has now been removed from Airbnb but was last week still available on other short-term rental sites including Booking.com and Expedia. Pictured: An advert for the flat online

‘We made it very clear that parties were forbidden and were appalled when we found out what happened,’ he said.

‘We know that these men who rented the property have not actually been blacklisted by the short- term rental companies. Frankly, we think they could do more to stop these parties happening by introducing better checks.’

Landlords forced to install CCTV to stop partygoers taking over

Desperate homeowners are resorting to installing cameras in an effort to deter illegal Airbnb lockdown parties.

BBC broadcaster Hannah Fry recently discovered that the owners of a property rented by her family had fitted it with CCTV. ‘Renting a nice house in the country with my family for a holiday & just realised there are cameras right outside the bedrooms recording everything. I mean… that’s not okay, right? What would you do?’ she wrote on Twitter.

Under Airbnb’s rules, hosts must make it clear to a guest if there are any security cameras or other recording devices in or around the property.

In May, an Airbnb landlord discovered 12 revellers had sneaked into his flat for a lockdown party after watching his CCTV doorbell footage.

The landlord said he received a booking for the apartment in Notting Hill, West London, and warned the customer that only two people could be inside the property at once.

But he was woken at 1am by a call alerting him to activity outside the front door. In a CCTV clip from the doorbell, at least 12 people are seen sneaking inside the property.

Footage shows two men initially unlocking the front door, before a woman attempts to duck down below the camera to avoid being seen entering what became an illegal rave.

The problem has become so bad that even neighbours of Airbnb properties are installing cameras. One man claimed on social media that he has put cameras by his windows and front door because 22 of the 25 properties in his block were owned by the same person, who is letting them out for parties.

The flat has now been removed from Airbnb but was last week still available on other short-term rental sites including Booking.com and Expedia. A Booking.com spokesman said: ‘We have been investigating thoroughly and are working proactively with Westminster Council to help resolve and prevent instances like this occurring in the future.’

Expedia said it has ‘paused future bookings for the property while we investigate closer’.

Although that may come as a relief to immediate neighbours, an investigation by The Mail on Sunday shows no shortage of young people looking to party after lockdown – nor of organisers eager to cash in.

Last week, we told how 140 revellers crammed on to a canal boat for an illegal rave in East London where Class A drugs were openly consumed .

As Home Secretary Priti Patel this weekend condemned the ‘selfish’ organisers of illegal raves, local residents were sharing grim tales of raucous parties. Siobhán McSweeney, a star of the Channel 4 sitcom Derry Girls, took to Twitter to complain about problems in her area of Westminster.

‘If you are a landlord with @Airbnb_uk, rent a party house in a residential area F*** YOU,’ she tweeted yesterday.

‘If you rent a place with the intent to hold a rave with 100s of people in the middle of a pandemic F*** YOU. If you go to one of these parties despite knowing how people died alone, horribly- F*** YOU. This is getting ridiculous now. We neighbours have lodged a trillion complaints. The property is listed on Booking.com and Airbnb. Parties/Raves/Clubs are f****** banned. Shut it down!’

Across Westminster, there were 30 complaints about illegal parties last month, up from 12 in June and only one in May. One of them on Soho’s Brewer Street involved 80 people packed into two flats in the same building.

Councillor Heather Acton, Westminster City Council Cabinet Member for Public Protection and Licensing, who has led the campaign against short-term rental parties held in lockdown, said: ‘Our community is growing exasperated with the number of loud, disruptive and unsafe parties taking place in residential homes across Westminster.

‘Of course the pandemic has had an enormous impact on many people’s social lives but we are now seeing residential properties turned into “pop-up” nightclubs with more than 100 people crowding into small flats for unlicensed music events, often accompanied by drug dealing. It’s a dangerous trend which causes significant disruption and puts lives at risk with attendees ignoring social distancing guidance.’

Metropolitan Police Commander Ade Adelekan said: ‘Unlicensed music events are illegal and the Met will not allow these unregulated and often dangerous events to go ahead.

‘Communities do not want these disruptive events on their doorsteps and we would ask anyone who has information on events which are being organised to contact police.’

Earlier this month, Airbnb introduced a global ban on all parties and events on its listings.

It has also banned under-25s with repeat negative reviews from using its platform in the UK, France and Spain to book whole properties in their local area.

Asked about the Carlisle Street flat, an Airbnb spokesman said: ‘We have zero tolerance for illegal activity, removed the guests from the platform at the time and the listing is not available on Airbnb.’

‘Illegal raves made me fear for my son’s life’: Selfish revellers at an Airbnb party are accused of making a four-year-old boy with a breathing condition ill with plumes of cannabis smoke

Jonathan Bucks for The Mail On Sunday

Selfish revellers at an illegal Airbnb party have been accused of making a four-year-old boy ill with plumes of cannabis smoke.

Adam Jones, 30, said his son Theodore, who had spent months self-isolating due to a breathing condition, suffered an attack after acrid smoke wafted into the family’s apartment.

He said that two flats at the Luxury Grange Apartments block in Coventry have played host to a string of illegal parties since March, with dozens of revellers coming and going at all hours of the day and night.

‘It has been hellish for months with parties starting at 10am and going on until 4am the following morning,’ said Mr Jones. 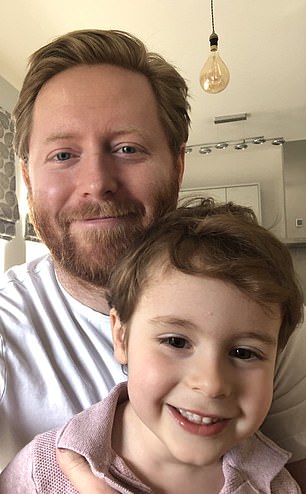 Adam Jones, 30, said his son Theodore, who had spent months self-isolating due to a breathing condition, suffered an attack after acrid smoke wafted into the family’s apartment

‘There is loud music, drug taking and general anti-social behaviour in all the communal areas.

‘It has left me and my son terrified to go outside.’

The IT engineer is particularly worried about the risk of a constant stream of people introducing Covid-19 into the block. ‘Whenever we go outside, I tell Theodore not to touch the bannisters on the stairs or door handles,’ he added.

‘We always find nitrous oxide canisters in the car park and I tell him not to touch any of them.’

Despite repeatedly informing the owners of the properties about the parties, Mr Jones claims nothing has been done to stop them.

Last night, both properties were still available on Airbnb. Priced at £226 for a minimum of two nights, one listing describes it as ‘a luxurious tastefully furnished modern two-bedroom apartment in a quiet and grand new development offering excellent amenities’, adding: ‘Well suited for business professionals, couples and solo adventurers who like and appreciate luxury.’

Mr Jones said the parties began when lockdown was imposed in March. In the worst incident, Theodore started having breathing problems at 3am which Mr Jones attributes to him inhaling cannabis smoke. ‘I didn’t know whether to go outside and have to go past all the people drinking and smoking,’ he said. ‘I was also nervous about taking Theodore to hospital where he would run the risk of catching the virus.

‘It’s outrageous that I was put in that position at all, fearing for my son’s life because of these selfish people.’

He described weekly parties throughout the summer with often around 40 revellers. Cleaners would come in to tidy up the mess before more people arrived.

‘They trashed the communal area and the car park. The owners are definitely breaking the terms of the lease but they don’t seem to care,’ he said. Mr Jones also claimed that calls to the police went unanswered and that he and other residents are now considering installing CCTV in an effort to deter further illegal events.

‘I can’t believe it’s come to this, that we’re have to put up cameras in our block of supposedly luxury flats to keep us safe,’ he said.

West Midlands police, Airbnb and Morris Homes, which manages the block of apartments, did not respond for comment.

08/29/2020 World News Comments Off on Councils face battle to clamp down on illegal parties at Airbnbs
Recent Posts
We and our partners use cookies on this site to improve our service, perform analytics, personalize advertising, measure advertising performance, and remember website preferences.Ok