THE government is set to announce its plans for Covid quarantine in hotels today as Brits abroad brace themselves for mandatory isolation.

Vaccines minister Nadhim Zahawi said a decision on quarantining UK visitors in hotels was likely to be announced on Tuesday.

Mr Zahawi said the UK reviews its border policy "like any other responsible country," adding that Germany and Canada took action on travel in January.

He told Sky News this morning: "There will be an announcement on this issue later on today.

"I can only say to you that it is the right thing to do because I am the vaccines minister, that as we vaccinate more of the adult population, if there are new variants like the South African or the Brazilian variants, we need to be very careful."

There will be an announcement on this issue later on today […] if there are new variants like the South African or the Brazilian variants, we need to be very careful.

Asked if people should hold off on booking a summer holiday, Mr Zahawi replied: "Absolutely."

"There's still 37,000 people in hospital with COVID at the moment, it's far too early for us to even speculate about the summer."

The vaccines chief said Britain has acted "very quickly" in response to new mutant strains spreading across the globe, insisting "it is important we continue to review our border policy".

"An announcement will be made when a decision has been taken," he confirmed.

It comes after Brits thinking of booking a fortnight of sunshine were last night warned the restrictions could last months — possibly even a year until the pandemic is beaten worldwide.

Experts said families faced forking out at least £1,000 to be “imprisoned” in UK hotels once they returned, effectively putting paid to foreign hols. 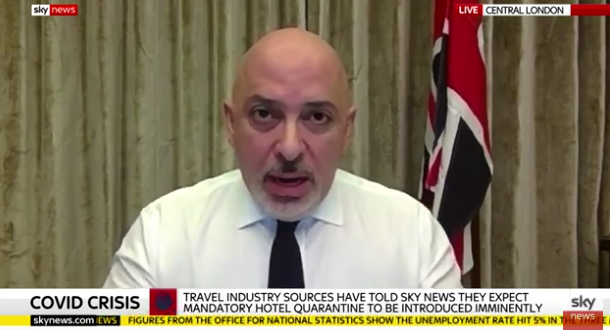 Ministers will meet today to sign off the plans aimed at stopping new mutant strains entering our shores.

Boris Johnson said: “We want to make sure that we protect our population, protect this country, from re-infection from abroad.

"So that idea of looking at hotels is certainly one thing that we’re actively looking at.

“We need a solution that gives us the maximum possible protection against reinfection from abroad.”

In the meantime, the new foreign travel rules are likely to make it impossible for families to plan or book their holidays.

Travel experts said they feared the quarantine system could last for a year as it has in Australia.

Paul Charles, founder and chief executive of The PC Agency, said: “There is a real fear within the industry that this could last for a year. It’s not just a short-term fix, and like Australia this could go on for some time and cut Britain off from the rest of the world.”

She said: “We implore the UK government to rethink the introduction of these extreme and sweeping border measures. WTTC is in no doubt they would destroy the UK travel and tourism sector as we know it.”

Heathrow bosses said it would be “effectively the closure of our borders”.

But Health Secretary Matt Hancock said: “I think it is incredibly important that we are cautious at the border.”

Mr Hancock gave some glimmers of hope yesterday as he revealed "early signs" the lockdown is working with coronavirus cases falling in some parts of the country.

Infections fell to their lowest daily rate since before Christmas, with 22,195 people testing positive for the virus in 24 hours on Monday.

And daily deaths were also down to 592 after multiple days of more than 1,000 fatalities last week.