Singapore: Six weeks after entering a nationwide lockdown, Malaysia is in a state of paralysis.

Hospitals and their staff are overwhelmed, the unemployed are going hungry, the economy is reeling and the infection rate has continued to climb, reaching a level twice that even of COVID-ravaged Indonesia on a per capita basis. 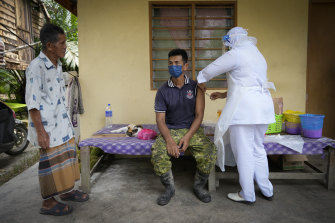 A nurse administers a Pfizer vaccine to a farmer outside his home in Sabab Bernam, a rural area in the state of Selangor.Credit:AP

Amid the death and despondency in the south-east Asian nation of 32 million, however, there is one silver lining.

Malaysia now boasts one of the fastest vaccination rates in the world, doling out more than 400,000 doses a day, out-performed in the past week only by Canada among countries of a similar size or greater – and double the pace of Australia.

Khairy Jamaluddin, the Oxford-educated Minister for Science, Technology and Innovation in charge of the rollout, told The Sydney Morning Herald and The Age the government had been able to accelerate inoculation after two months ago renegotiating the supply and delivery of the vaccines it has purchased, 70 per cent of which are Pfizer.

“Most of our portfolio is Pfizer and then we spread our bets,” he said. “We decided early on that it would be dangerous to put our eggs in one or two baskets.

Khairy Jamaluddin has procured 25 million doses of Pfizer for Malaysia to arrive between now and September. Credit:Bloomberg

“I think we are at the stage now where we really need to vaccinate ourselves out of the situation that we have found ourselves in.”

Aside from Pfizer, Malaysia has also sourced doses from China’s Sinovac, AstraZeneca and the single-shot Chinese vaccine CanSino, as well as others via the UN’s COVAX vaccine facility.

After a slow start, a quarter of the population has now received at least one dose and Malaysia’s target of having 40 per cent of adults fully vaccinated by the end of August and 60 per cent by the end of September could be achieved if suppliers meet their commitments.

Under Malaysia’s renegotiated deal with Pfizer, the American pharmaceutical giant is sending 25 million doses between this month and September, Khairy said.

The scale of the outbreak has helped offset another obstacle, vaccine hesitancy, as the country’s pandemic death toll rose to 6503 on Wednesday and new infections hit another daily record of 11,618.

Yet while Malaysia has sped up its jabs, it has done little to diminish dissatisfaction with the Perikatan Nasional government’s overall handling of the virus. It was just over a year ago, on July 7, 2020, that there were no new cases at all in the country and complacency has been blamed for its slide into despair.

“I think no response has been perfect anywhere in the world,” Khairy said.

“Countries which were successful at suppressing and containing cases have seen their bubble burst. And I think if you look at countries which are doing well, now, you can arguably say that they were doing much, much worse before and they’ve been saved by early arrivals of vaccines.

“Of course, we could have done certain things better. And also, after a while, it’s very difficult to get the public to adhere to the [restrictions] simply because of fatigue. And I’m not blaming the public here. Because to observe these very, very unnatural limitations and restrictions on your behaviour or your movements [is difficult]. Eventually, there will be a time where people just let their guard down.”

Khairy admits that headlines about government ministers flouting the rules has damaged the credibility of the latest lockdown, saying “leadership by example is very important”. 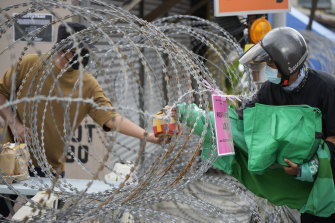 A resident, left, receives food from a delivery man through barbed wire at Segambut Dalam on the outskirts of Kuala Lumpur.Credit:AP

“I think on that score, we have made some errors there,” he said.

The admission comes as Prime Minister Muhyiddin Yassin clings to power. He has resisted a move to unseat him by Ahmad Zahid Hamidi, the president of the largest party in his ruling bloc, the United Malays National Organisation (UMNO), by installing UMNO vice-president Ismail Sabri Yaakob to Deputy Prime Minister and promoting another party figure, Hishammuddin Hussein, to the senior ministry.

Muhyiddin was also been prompted to recall parliament, which has been suspended since a state of emergency was declared in January, on July 26 at the urging of King Sultan Abdullah Ahmad Shah.

However, Fahmi Fadzil, an MP and spokesman for Anwar Ibrahim’s opposition People’s Justice Party, said there had not been any commitment to allow debate in the five-day sitting on emergency rule ordinances such as the so-called fake news law, which the government is accused of using to stifle criticism, and about the national recovery plan announced by Muhyiddin last month.

In the meantime, the health system is crumbling and the body count rising, with burned-out doctors having to “play God” in some instances to determine who survives.

In Fahmi’s electorate in the south west of Kuala Lumpur, barbed wire and food banks on street corners have been part of the furniture since the lockdown.

“There is a sense that they don’t know when this is going to end,” he said of his constituents.

The desperation of the situation has brought out the best in many Malaysians, with thousands coming to the aid of those appealing for food and cash to pay the rent.

But Dr Hartini Zainudin, a child-rights activist who is helping to coordinate assistance, said “this lockdown has been horrible” for those who have fallen into unemployment.

“It’s heartbreaking because [people are] holding up pictures of babies or their children or their elderly parents or taking videos and showing me their empty rice bins,” she said.

Little wonder that, as Khairy says, speedy vaccination is the only way out.

07/14/2021 World News Comments Off on Crushed by COVID, Malaysia now has one of the world’s fastest vaccination rates
Recent Posts