DAILY MAIL COMMENT: Let’s take back control of our immigration

Though it was by no means the sole reason for the referendum result, stricter control of our borders was a major factor in why many millions voted for Brexit.

The explicit manifesto promise of lower migration also persuaded so many to back the Tories at the 2019 general election.

Today, those voters would be forgiven for feeling deceived and disillusioned. Rather than stemming the tide, the solemn pledge to ‘take back control’ seems to have meant runaway levels of immigration.

Net annual migration has soared to a record 504,000 – equivalent to a city the size of Liverpool. A staggering 1.1million foreigners moved here in the last year. 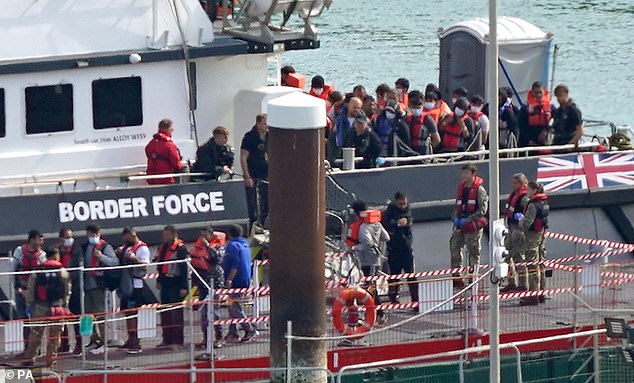 Disturbingly, that doesn’t even include the thousands of Channel migrants arriving illegally and with impunity.

Of course, some of the influx was down to Britain extending the hand of friendship to those fleeing war and persecution in Ukraine, Hong Kong and Afghanistan.

But even without these refugees, the sheer numbers coming here beggar belief.

Let us be crystal clear: The Mail is in no way against immigration. Indeed, the vast majority of migrants make a huge contribution to our economy and society.

But the UK has a chronic housing shortage, and the NHS, social services, schools and public transport are creaking. How on earth will we cope with the extra demand?

Yet outrageously, the Left still claim migration is too low, while business leaders seem unable to quench their insatiable thirst for cheap foreign labour.

Our immigration system has failed completely. Yes, Rishi Sunak is considering a visa clampdown. But this is too little too late. The Tories have had 12 years to sort this out – and have failed miserably.

Risibly, Labour claims only it can be trusted to repair the broken system. This from a party that over 13 years in government let uncontrolled immigration on an historic scale change for ever the country’s social and cultural landscape.

But something has to give. No one voted for mass immigration on this scale.

Unless the Tories tackle the crisis, their days in power will soon be numbered.

Considering the public is spending £3billion a week on the NHS, getting a face-to-face appointment with a GP should hardly be seen as an extravagance.

Troublingly, for countless patients that is precisely what it seems to have become.

In some parts of the country just one in eight is seen in person by their family doctor. And things will only get worse if GPs press ahead with their alarming threat to further slash their working hours.

The Mail is keenly aware that many have huge workloads. As well as carrying out record numbers of consultations, they are bogged down with bureaucracy.

But while virtual check-ups made sense during the pandemic, the excuse for keeping patients out of waiting rooms now that Covid has receded is wearing thin.

The truth is, telephone and video appointments are no substitute for the real thing. Signs of serious illness may be missed – with fatal consequences.

The best GPs know their patients personally – not just as an email address in their inbox or as a face on a screen.